The 55 and I were headed south on I-25 towards Walsenburg, Colorado.
We were on our way to the Goodguys Lonestar Shootout at the Texas Motor Speedway
But first I wanted to check out Colorado’s Scenic Byway of Legends. 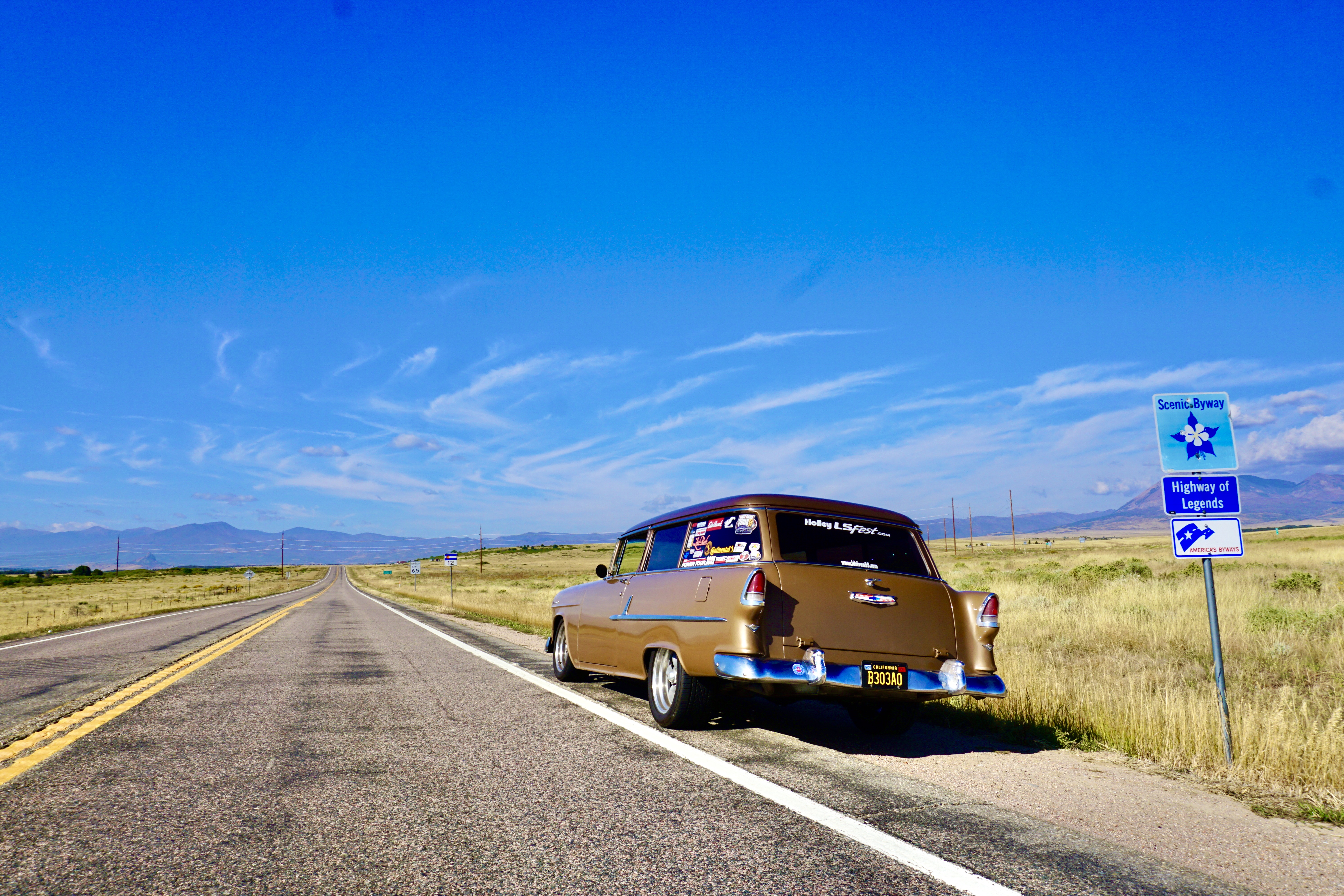 It’s one of Colorado’s newest nationally designated Scenic Byways.
Starting in Walsenburg and ending 80 miles later in Trinidad.
Get off of I-25 and take the road less travelled – the Scenic Highway of Legends.
In Walsenburg I stopped by the Post Office because I’ve got a thing for Post Offices for some odd reason.

I saw the marquee on the Fox Theater and I had to stop.

I tried to stop in to Sardi’s Bar for a lovely beverage – but it wasn’t open yet. 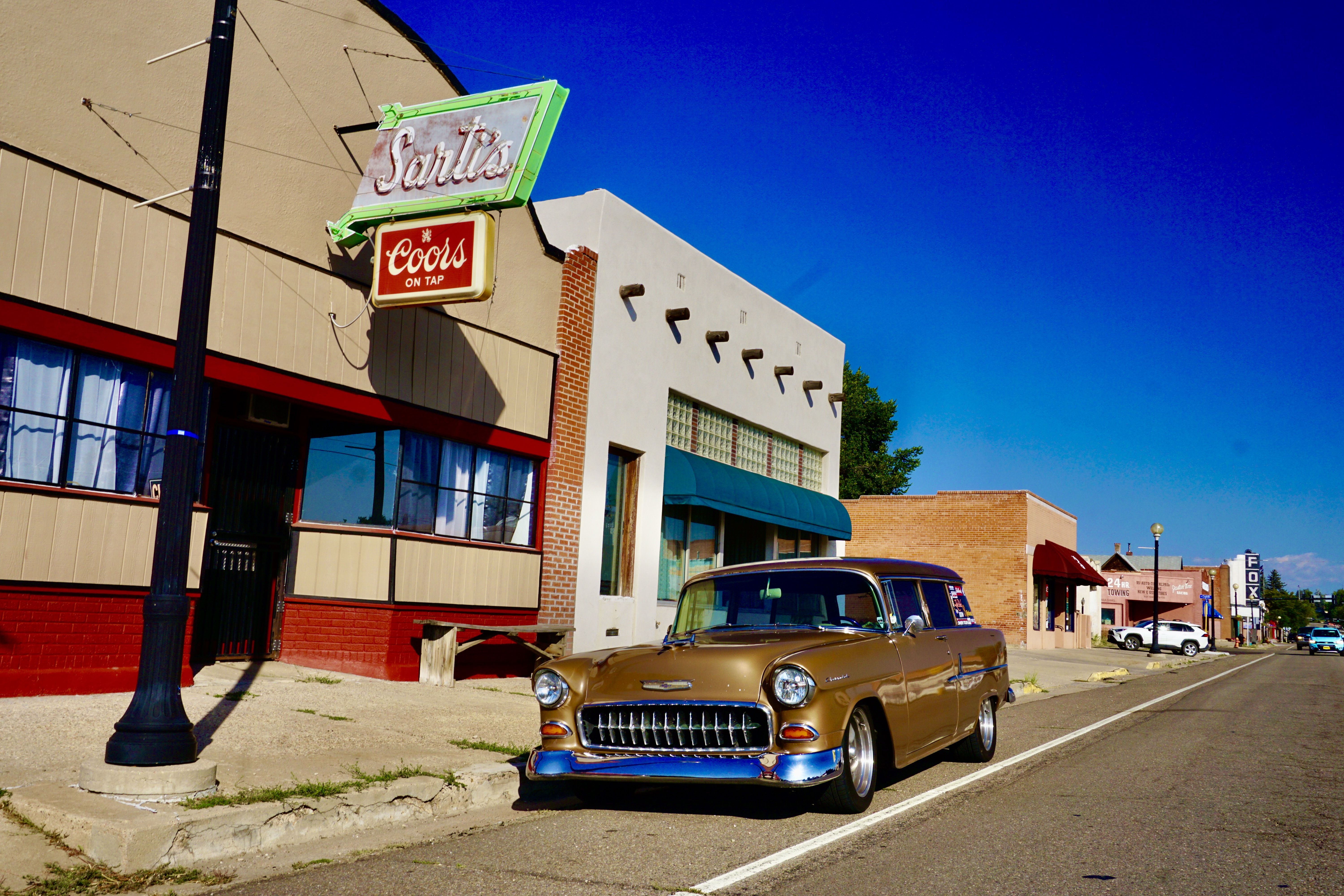 But I love that neon sign!
And the Anchor Motel for a quick photo before heading west on Highway 160. 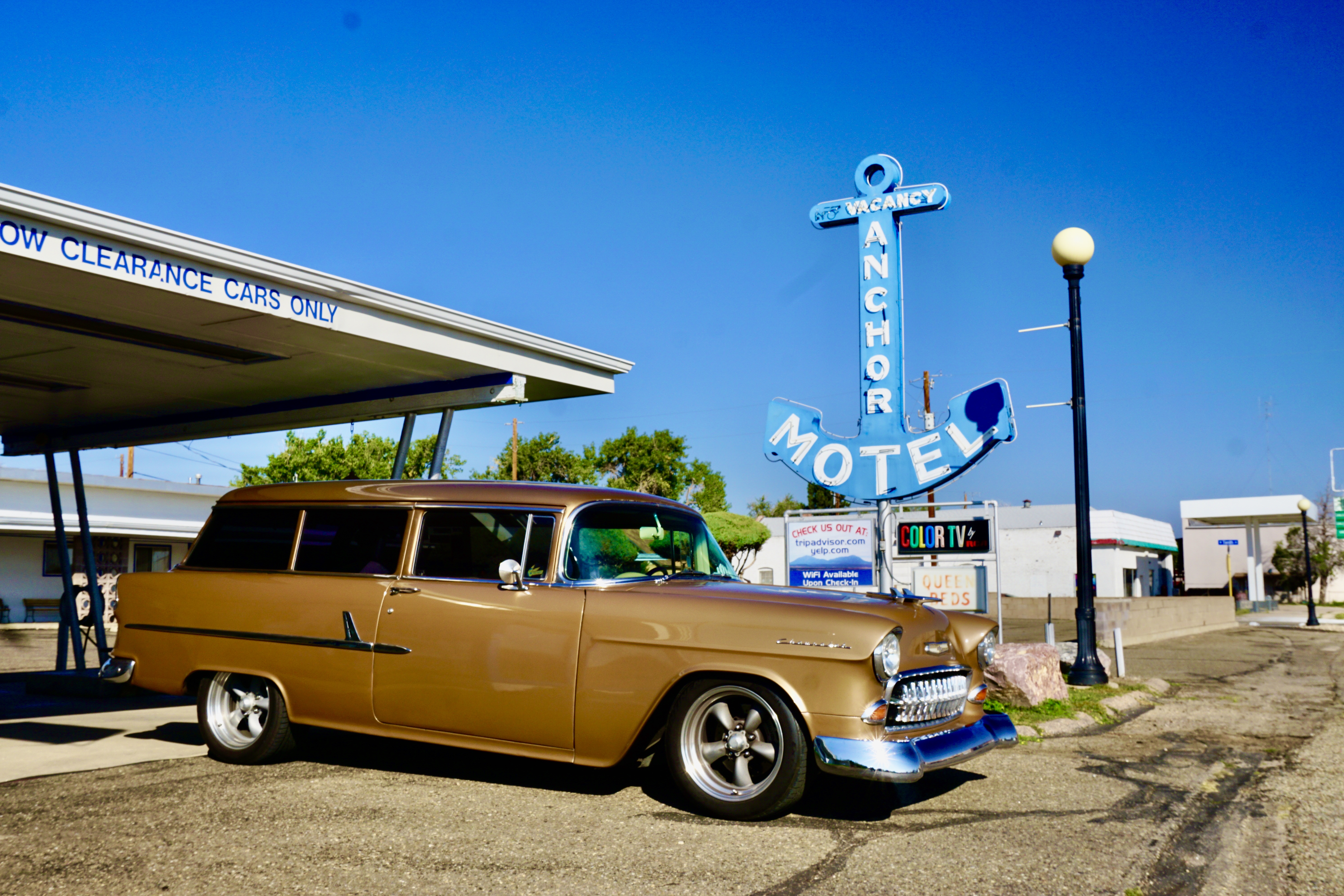 Once we got out of town we got to see the Spanish Peaks up close and personal.
After a few miles we turned off onto Highway 12 and headed towards La Veta.
And the La Veta Post Office. 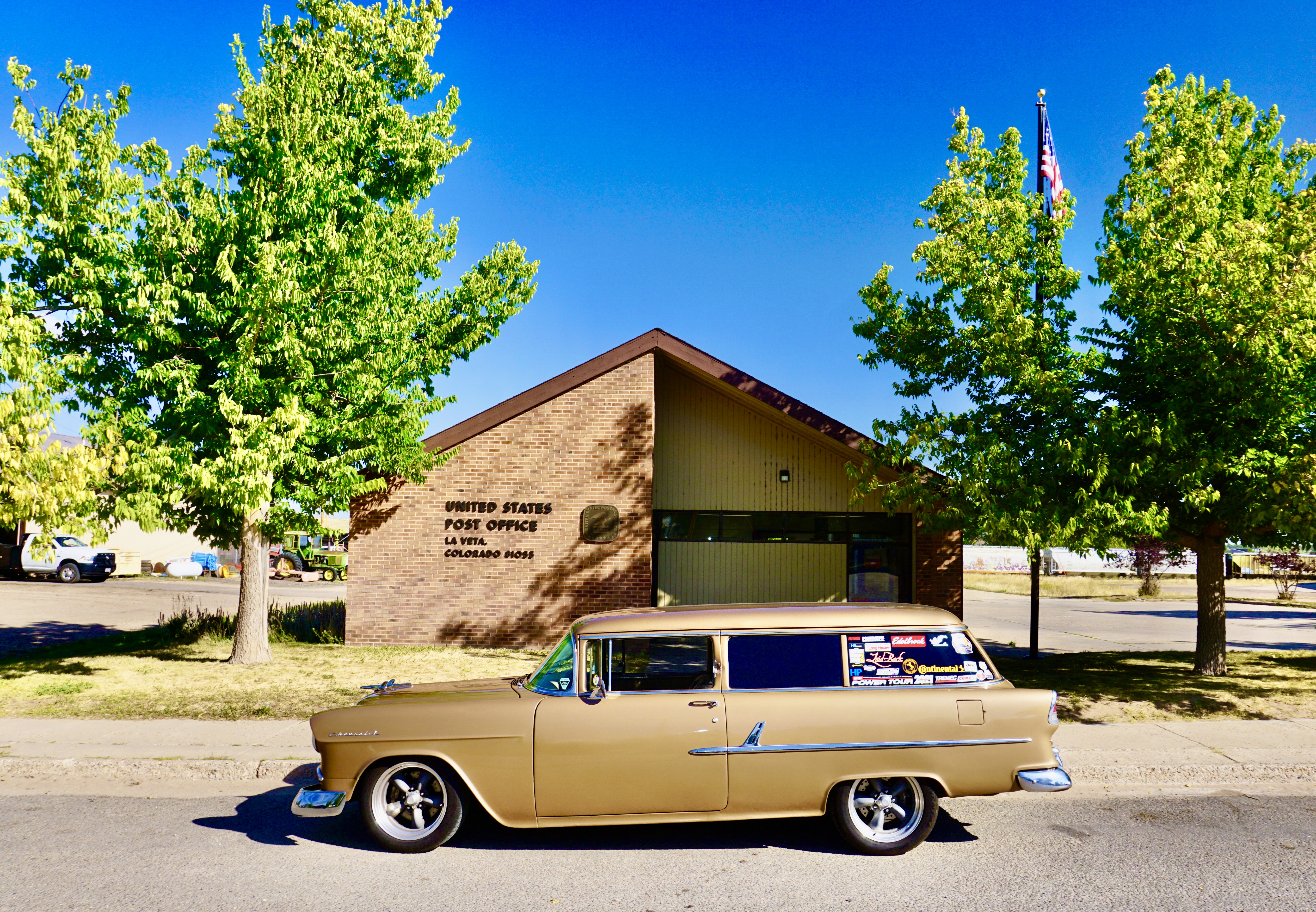 Highway 12 turns into Main Street in La Veta and then makes a couple of turns.
But if you keep an eye out for the Highway of Legends signs, you can’t go wrong.
This one has even been updated with an “America’s Byway” sign.

Highway 12 is a narrow two-lane blacktop and the speed limit is a fast as the car in front of you is going.
That means slow – and slow is good.
I get numb driving down the highway at warp factor 12 so it was nice to sit back and enjoy the drive.
And that’s exactly what I was doing when I spotted Dakota Dukes.

I pulled into Dakota Dukes – and to my embarrassment – The 55 stalled.
What the heck?!?
And wouldn’t you know it there were a few people who wanted to check out The 55 and offer suggestions as to why it stalled.
“Do you think it’s the altitude?” someone asked
“It’s not the altitude.” I responded
“We went up to the top of Mount Evans last week – that’s 14,130 feet above sea level – we’re only at 8650 here.”
Check out the drive up Mount Evans here.
I put it in neutral and it started up like nothing happened.
Weird.
After 10 miles it stalled out on me again with no rhyme or reason.
But it started right up again too – like nothing had happened.
I was out in the middle of nowhere on a narrow two-lane road with few pull-outs and with no cell phone reception.
Wonderful.
When I spotted the Stonewall Lodge I pulled into the dirt parking lot under a tree for a little shade and popped the hood.
That’s when I saw that my fuel pressure gauge was pegged at 100psi. 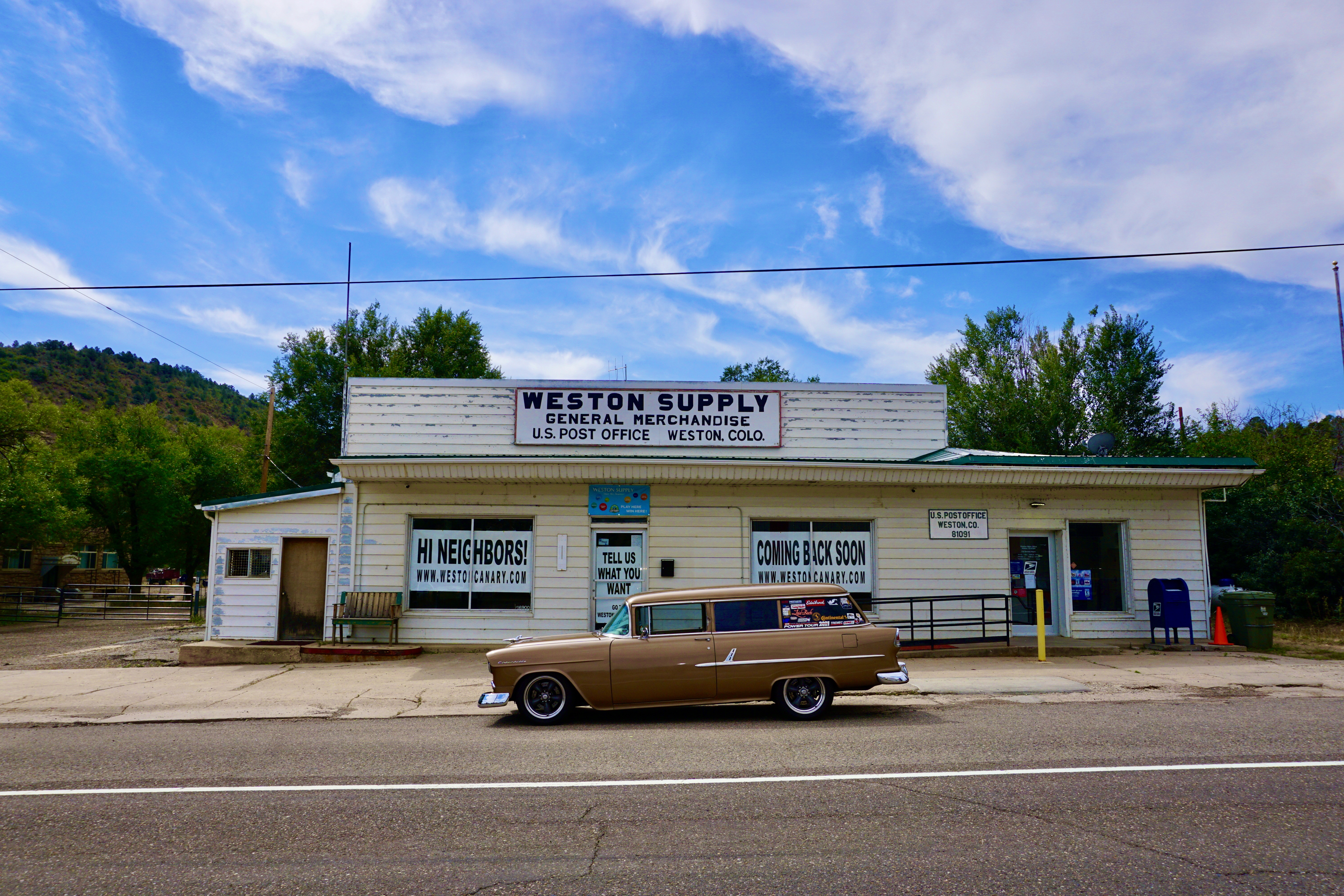 It got so bad that I didn’t even stop at the coke ovens in Cokedale for a picture – I just wanted to make it back to civilization and fix The 55.
We made it to Trinidad and I found an Autozone right off of I-25.
The young man behind the counter loved The 55 and gave me the Allen wrench I needed to take apart the fuel pressure regulator.
I took it apart, looked it over, cleaned it out with a can of Bra-kleen and put it back together.
100psi…
I had to get to DFW for the Goodguys and then Del Mar – what am I gonna do?
I called up my buddy Jim at The Garage in Denver and he said to bring it in.
Yeah yeah – sure sure – it’s only 200 miles – I can make it.
And so I did.
We made it there before the sun set and discovered whoever had put on the fuel filter had installed it backwards.
Doh!!
It’s a one-way filter and with it turned around the wrong way it created so much pressure that the ECU shut down the engine.
With the fuel filter installed in the right direction I was back on the road and headed to Texas.
But not before I stopped into Raton, New Mexico and the Santa Fe Trail – another one of America’s Scenic Byways.

The Santa Fe Trail is celebrating it’s 200th anniversary this year!
I had driven past Raton numerous times but I had never stopped in to check it out.
My first stop was the Motel Capri

Kinda like stepping back in time.
I found this mid-century modern gem behind the Budget Host Motel

I love the colors and the bricks.
Around the corner I spotted the Colfax County Building and I couldn’t resist. 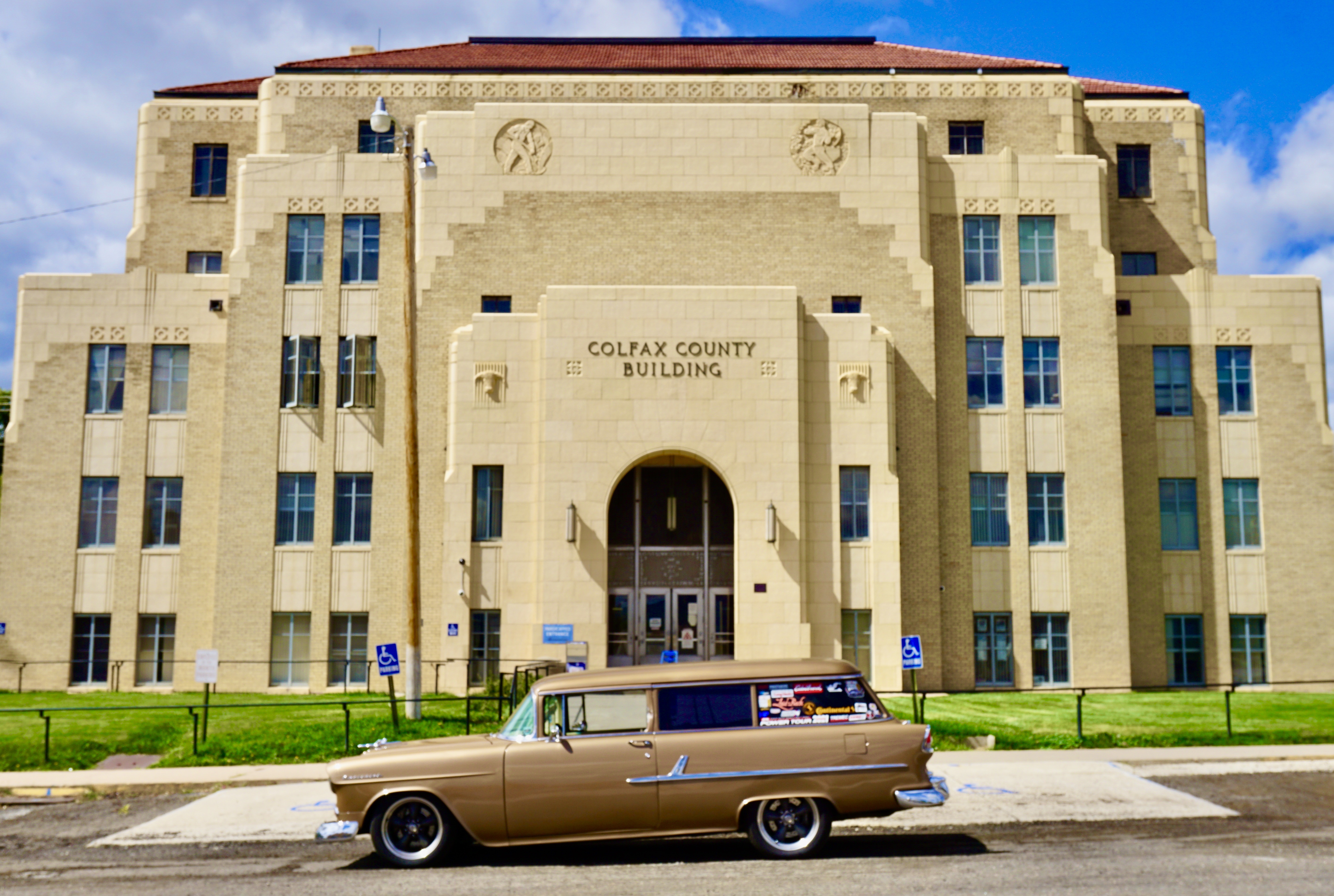 Raton is full of these old, mid-century abandoned buildings and I dig each and every one of ’em.

I’d love to see “Crystal Restaurant” all lit up in its neon glory.
Around the corner, we were still in New Mexico but there was the Texan Motel – and some cool clouds.

And the Village Inn Motel 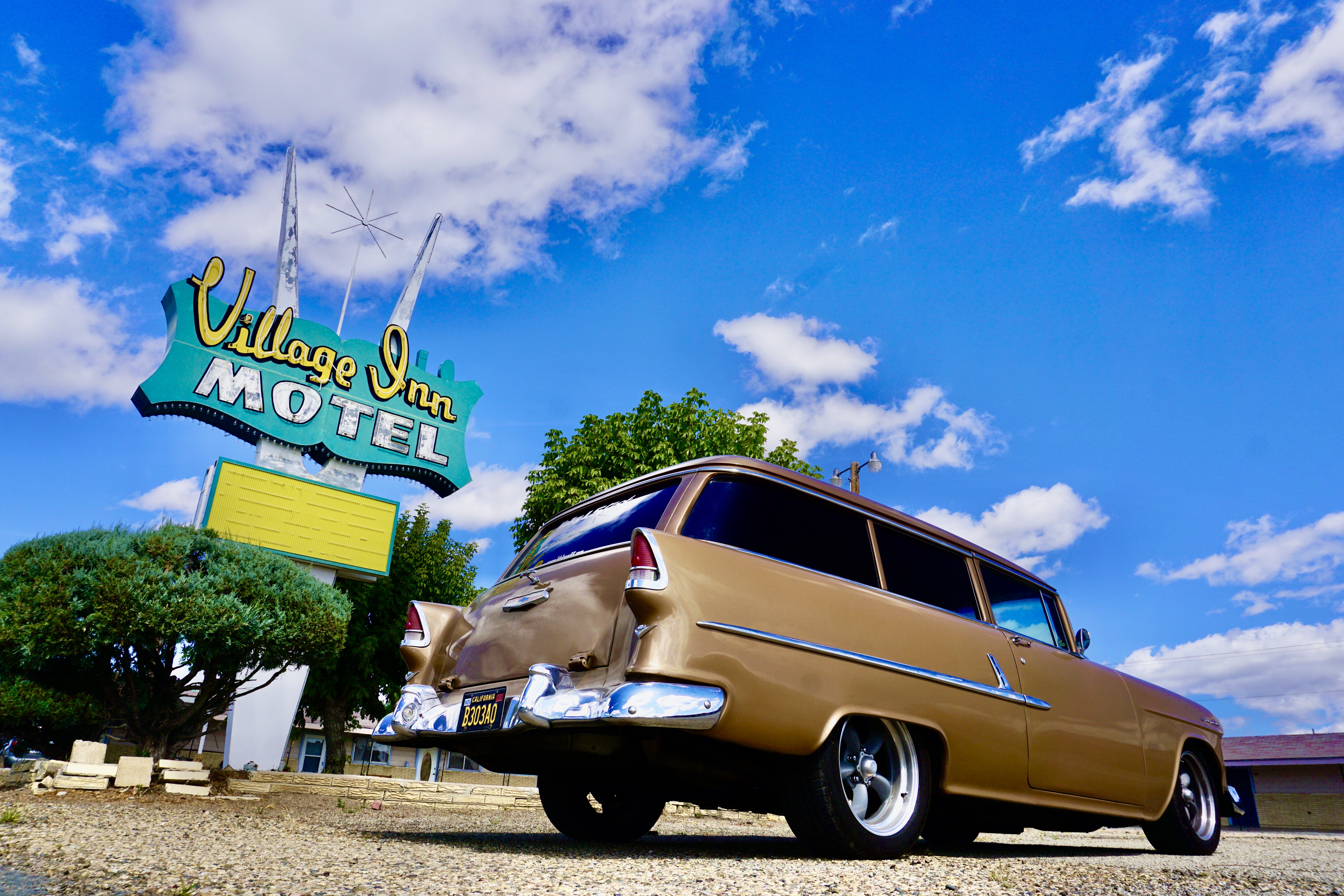 After Raton I hopped onto Highway 64 and headed south.
In Clayton, NM I stopped for another Post Office picture.

And finally I was in the Central Time Zone – time to change my watch.

Since I was going thru Amarillo anyways, I had to stop in and see Cadillac Ranch again. 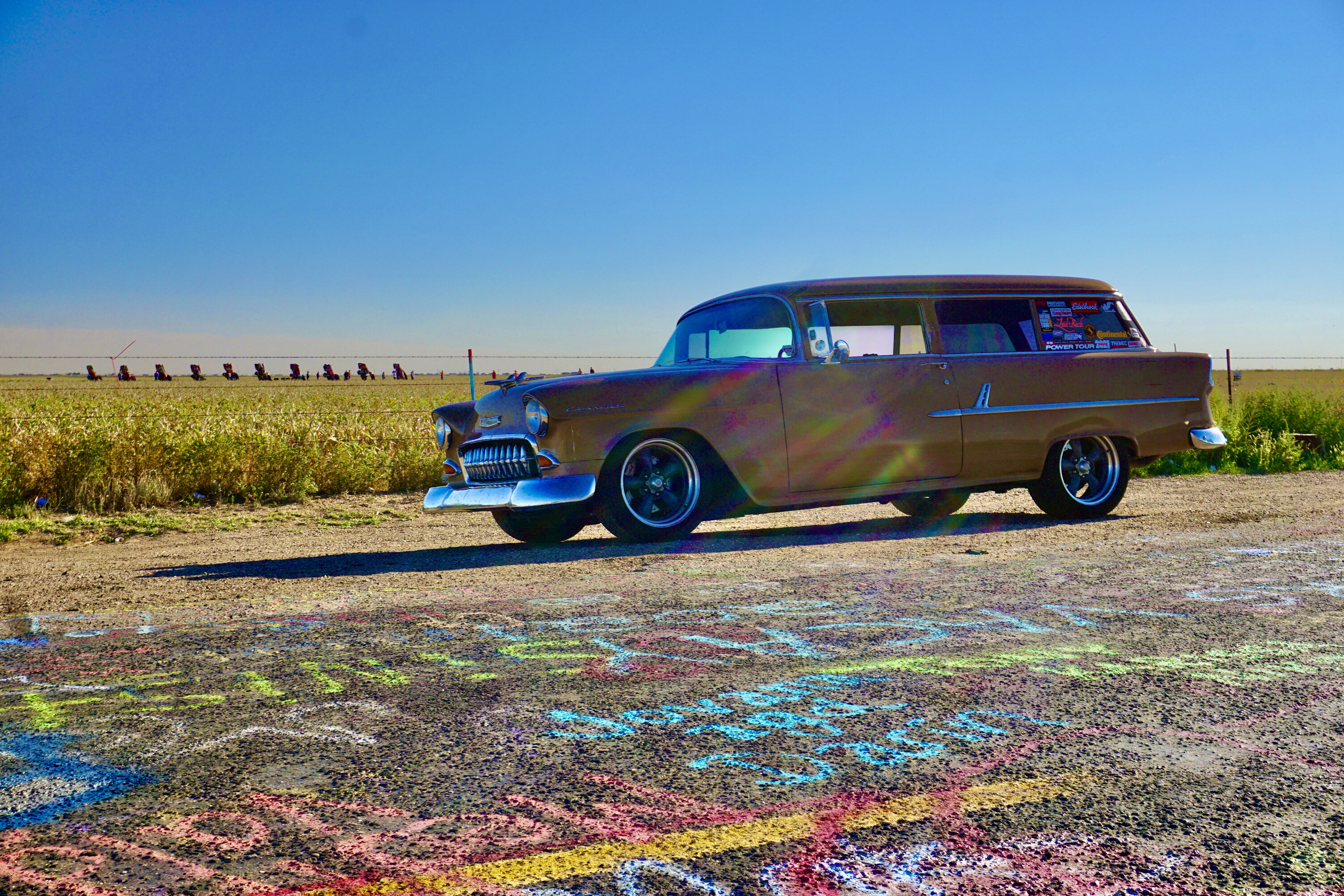 Whenever I’m in Amarillo I always stop in the Big Texan Steak House for a nice steak.
And – no – I did not try the 72oz. challenge.
A man has to know his limitations.
The next day we hit the road and boogied down I-40 from Amarillo to Alanreed.
We got off the interstate, onto old Route 66 and hit the “66 Super Service Station.”

Built in 1930 by Bradley Keiser in what was then downtown Alanreed, the Super Service Station is now maintained by the Texas Historic Route 66 Association.
The gas pumps still have a price of $1.19 a gallon, but no matter how hard I tried, I couldn’t get any gasoline out of them…
A few miles down the road is McLean – home to the first Phillips 66 gas station in the state of Texas.

It was built and leased to Phillips in 1929.
The prices on these gas pumps were completely faded from the Texas sunshine.
20 miles down I-40 in the town of Shamrock is the Tower Station / U-Drop Inn Cafe.
Built on Route 66 in 1936. 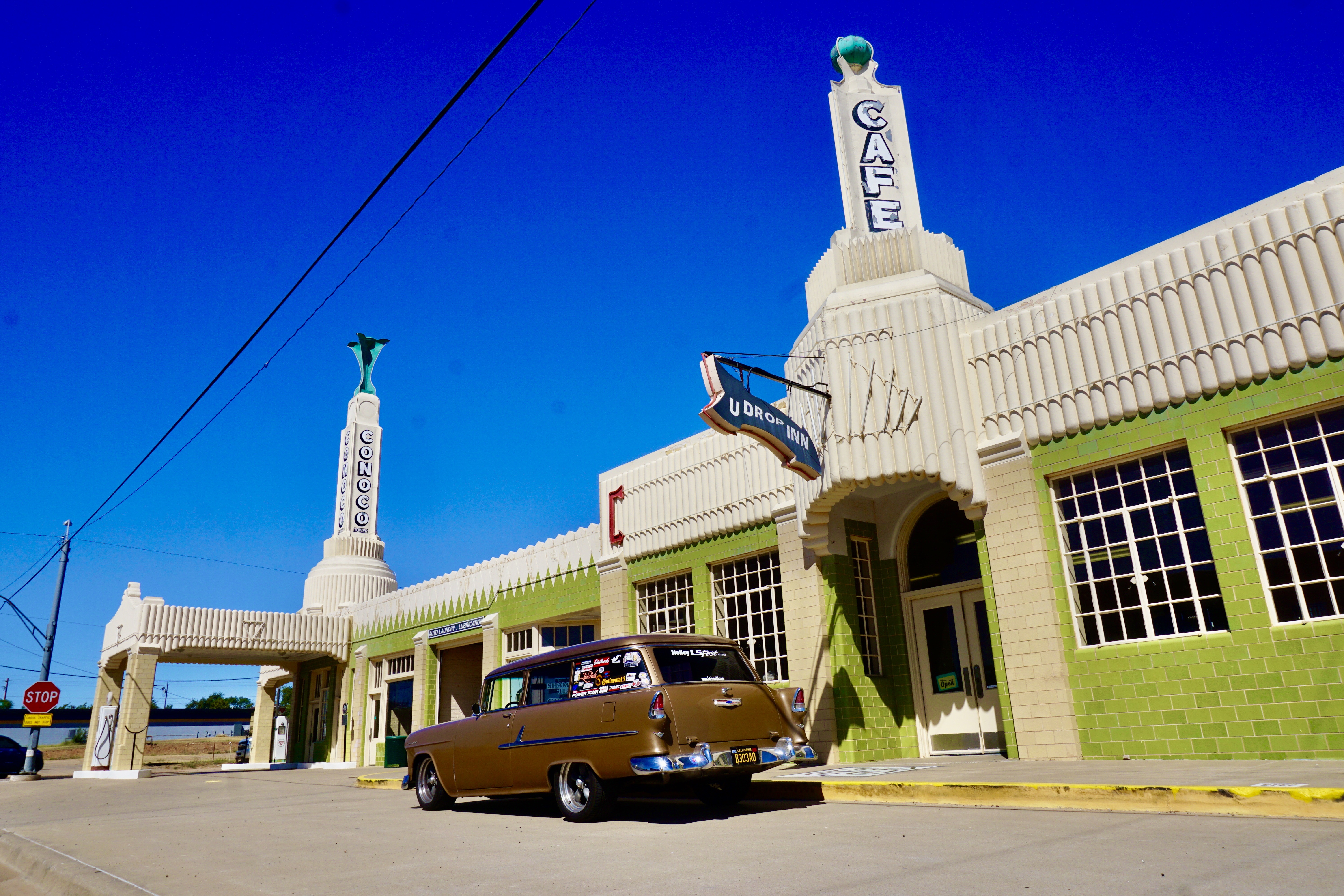 If it looks familiar to you it may be because Pixar copied it and used it as Ramone’s Automotive Body and Paint Shop in the animated movie “Cars.”
It now houses the Shamrock Chamber of Commerce and it’s well worth a stop.
I got back on the road and headed south on Texas Highway 83 towards Childress.
On my way I found this rest stop. 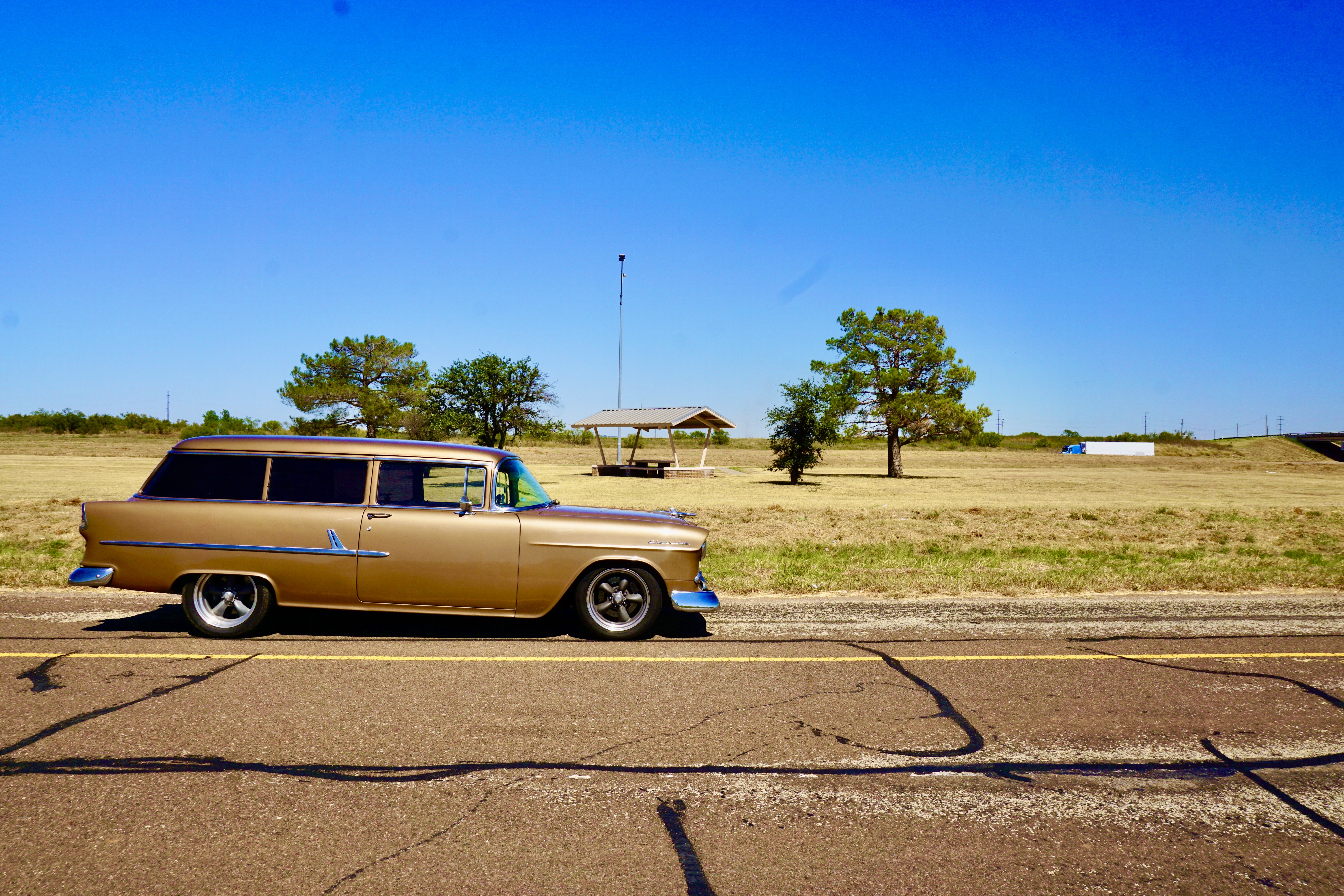 I’ve said it before, and I’ll say it again – I think Texas has the coolest rest stops in the United States.
I don’t know why, but they’re all very cool and easy on the eyes.
Whenever I see a rest stop in Texas – I always try to stop.
In Childress I got onto 287 and headed towards Wichita Falls.
I wanted to get the Catalina Motel sign the last time I was there, but my transmission distracted me.
This time I got it.

And the DDD Motel 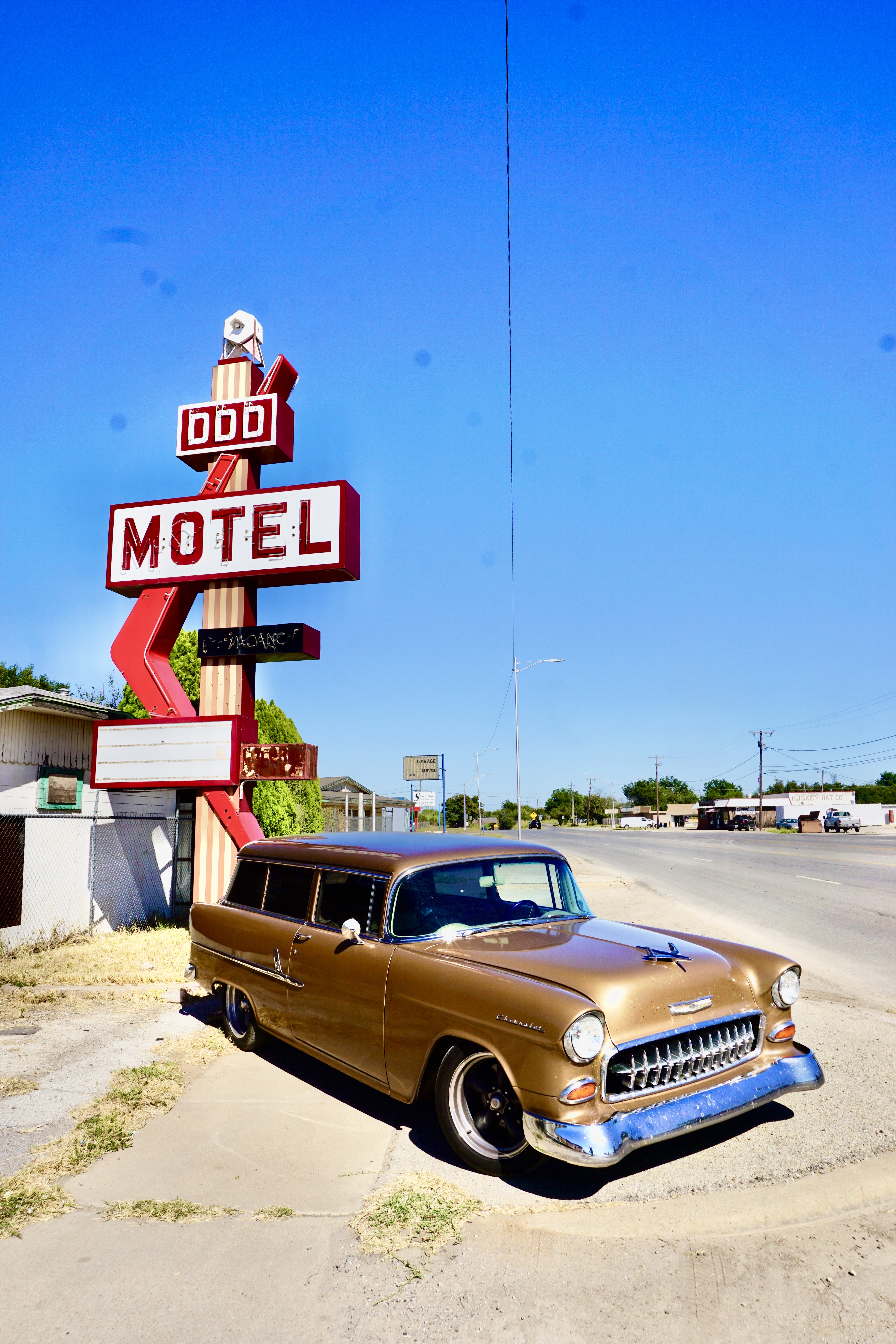 I should clean off my camera lens more often.
After that I headed over to meet my friends at Saunders Body & Paint Shop.
They’re the ones who took me in back in April and replaced my transmission when it refused to shift out of 2nd gear.
They were kind enough to keep my old transmission for me.
I picked up the old transmission and slid it into the back of The 55.
I was going to take my old trans on a little sight seeing road trip.
From Wichita Falls to DFW and the Texas Motor Speedway and then to the “Duel in Del Mar.”
After Del Mar I’ll drive it back to the shop that built it for me in LA so they can diagnose and rebuild it for me.
From Wichita Falls, the Texas Motor Speedway is just over 100 miles.
If you haven’t been to the Goodguys shows at the Texas Motor Speedway you should go.
The TMS is pretty awesome!!
And on Saturday, if you’re a registered participant you can get a ticket and drive your car on the track.
It’s super cool.
You can also get a ride in a “Cup Car.”
They’re NASCAR race-cars with de-tuned engines and they only get you up to 165mph in the 4-laps you get.
It’s definitely an E-Ticket ride!!
The Goodguys Texas show was awesome – it’s always fun seeing my car-family, and the cars too.
Now it’s time to hit the road to Del Mar.
But not before we check out some historic race cars and a National Park in my next installment.
Thanks for coming along for the ride.
I’m Jeff Thisted and I drive a 55.
#idrivea55