I just got back from SEMA 2015 a couple weeks ago.
If you don’t know what SEMA is, it’s the Specialty Equipment Market Association. Basically, it’s the biggest car show in the world…
And it’s closed to the general public.
That’s right, you’re not invited.
It’s only open to people within the industry.
And it’s truly unbelievable.
If you’re a car-guy – SEMA is definitely something you need to put on your bucket list.
I drove the 55 out to Vegas for SEMA this year.
We had just put in a new cooling system from Mattson’s and I wanted to see how it performed.
The last time I had driven the 55 like that was when I went back to Colorado for my nieces’ birthday back in late July.
It was hot in July.
100 plus degrees.
And the speed limit going thru Utah is 80mph.
Seriously.
80 miles per hour.
It was hot outside and I was driving fast.
I had the 55 moving between 80-90 mph.
But I kept a close eye on the engine temperature gauge – it never went over 210 degrees.
Yeah… 210!
It was running hot.
So hot that I didn’t feel comfortable turning on the AC.
Turning on the AC with the engine running 210 is only gonna make it hotter and potentially kill it.
And the last thing I wanna do is kill my engine in the middle of nowhere Utah.
So, after I got back from Colorado I did some cooling system research.
I had seen a few different radiator modules out there for tri-fives.
And they’re not inexpensive.
They’re purpose built integrated cooling systems that perform as good as they look.
I went to Mattson’s http://www.mattsonscustomradiator.com because they’re the best bang for the buck out there.
I talked to Jack Jr. and ordered a 55 cooling module.
That consists of a radiator core support, aluminum cross flow radiator, AC condenser, transmission cooler, overflow tank, two electric cooling fans, relays, wiring harness and all the hardware needed to get it installed.
He said it would be done in about two weeks.
It was a happy day when I got the call from Jack Jr. saying it was ready.
And it was less than two weeks.
Oh joy of joys!!
When I went to pick up my cooling module there was a candy apple red 57 sitting in the driveway.
The bullets on its nose and the flash panels on both sides were all hand engraved.
And it had a built LS7.
It also had a Mattson’s cooling module.
The guy who owned it said he’d never put anything else in any of his cars – which I think is high praise indeed.
After I got the cooling system, I took the 55 up to Da Rod Shop in Simi Valley where we would install it.
You may know Da Rod Shop and Steve & Mike from the hit TV show “Rods ‘N Wheels” on Discovery & Velocity –  http://www.discovery.com/tv-shows/rods-n-wheels/
Steve & Mike are the best.
Seriously.
Good guys who know and love cars.
We got the old radiator, AC condenser and core support out with no problem.
And the Mattson’s unit slid in like it was built for it.
Mike was impressed at how everything was included.
Button head screws, fan relays, everything.
It’s a killer set-up.
And we got it all installed in a day.
(With the exception of AC lines from the compressor to the condenser & recharging the AC system)
On my way home the 55 ran at 160 degrees!
Super cool.
It works! 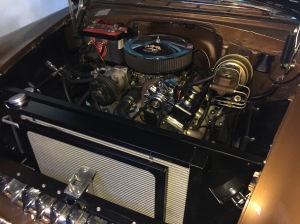 But…
The next day, as I was driving out of my garage, I noticed a trail of fluid following me.
I stopped and looked under the car and saw something dribbling out that looked like it was coming from the driver’s side motor mount…
Thank goodness I live a block away from a shop.
Mitch put it up on a rack and told me I’d just popped one of my freeze plugs. Seriously?!?
He said someone upstairs is looking out for you – at least it happened here and not on the way to Vegas.
With new freeze plugs installed I was ready for SEMA.
I left Monday morning and the 55 ran like a champ.
It never got over 160 degrees the whole way out there.
Granted, it wasn’t hot outside, but 160 is running pretty cool.
Wednesday morning I got up to go to the show and it was raining.
Perfect timing since I just had the original windshield replaced while we were putting in the new radiator.
The first time I drove the 55 in the rain, the windshield gasket leaked a little bit. It would drip right next to the sun-visor and down onto my leg.
Drove me nuts.
Thank goodness it doesn’t rain much in Southern California.
Now the windshield doesn’t leak and the engine’s running nice and cool.
I had seen the sights at SEMA and met most everyone I needed to meet with so I left my hotel on Thursday for the drive home.
Luckily I got caught up with some fast ‘n furious import sedans.
There was a Nissan and a Hyundai that were moving.
So I tagged along.
I made it from the Gold Coast to Santa Monica in less than 4 hours door to door.
The wagon is a boogie-machine.
During my drive back I got a text from a buddy of mine asking if it’s true that George Barris had passed away.
I didn’t know – I listen to Pandora.
And I didn’t respond – it’s just not safe.
Then I got another text from another friend asking the same thing.
And then another…
I guess it was true.
George Barris – the King of Customs – had passed away.
I was lucky enough to have known him a little bit.
The first time I met him was at SEMA of all places.
I was having breakfast with Billy-D from Rods ‘N Wheels, my buddy Quin: an Emmy nominated camera operator and Jessi Combs from Overhaulin’.
We were at the Las Vegas Hilton diner when George came in with his daughter and sat down in the booth behind us.
Billy said: “Guys. Check it out! George Barris!! The king of Kustoms!!! We’re having breakfast with royalty.”
We all turned around to see The King of Kustoms in all of his yellow satin glory.
He talked to us until his food came then we left him alone so he could eat.
He was a super nice guy.
I ended up working with George on Rods ‘N Wheels with Billy-D.
Our mutual friend Clarence had a car he needed to get done for a car show.
Clarence loves George Barris…
I mean, who doesn’t right?
Billy set it up so we’d surprise Clarence at Barris Kustom’s shop and let “The King of Kustoms” himself come up with the design of the car.
George was awesome.
He gave us free run of his entire shop.
He answered any stupid question we could come up with.
He obliged when I asked him to autograph on an old Hot Rod Magazine of mine.
He even let me sit in the Batmobile!
Yeah!
I sat in the Batmobile!! 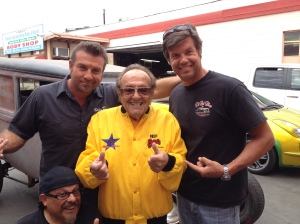 That’s Artie The Party, Billy-D, George Barris & me.
It just goes to show you he wasn’t just the King of Kustoms, he was a real down to earth guy.
George had an annual car show in Culver City for years, and he’d always make time to say hi and ask about how I was no matter how busy he was.
George Barris was a class act.
And he will be missed.

12 years ago today.
I think Texas has the coolest rest stops.
Check out the awesome birthday card my Pop @paulthisted made for me.