I just got back from spending the holidays with my family in Colorado.
I was stuck with them up in the mountains for two weeks.
It was awesome!
They’ve got a place up in Keystone – it’s a ski resort at just over 9200 ft in the Colorado Rockies.
My Pop and I arrived while everyone was out skiing.
After we unpacked, and I shoveled almost a foot of snow off of the driveway I was about to text my brother that we were there when an alert appeared at the top of my phone that one of my pictures had just got another like on Instagram.
Very exciting.
Naturally I stopped texting Scott and hit the alert to see who like my picture and which picture it was.
When Instagram popped up I learned it was one of my Camaro pictures, promptly forgot about texting my brother and started scrolling around.
You know I’m a car-guy.
So I follow the NAIAS Instagram account.
If ya don’t know what that is, it’s the North American International Auto Show and it’s held in Detroit, Michigan every January.
And, just to be clear, the NAIAS is the Super Bowl of auto shows – it’s in Detroit – the Motor City.
They had posted that a museum was going to drive three vintage cars from Seattle, WA to Detroit for the NAIAS and call it “The Drive Home.”
The cars are making the drive back to where they were born – Detroit – from Seattle, WA – sounded pretty cool.
I clicked on the link and it brought me to Lemayacm – LeMay – America’s Car Museum – Celebrating America’s love affair with the automobile.
I tapped on their post with a map of the United States and it read:
“Is The #DriveHome rally cruising near you? Three #VintageVehicles left #LeMayACM in #Tacoma, WA this morning to travel across 9 states to @NAIASDetroit, where the cars will drive down historic Woodward Avenue to the #NAIAS. Join us at one of the enthusiast rallies along the way! Find out more at americascarmuseum.org/TheDriveHome #ACMDriveHome”
I went back to their header, tapped the link to their website and learned that they’d be cruising right by me on the New Years Eve.
I sent them an email saying there was no way I could meet them in Grand Junction, but I’d love to meet them on their way thru Silverthorne if it was at all possible.
I got a response the next day from Max Muncey, the PR guy for the NAIAS introducing me to David and Ashley from America’s Car Museum.
Ashley then emailed me saying they’d keep me posted as to when they thought they’d be coming thru Silverthorne.
We coordinated to meet for lunch at the Mountain Lyon Café – a cool little dive in Silverthorne that’s about ½ a mile off of I-70.
It’s always better to go for a local joint that to go with a chain I think.
My family had planned to go to the Frisco Adventure Park to go tubing right when I was at lunch, so I asked my sister-in-law which car I should use.
To my delight she said it’d be better if I took my brothers car.
My brother’s car is an Audi RS7.
It’s got a twin-turbo V8 with 560hp, all-wheel-drive and snow tires…
It doesn’t really accelerate, it thrusts you forward – the thing is a beast.
I left to go to the Mountain Lyon Café a little early so I could stop by Targets’ snow covered parking lot and practice my drifting.
The RS7 is a beast and super fun in the snow.
Driving from the Target to the Café I noticed a Chevrolet dealership right next door.
Since I was a little early I thought I’d stop in and see if they had and Generation Six Camaros on the lot.
No such luck on a new Camaro but to my surprise they did have a Corvette ZO6 convertible on the showroom floor – white with a black top and wings – it looked like a storm trooper.
Sweeeeeeeeet. As I was leaving the dealership, getting ready to cross 4th street I saw a flash of red – it was the Mustang.
Oh yeah…
I completely forgot to tell you what kind of cars they were driving.
All three cars were red, they were a 1957 Chevy Nomad, a 1961 Chrysler 300g and a 1966 Ford Mustang.
David Madeira, ACM’s CEO was in the red Mustang.
As he turned onto 4th Street and into the Mountain Lyon Café he was followed by the 300g and then the Nomad.
It was pretty cool seeing them all pull in and park next to each other in formation, kind of like the Air Force Thunderbirds.
And then to see the tailfins of the Nomad and the 300g next to each other was a thing of beauty.

But what I liked the most was that they were filthy.
Not just dirty…
They were filthy from driving thru the melting snow run-off and road-grime.
They didn’t look like museum cars usually look.
And I loved it!
I immediately went up to check out the Nomad.
It’s a red 57 with a 327 and a Muncie M-20 4-speed.
Sweet.
The Chrysler 300g was also red, but it had a 413 with a long-horn cross-ram intake manifold and a Chrysler’s 3-speed TorqueFlite automatic transmission.
Super sweet. 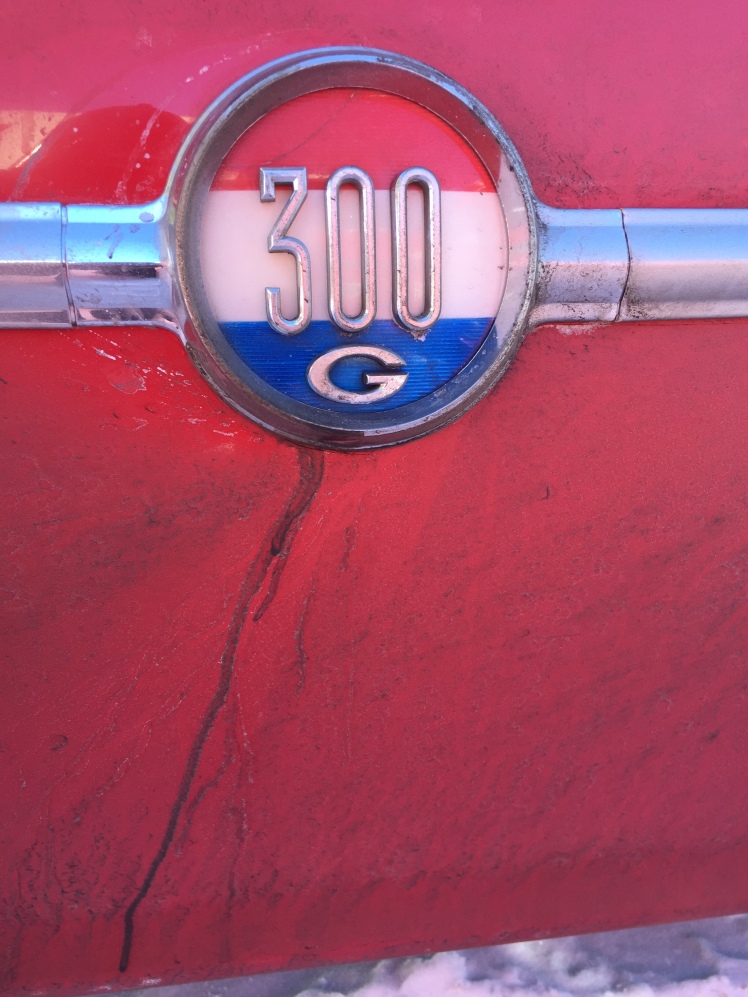 Then the 1966 Ford Mustang that Dave, the CEO was driving.
The little red mustang was sporting a 289 & 3-speed automatic.
An All-American classic.
I asked Dave how it ran over Vail Pass and he told me it’s happiest over 70.

After a great lunch at the Mountain Lyon Café we went over to Summit Ford – the local Ford dealership and the highest Ford Dealership in the US.
The President of the dealership had heard about The Drive Home thru Instagram just like me.
He reached out to the ACM and there he was having lunch with us and taking pictures of the cars in front of Summit Ford.
Shell is one of the sponsors of The Drive Home, so after fueling up the cars they were about to be on their way.
I had mentioned Loveland Pass to them over lunch, but at the Shell station two locals in a diesel pick-up came over to take a look at the cars.
When we told them we were headed over Loveland Pass they said there’s no way we’d make it in those carbureted cars.
After the locals left Dave asked me if I’d escort them up Loveland Pass.
I told him no problem.
I’d driven the 55 over The Pass just last summer.
It would be an honor.
As we were turning onto Highway 6 from the Shell station I called my brother from the Bluetooth equipped RS7 and told him that his Audi was escorting The Drive Home up to the top of Loveland Pass – the Continental Divide.
The view from the rear view mirror was almost as spectacular as the view out of the windshield.
I had the Mustang, the 300g and the Nomad behind me.
Three little red dots in the black RS7’s rear view mirror.
It was like a little parade of cool cars.
We made our way past Dillon, Keystone and then Arapahoe Basin.
And we stayed single file all the way up the summit.
As we crested the Continental Divide we all pulled off to the small parking lot on the right.

I got out and asked the guys how the cars were running.
When I looked at their gauges they were all just above the C on the thermostat gauge.
Except for the Nomad – It was running a right in the middle.
After checking in on the cars Ashley Bice, LeMays Marketing & Communications Manager, asked I’d take a picture with Dave over at the Loveland Pass sign.
Giddy-Up!

After the picture I got to talking to Dave.
He’d been all over the world riding his motorcycle with his wife.
He showed me a picture of them in Kashmir at the highest pass in the world.
It really put me off that he’s a retired lawyer because he’s a super nice guy.
He asked me if I smoked cigars and before I could say heck yeah he pulled out two massive Montecristos and handed me one.
Upon further inspection the massive Monte had an America’s Car Museum band around it too.
Very nice.
He asked me if I’d like him to cut it, but I didn’t dare smoke that thing in the RS7.
My brother would kill me.
I politely declined the cutting but graciously accepted The Monte.
He said: “Make sure to find me in Detroit. I’ve got plenty of cigars.”
Done and done.
After Dave lit his cigar he rallied the troops and they were off.
The Red Mustang led 300g and Nomad down to Lakewood, Colorado for a New Year’s Eve party.
The cars all looked so right wearing their dirt and road grime like a badge of honor.
As they went down towards I-70 I went back down towards Keystone.
Just as I was about to pull back onto Highway 6 a little Honda CRV zipped over the pass and pulled in front of me.
Doh!
But, I’m in the mighty RS7.
…With all-wheel drive and snow tires.
I wait for a gap.
And I’m amazed at how with a little dip into the throttle the Audi just surges forward effortlessly.
It’s almost like a video game.
Wait till the coast is clear, dab the throttle and you hear a little “Brrrrrrrrr” behind you accompanied by the seat pressing you forward like Xcelerator at Knott’s Berry Farm.
The thing is a beast.
When I get back to the family I find everyone out back around the fire pit standing next to a fire.
After telling my story I realize I’ve still got The Montecristo Dave gave me at the top of the pass.
After my Sister-in-laws approval I lit the cigar and texted Dave what a pleasure it was meeting the whole gang.
I spent the next hour smoking the cigar out by the fire pit.
It ended up being just me and my niece by the time I had finished The Montecristo.
It’s pretty amazing to me that I can be up in the mountains, in the middle of nowhere, and thru the power of social media I can hook up with some super nice car-guys.
I’m looking forward to seeing Dave, Ashley, Steve, the Nomad, 300g and the Mustang in Detroit.
Dave, Ashley and Steve probably need showers after that long trip.
As for the cars…
I just hope they haven’t washed em.
Leave em dirty!!

7 thoughts on “The Drive Home”

I had a blast at the @goodguysrodandcustom Heartland Nationals and @goodguysax
Come along for the ride in The 55 as we literally drive on history.
@mammothcavenps is National Park #30 for us!!