A few weeks ago I had the opportunity to go to The Petersen Automotive Museum to watch a documentary on Bruce McLaren.
But before I saw the movie, I had to check out The Petersen again.
I hadn’t been since their grand re-opening almost two years ago and after having Bruce Meyer himself tell me I need to go and see their new exhibit “Seeing Red: 70 years of Ferrari,” I had to see it for myself.
Before I could even get thru the parking garage, I see a stunning 1958 Ferrari 250 GT Berlinetta “Tour de France” thru the window into the lobby. 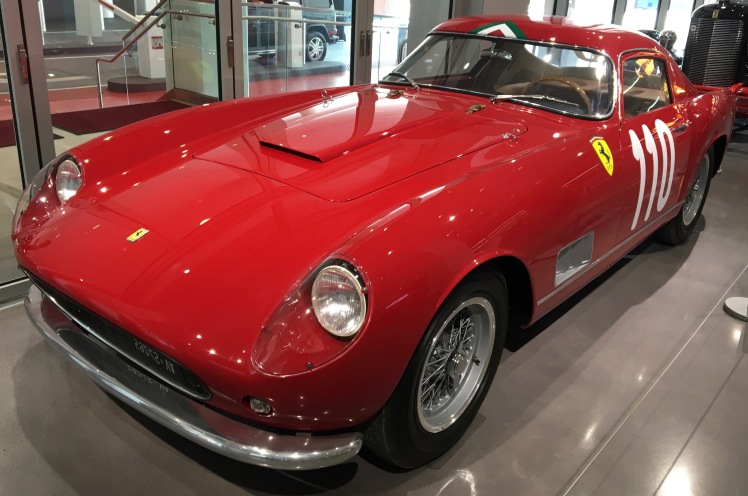 Welcome to The Petersen.
Behind the Ferrari is a 1929 Du Pont Model G Speedster.
One of only three boat-tail speedsters known to exist. 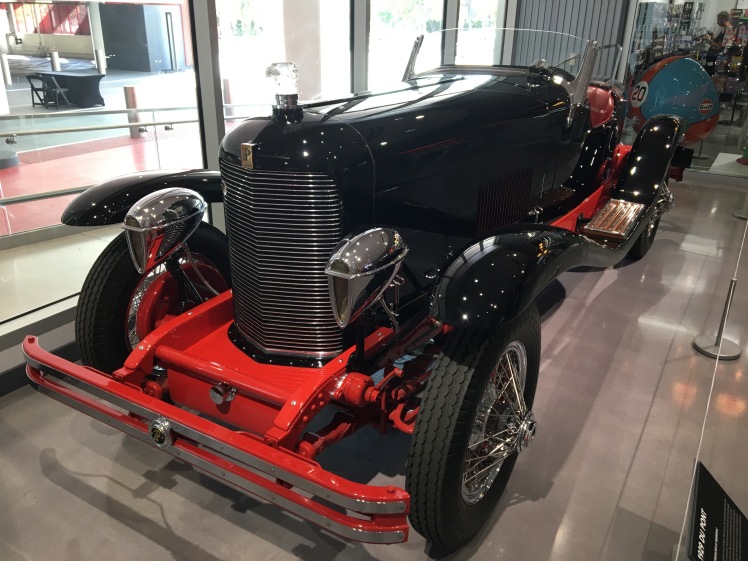 The last time I saw it, it was sitting in dirt, all covered in dust, in the middle of a baseball field at the Culver City Car Show a couple of months ago.
They drove it there along with their 1948 Tucker Torpedo (which is hidden down in The Vault) and a 1913 Mercer Type 35-J Runabout.
It warms my heart that they actually drive these things.
When I enter the lobby, I’m greeted by a pair of bright red GTO’s front and center.
The first a 1985 288 GTO – Ferrari’s first real supercar. 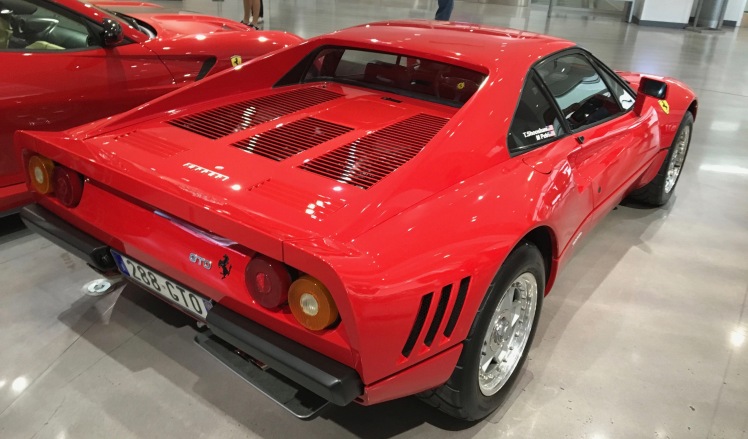 It was a purpose built racecar that was street legal.
It looks very similar to the entry-level 308, and there-in lies its beauty…
Underneath the 288’s aluminum body is a purpose-built twin-turbo charged V8.
This was long before twin-turbos were the norm.
For a Ferrari, it’s a sleeper.
Next to it a 2010 Ferrari 599 GTO. 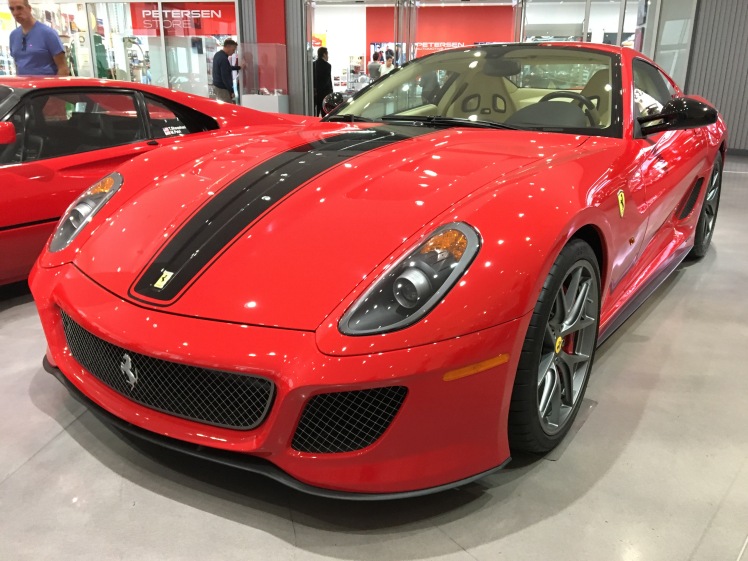 A modern front-engine 12-cylinder Grand Touring machine.
And, sitting just off to the side of the GTO’s is The Petersen’s bright orange McLaren M8F.
I love the velocity stacks coming outta that small-block chevy out back. 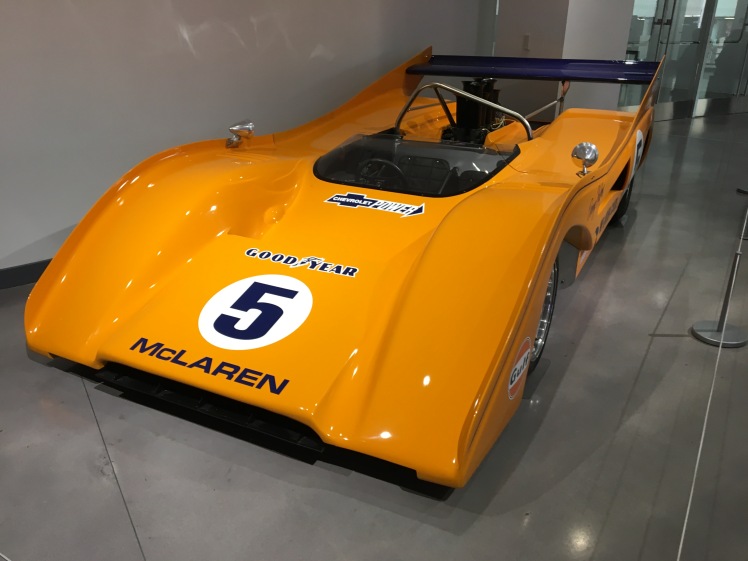 After I checked in they suggested to start up to the third floor.
Up on the third floor they’ve got a bunch of “Hollywood” cars – cars that have been in movies and TV shows.
Like the Lincoln from Entourage and a few others I didn’t really pay attention to.
My favorite was the Batcycle! 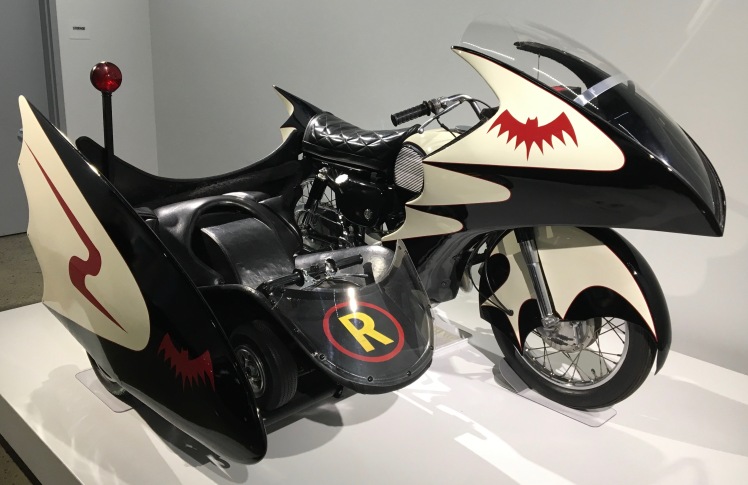 Now I just need to find Batgirl…
After giving the 3rd floor a quick once over I made my way down to the 2nd floor where I was greeted by a couple of super-sick clear-coated carbon fiber McLarens.
They looked sinister in their exposed carbon fiber.
The first was a 2016 McLaren MSO HS The MHO HS (McLaren Special Operations-High Sport) is a limited production supercar built to the specifications of each owner, ensuring that no two cars are exactly alike. 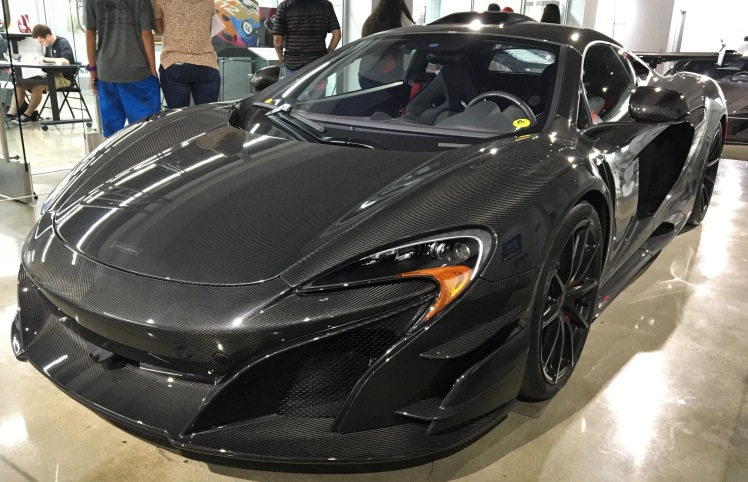 It’s powered by a 3.8 liter twin-turbocharged V-8 engine with 678hp.
The HS has more weight-reducing materials like polycarbonate for the engine cover and carbon fiber for the body and other components.
And right behind it a 2015 McLaren P1 – their first hypercar.
Seriously… I just love the clear-coated carbon-fiber. 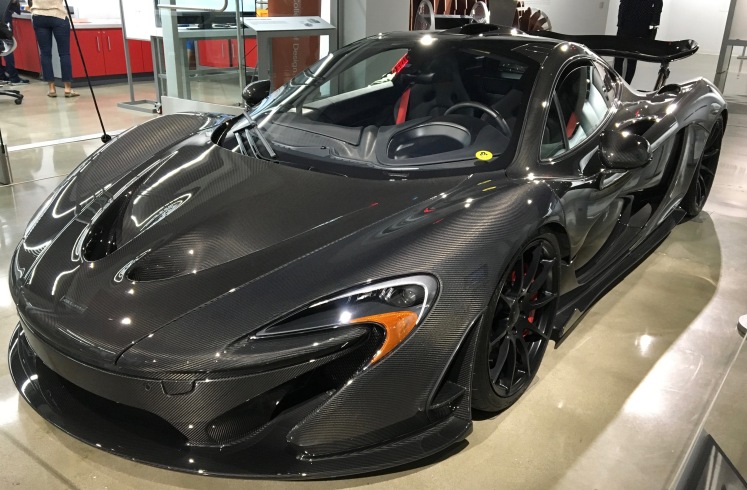 Across from the ultra-exotic McLaren are some tributes to The Petersen legacy.
Hot Rod Magazine jackets from Robert & Margie Petersen’s personal collection.
I love that history. 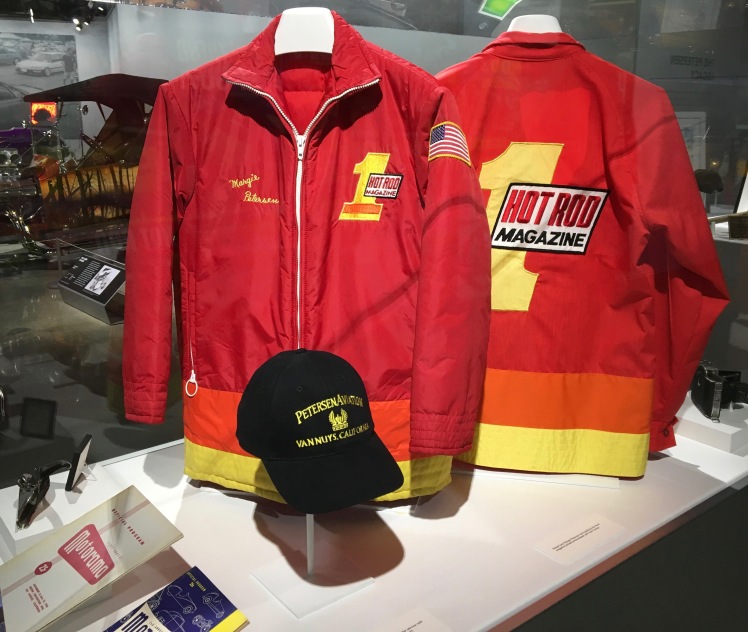 Then a gaggle of America’s Most Beautiful Roadster (AMBR) winners.
The 1969 winner “Alien.” 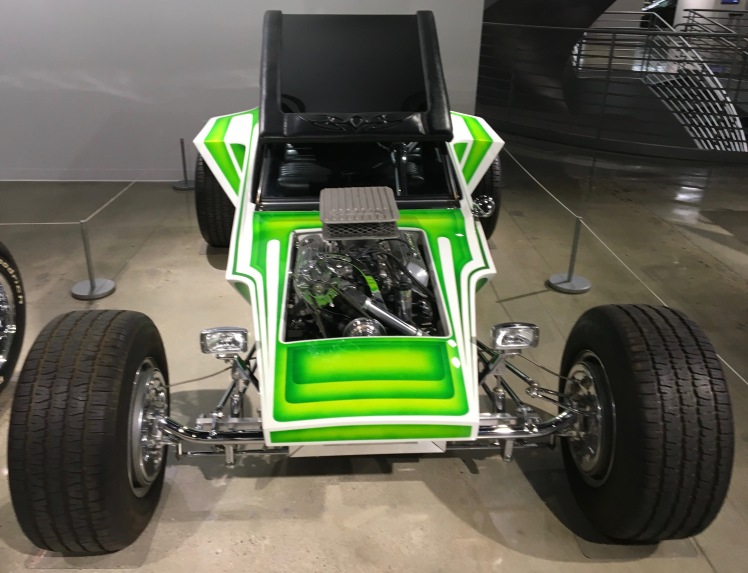 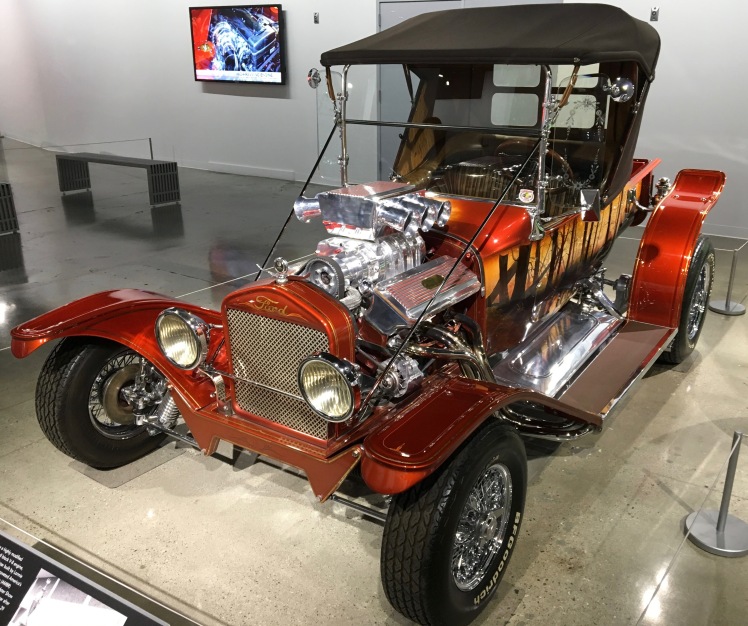 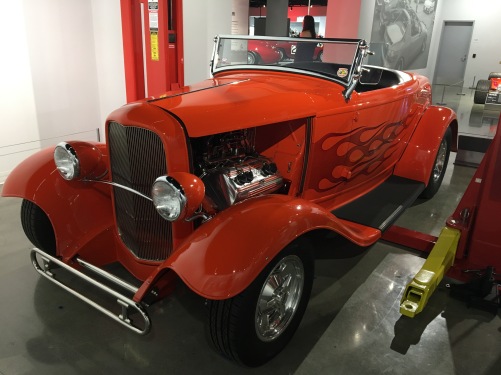 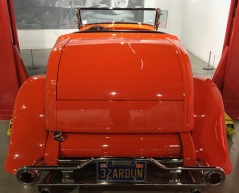 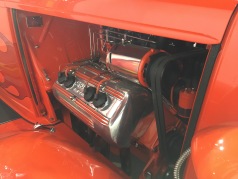 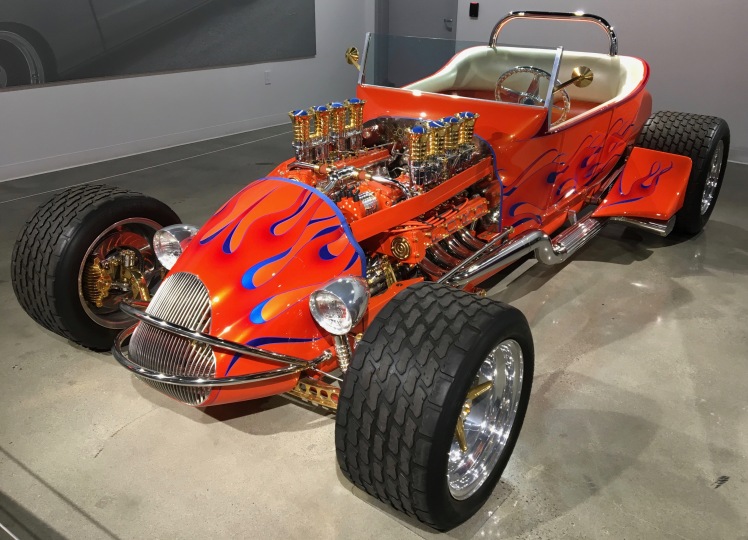 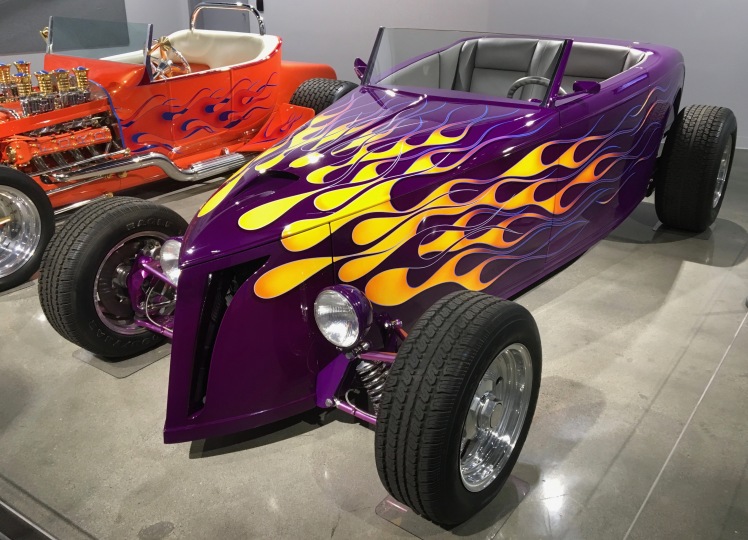 That’s a whole lotta AMBR winners!
Now it was time to start “Seeing Red.”
As I walked into the exhibit there it sat…
It was out of its key-light because some of the Ferraris had been moved around to accommodate folding chairs for the screening of the McLaren documentary we were gonna see later that night.
Light – smight!
There it was…
One of my favorite cars of all time:  The 1961 Ferrari 250 GT California Spyder SWB. 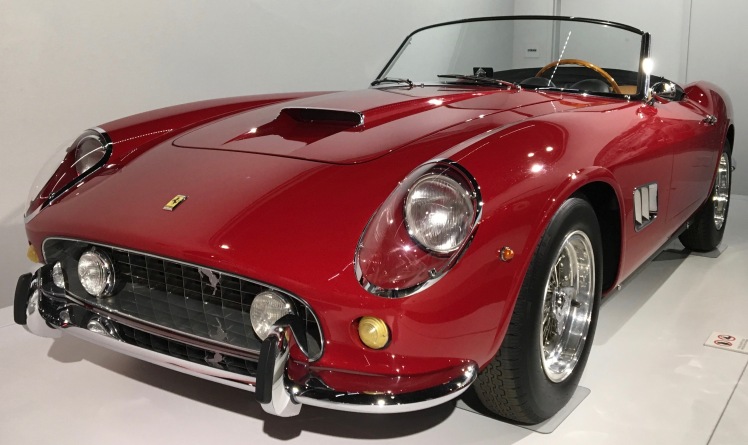 And I think the California is one of the most beautiful cars ever made.
A front engine, 12 cylinder, open top Ferrari…
A timeless classic.
Next to it sat a gorgeous 1958 Ferrari 250 TR Spyder with pontoon fenders.
This one’s a real Ferrari factory team car. 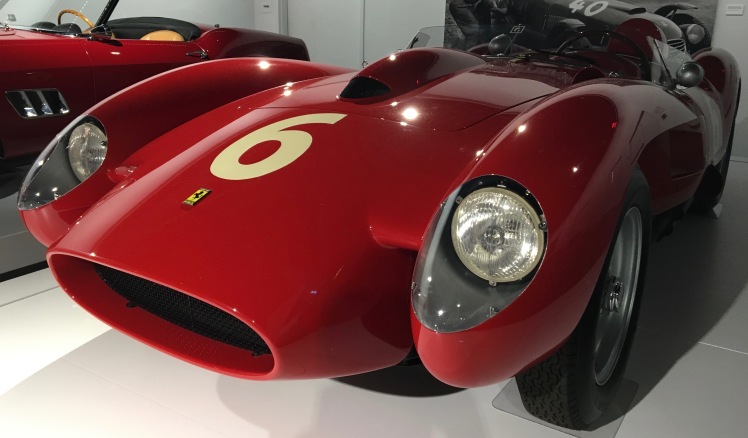 The TR stands for “Testa Rossa,” Italian for “red head.”
Not red for the color of the car, but for the red valve covers on the engine.
It is a thing of beauty.
Then the last Ferrari to win the 24 Hours of LeMans: the 1965 Ferrari 250 LM No. 21. 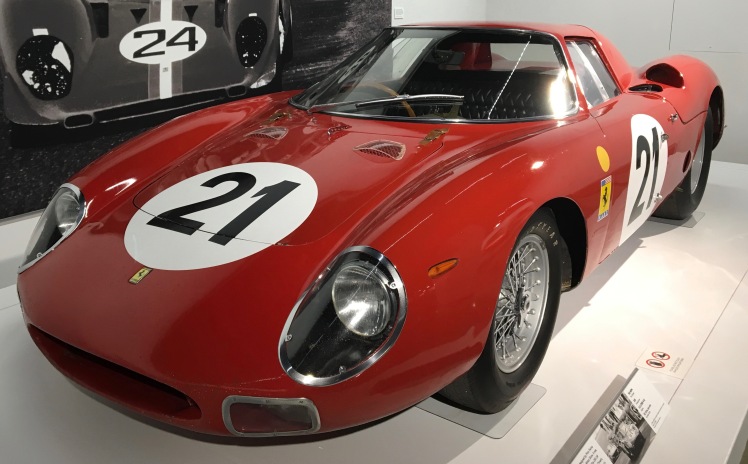 If you look closely you can see it’s still wearing its battle-scars proudly.
On the other side of the last Ferrari to win the 24 Hours of LeMans outright is the car that won the 2006 French Grand Prix: Michael Schumacher’s 2006 Ferrari 248. 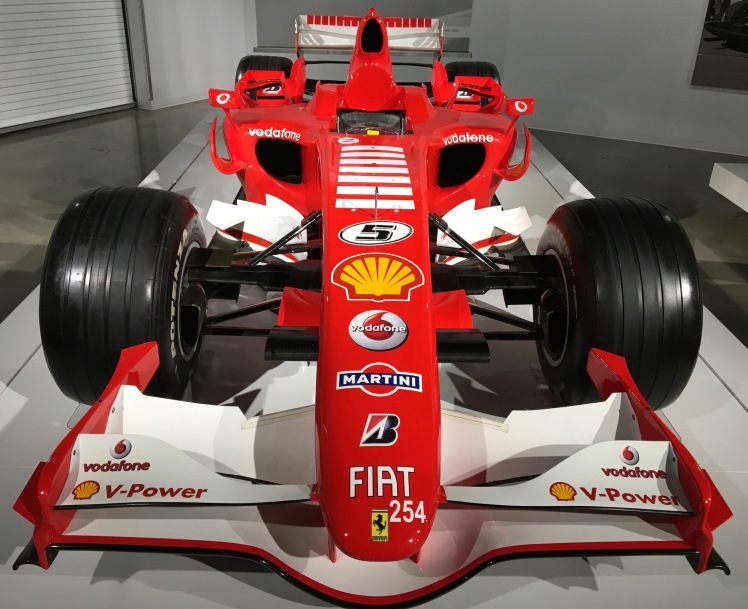 That’s real wings and slicks baby.
Hidden in plain sight, but out of its key-light for the documentary is another one of my favorite cars ever…
A 1963 Ferrari 250 GTO. 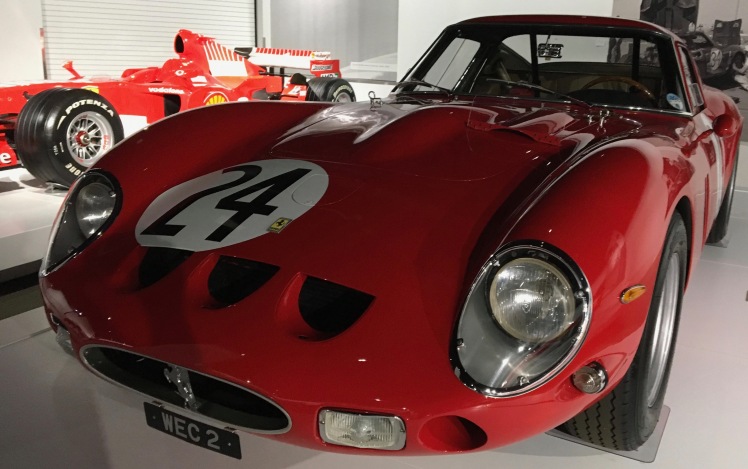 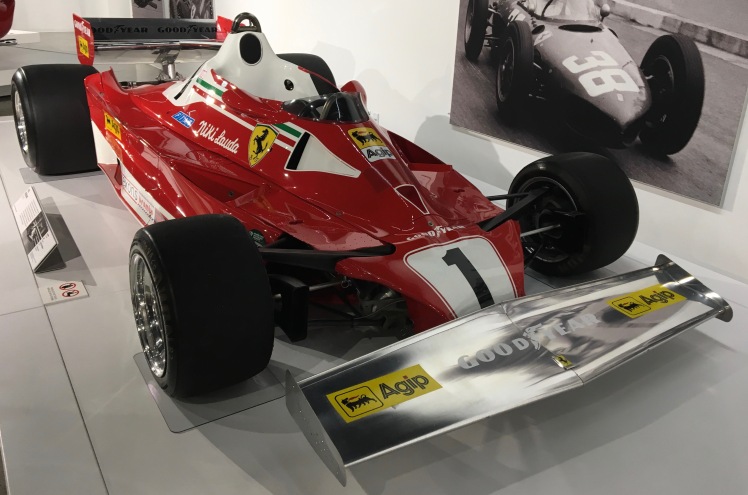 This car won both the Belgian and the Monaco Grand Prix in 1976.
In front of the 312 T2 sits the LaFerrari, Ferrari’s latest hypercar. 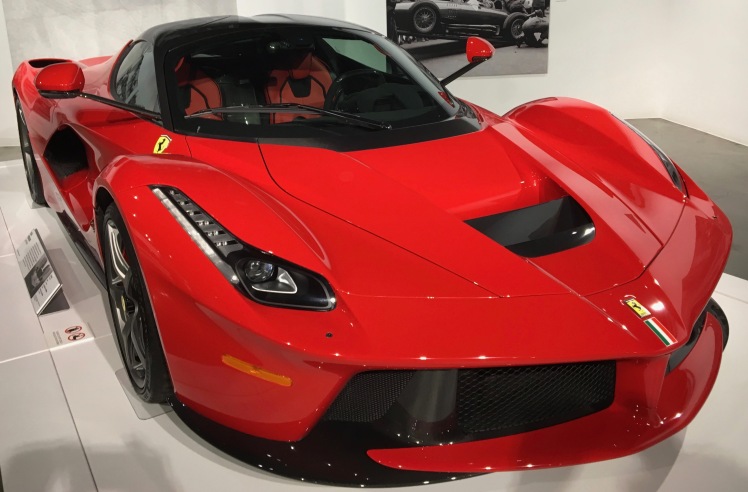 Like the McLaren P1 the Ferrari LaFerrari is a hybrid.
From the latest, state-of-the-art technology, we go back to 1947 and the Ferrari 125 S. 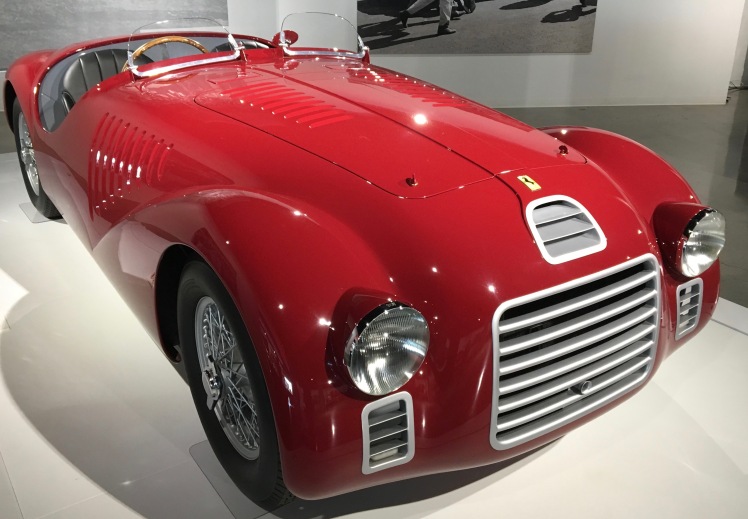 The first car to bear the Ferrari name and the first car to equipped with the now legendary V-12 engine.
Then the car that won the 24 Hours of LeMans in 1949.
The 1949 Ferrari 166 MM Barchetta.
The 166 MM has an overhead cam V-12 but weighed a lot less thanks to its superleggera (“superlight”) body. 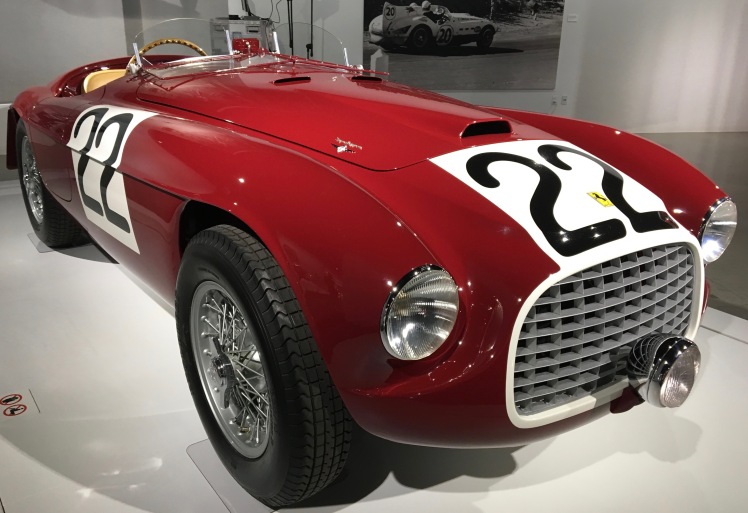 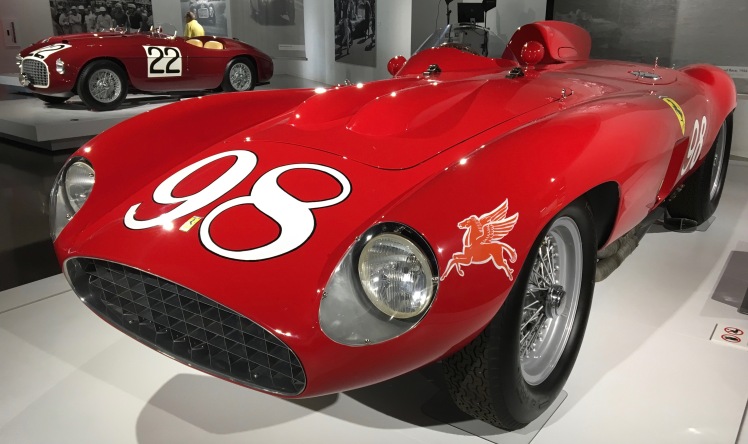 One of the reasons I love Ferrari, is he was all about racing.
He thought selling cars to the general public was a necessary evil in order to support his racing program.
When Ford wanted to buy the company in the 60’s he pulled out because he wanted complete control over the racing program.
Gotta love that passion.
And I do love me some Ferraris.
They are rolling works of art that just happen to be purpose-built to go fast and win races.
If you like cars, then get yourself down to The Petersen and check ’em out.
You can thank me later.