The past few months have been event filled.
And that’s a good thing because I’ve been driving the heck outta The 55.
Last year I drove The 55 to SEMA in October, then the Prestone 90th Anniversary Rally from LA to Scottsdale, AZ and back to the LA Auto Show in November.
After the Prestone Rally, The 55 was in “The Garage Powered by Prestone” at the Los Angeles Auto Show which was pretty cool.
After I picked it up from sitting at the LA Auto Show I noticed a little crack in the windshield.
You can just barely see it just to the left of the rear view mirror.

You play you pay, so I got the windshield repaired by my buddy Keith at Above All Glass – he’s the best!
Then in January I drove The 55 to the Roadkill Ziptie Drags in Tucson.

After I got back from the Ziptie Drags, I was on my way to the Venice skate park when my driver’s side leaf-spring snapped going over a set of railroad tracks.

When I first got The 55, I thought I was upgrading by purchasing new leaf springs from Danchuk to replace the original springs.
But I recently learned that the original springs, that lasted for almost 60 years, could’ve been re-arched.
Doh!
Danchuk wouldn’t replace the spring even though their phone representative said that no one there had ever heard of a leaf spring going bad like that.
Needless to say, I’m very disappointed in Danchuk’s customer service so I went to Classic Industries who said they’d stand by their warranty if their leaf springs ever failed.
Thank goodness because the next day I was shooting an install video at K&N’s headquarters out in Riverside – about an hour away. 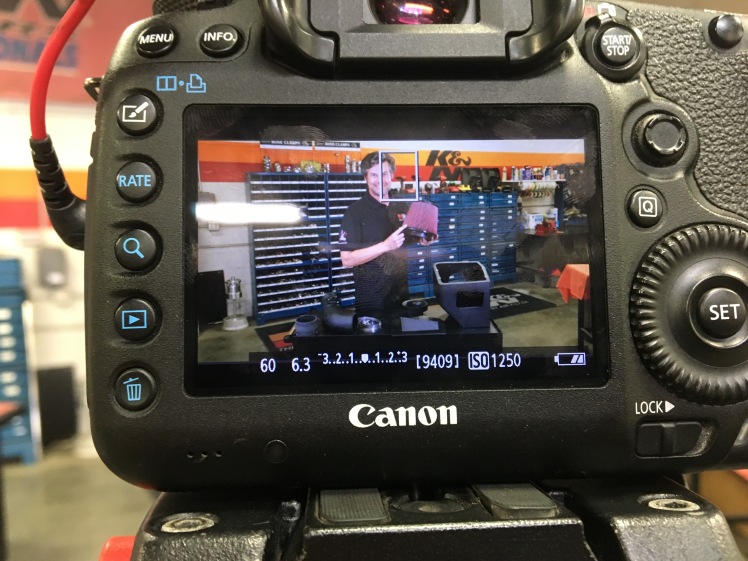 With the new rear leaf springs in The 55 handled better than new.
The following week, after months of emails, I was scheduled to go to Peter Mullin’s private collection in West LA.
It’s hidden in plain sight in a little warehouse that used to be a Saudi Sheik’s private club.
And he’s got everything from unrestored brass era cars to over-restored concourse winners!
One of my favorites was the 1939 Delahaye Type 135 Cabriolet – or simply “The Red Car.”

After viewing Mullin’s private collection my buddy and I went to revolving sushi.
Oh yeah, my buddy just happens to be Baja 1000 winner ACP who showed up in his sweet little 930. 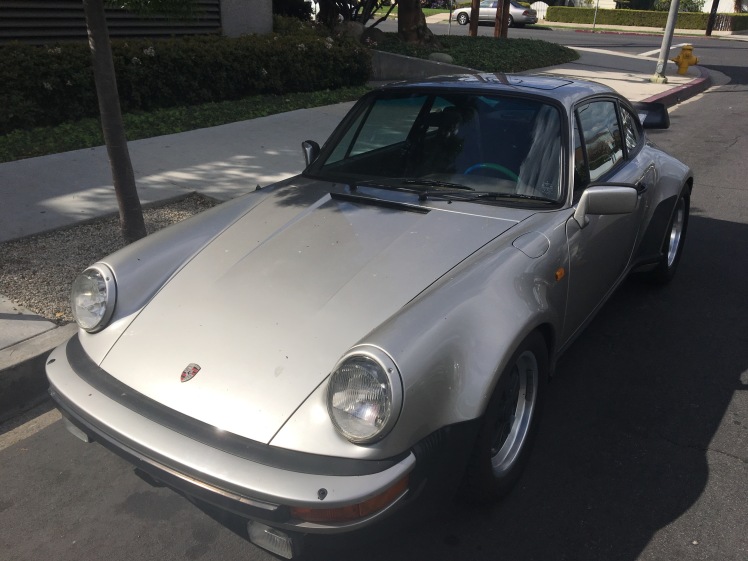 And speaking of Porsche, the next day I was scheduled to go to The Petersen Automotive Museum to shoot a special for The History Channel about Hot Rods & Muscle Cars.
The Petersen’s latest exhibit is The Porsche Effect.
After the Prestone Rally last year, at the LA Auto Show, I met the guy who was driving Elvis Pressley’s yellow Pantera with bullet holes in it from The King himself.
The guy’s name is Dana and he’s the curator of The Petersen Museum.
And he was foolish enough to give me his card.
…So I called him.
I arrived at The Petersen and after two laps of the parking garage I discovered that there were no more parking spaces available.
The security guard saw I was having trouble and told me to follow him.
One of the nice things about driving an old car is the occasional preferential parking treatment – parking in a No Parking Zone.

The security guard gave up his spot so I could park The 55.
What a nice guy!!
Then he escorted me to the front door where I saw a familiar face.
The little 1967 Porsche 910 that won its class at the 1969 LeMans.
The last time I saw it was in Bruce Meyer’s garage.

One of the things I admire about Bruce Meyer is that he drives his cars.
He drove this car and his LeMans winning 1979 935 K3 thru the streets of Los Angeles to The Petersen to drop them off for the exhibit.

Can you imaging the sound these beasts made cackling thru the city streets of Los Angeles?!?
Off to my right are not one, but two Porsche GT1’s!

So cool!!!
Remember – I was still in the front lobby.
I hadn’t even made it to the front desk to yet.
When I got there Dana was waiting for me.
He stickered me up and ushered me down into The Vault.
When I took the tour last year, the big rule they tell you before you enter is “No Pictures Allowed.”
Well, apparently that doesn’t apply when you’re with the curator of the museum.

He knew I wanted to see their Scagletti Corvette.
It’s one of three.
And I think it’s one of the sexiest cars ever.
Three guys are responsible for it:  Jim Hall, Gary Laughlin and Carol Shelby.
Back in 1959 these guys called GM, worked their magic, and had GM send three bare 1959 Corvettes chassis without the fiberglass bodywork, to Scagletti over in Italy.
Scagletti is an Italian design firm famous for designing Ferraris.
They hand hammered the bodies out of sheets of aluminum which shaved over 400lbs from the weight of the car.
And they were powered by Chevy 283 V8 engines with either two 4-barrel carburetors or Rochester fuel injection. 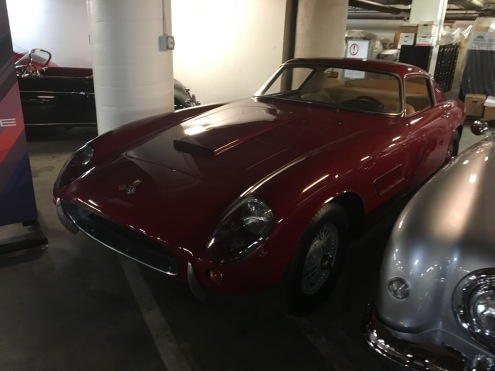 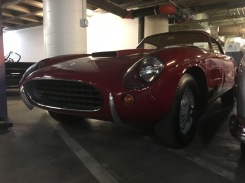 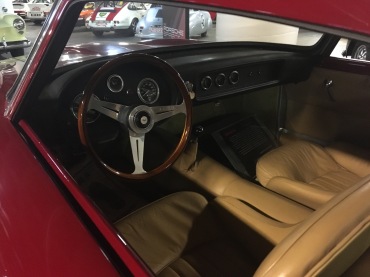 The interior is a cool blend of Stewart Warner gauges in a black crinkle dash, a Nardi steering wheel and beautiful tan leather.
Before we had to go he showed me their “secret stash” of Porsches they had down there that were overflow from their exhibit The Porsche Effect.
Sweeeeeeet.
Then I had to go to my History Channel interview.
By the time they were ready to interview me I was all wired up like a spider monkey on Mountain Dew.

I’m looking forward to seeing how it comes out.
The following weekend I drove The 55 to Tucson for the $3k Hooptie Challenge.
It’s a show shot for Facebook Watch and it’s hosted by David Freiburger and Brian Lohnes.
We had a blast and shot six episodes in two days.
When I got back from Tucson, after I had unpacked, I went down to the garage and noticed a little crack in the windshield.
The little crack grew into a much bigger crack.
This is the same windshield I just had replaced a month ago.
Well, as they say: You play, you pay.

The next weekend I gave The 55 a break and flew out to the Goodguys Rod & Custom Show in Texas.
I was announcing the autocross.
And it was in the middle of the Texas Motor Speedway.
I love going to Texas – BBQ & Whataburger make me happy.
One of the cool things about the Goodguys shows is that once you buy your ticket, you can run your car thru the autocross as many times as you can throughout the whole weekend.
All you’ve gotta do is pass the tech inspection.
So you get everything from professionally built pro-touring cars to Mini-Coopers & Fiat X/19’s.
And you get to run into old friends too if you’re lucky.
I got to see my friends Chris & Lynda Jacobs while I was in town.
They were kind enough to strap me in their friends 1987 Calloway Corvette.
An honest to goodness Calloway Corvette.
It’s original twin-turbo was long gone, but they dropped a fresh LS9 under the clam-shell hood. 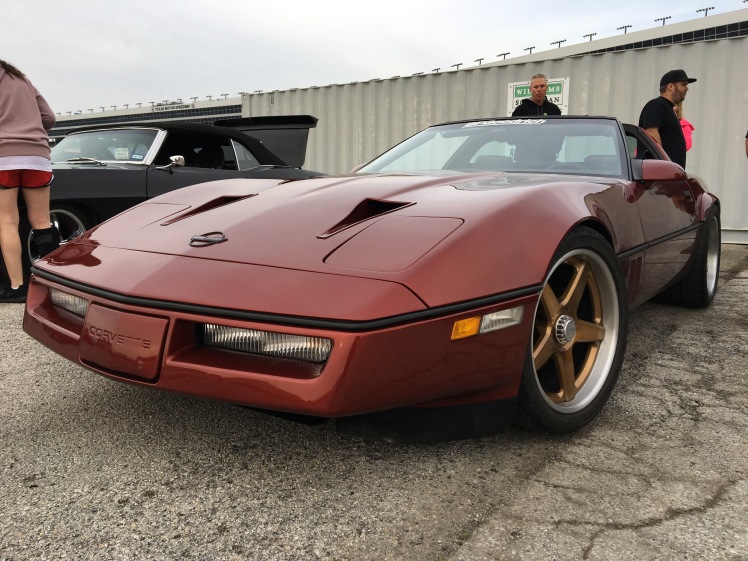 Chris said the only break-in the car has is coming off the trailer and onto the autocross course.
Ya gotta love this day and age of Hot Rodding!
The next weekend I’d be in Scottsdale, AZ, again hosting the Goodguys Rod & Custom autocross.
To get The 55 ready for another road trip I decided it was time to change the oil & filter. 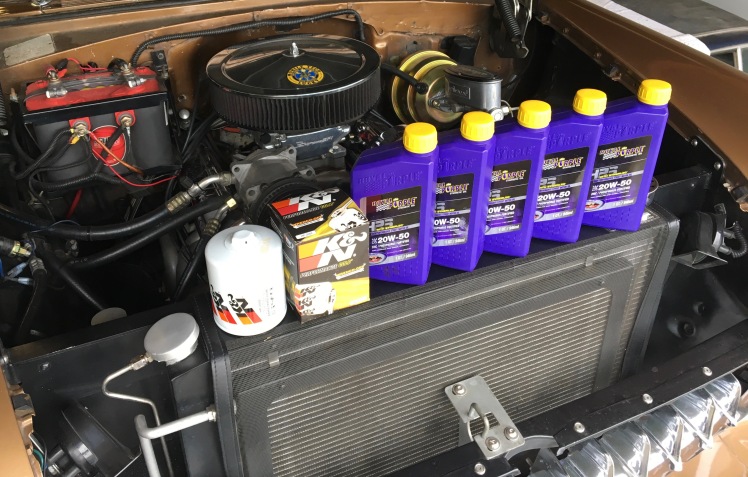 I’ve used Royal Purple synthetic motor oil in The 55 since I got it.
And I love K&N’s oil filters – air filters too.
Their oil filters have a 1-inch “nut” on the bottom so you can use a socket or wrench to easily remove it.
With a new windshield, five fresh quarts of synthetic RP goodness, a new filter and a full tank of fuel, The 55 and I were ready for the trip to Arizona.
We made it there with time enough for me to take a tour of Frank Lloyd Wright’s winter home: Taliesin West. 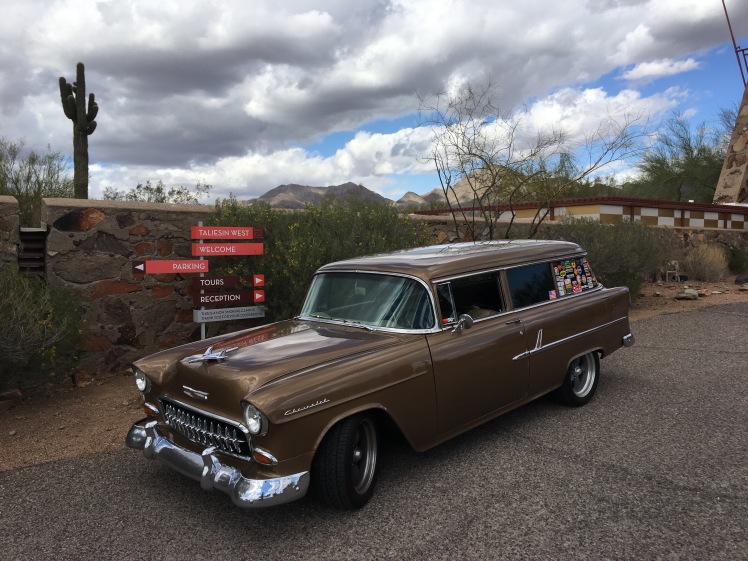 Just like the previous weekend in Texas there were a few Cobra tribute cars out on the track here in Arizona too.
And just like last weekend the owners all wrote “65 427 Shelby Cobra” on their tech sheets.
The only thing is, Shelby didn’t put the 427 in until 1966.
And they weren’t real Shelby Cobra’s either.
I mean, no one in their right mind would be beating up a real Shelby Cobra around an autocross track.
Right?!?
I wish they’d put “FFR” or whoever made ‘em on the tech sheets, because they’re not real Shelby’s.
Well… in Scottsdale, Arizona there was a real, Shelby.
CSX 3170.
Number 70 of the first 100 street cars built.
Not a kit-car.
Not a tribute car.
And not a continuation car.
A real, honest-to-goodness, 1966 427 Shelby Cobra.

It’s original 427 was out, but in its place was a destroked 440 that screamed!
The little Cobra ended up winning the autocross shootout by a full second over 2nd place.
Oh yeah, 2nd Place was none other than Robby Unser in the Speedway Motors 67 Camaro.
One of my favorite cars both weekends was a red 63 Corvette.

The owner bought it new in 1972 and he’s been racing it ever since.
The 327 was gone when he got it, but in its place is the best sounding LS7 I’ve ever heard.
Seriously.
This guy is on it hard every run!
It is a thing of beauty.
And then there’s this beautiful 1970 Chevelle.

I walked up to the owner and asked him what’s under the hood and he said: “Just an LS1.”
Seriously?!?
It’s got a built LS, a T-56 6-speed, a cage and he let’s it eat!
It warms my heart that are guys like these who are still driving the heck outta their cars.
Maybe I’ll get The 55 out on the autocross track next weekend in Del Mar.
Who knows?
If you’re in the area you should “Come on down!”
It’s gonna be a good time.