The new engine is in and it is a running and driving machine.
Well, it is running…
And it does drive.
But the damn thing wouldn’t let the torque converter lock up on the freeway.
At 60 mph the tach reads 3100 rpm.
Not good.
Over the years I’ve become friends with some of the Technical Support guys at Holley.
Josh asked me to email him the Global Configuration File so he could take a look at it.
He came back and told me that the torque converter is in fact being told to lock-up by the ECU.
But it doesn’t feel like it’s locking up…
Tom the Tuner came by and set up a tune for it.
It is amazing to me to watch and feel how the car reacts to Tom’s keystrokes.
He’s the Mozart of Laptops.
Before his tune, we made a few hits on it and the car fell on its face at 4000 rpm.
The computer stopped feeding it fuel at 4000 rpm for some odd reason, so Tom told me to pull over and he created a new tune from scratch.
12 minutes later – on a closed-course in Mexico – I rolled into the throttle and at about 4100 rpm the damn thing downshifted and took off.
Niiiiiice.
Now it moves pretty good going down the street.
But it’s still revving higher than normal on the freeway…
And when we’d stop, the idle kept surging from 600-1200 rpm.
After a few clicks on his laptop Tom the Tuner had the idle pretty much dialed in.
He told me I just need to drive it so it can learn on its own.
Pretty cool right?!?
And I’m happy to report that after a quick lesson, I’ve figured out the new TCI Diablo shifter.
I dig the way it shifts and it looks super cool. 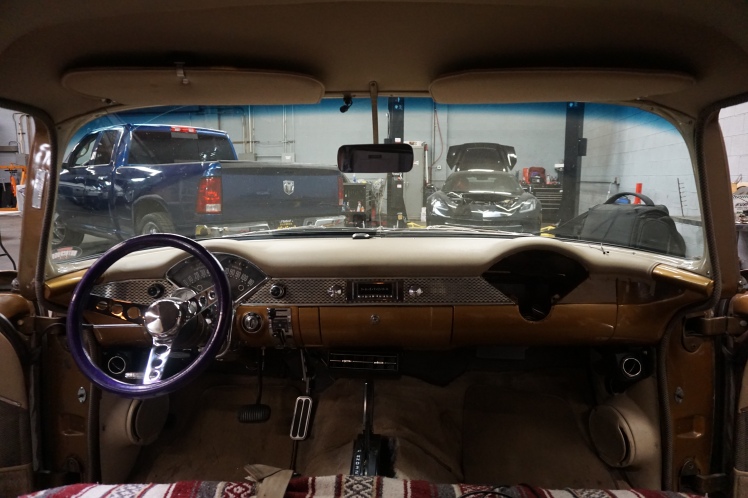 The line lock is hooked up and it works but I haven’t used it for a burn-out yet.
I want to get everything dialed in before I start doing burn-outs.
Yeah… I cant believe I just wrote that either.
And the N2O still isn’t set up…
Again, I’m more concerned with getting it all sorted out and the torque converter to lock up before getting jiggy with it.
I love the customizable information screen included in the Holley fuel injection kit. 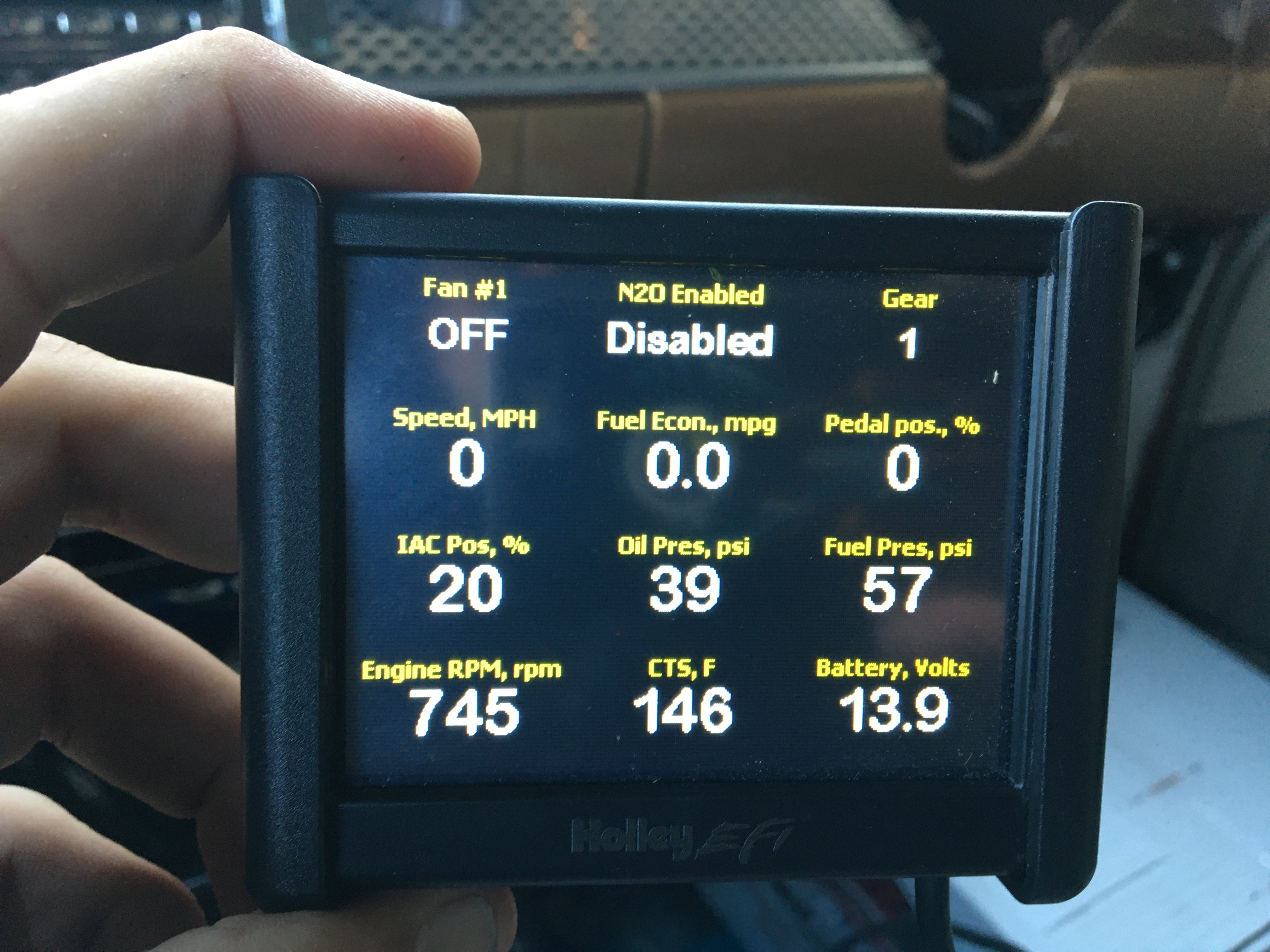 This is how I’ve got mine set up.
On the top row it shows if the fans are activated, if the N2O is enabled and what gear the transmission is in.
The second row has the current speed, the fuel economy, and the throttle position.
The third row shows the IAC, the oil pressure, and the fuel pressure.
And the forth row shows the RPM, coolant temp, and the volts.
It’s customizable too!
You can set up to three different custom screens so you can monitor pretty much anything you can think of.
And you can set the warning lights on the gauges themselves, so if the coolant temperature gets too hot or the oil pressure gets too low, it’ll alert you with a yellow and then a red light to warn you.
Back to the torque converter issue.
I took it over to Jimmy at Hiro’s Transmissions.
He’s the guy who rebuilt the transmission in the first place, so hopefully he’ll know what to do.
Jimmy told me when he touched the brake pedal he felt the converter lock up.
But thats not supposed to happen…
It turns out, the Torque Converter Controller (TCC) needs power removed to unlock it, so it needs 12 volts…
And to make matters worse,  that’s the opposite of how its wired in the instructions.
The wires were switched, a relay was added and I was told to go drive it.
It’s a night and day difference.
I felt the difference just driving down the street.
Then when I got on the freeway…
At 80 mph it’s turning 3000 rpm – waaaaaay better – but it still seems a little high to me.
Jimmy confirmed that at 80 mph it should be at 2650 rpm.
I put over 100 miles on it – mostly on the highway – and it ran like a champ.
Sitting in traffic it never got above 195 and once we start moving it drops right down to 180.
The big test will come when I take it to Las Vegas for SEMA.
Speaking of SEMA, I met Heather Storm earlier this year, You may remember her from “Garage Squad” on the Motor Trend channel.
It turns out she’s got an old car and she loves to drive it.
She seems pretty cool with the exception that her old car is a 1965 Ford Mustang. 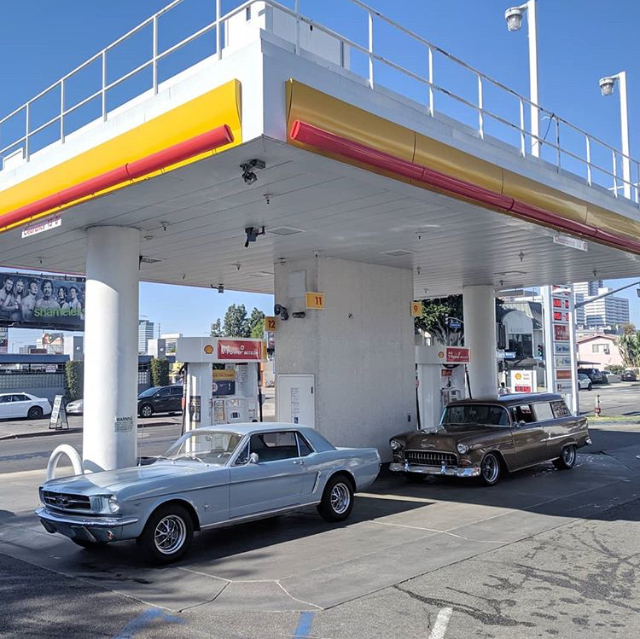 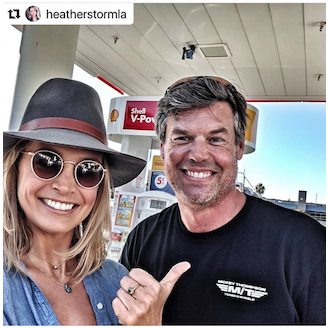 We met up in Santa Monica at the end of Route 66 and headed towards Las Vegas. 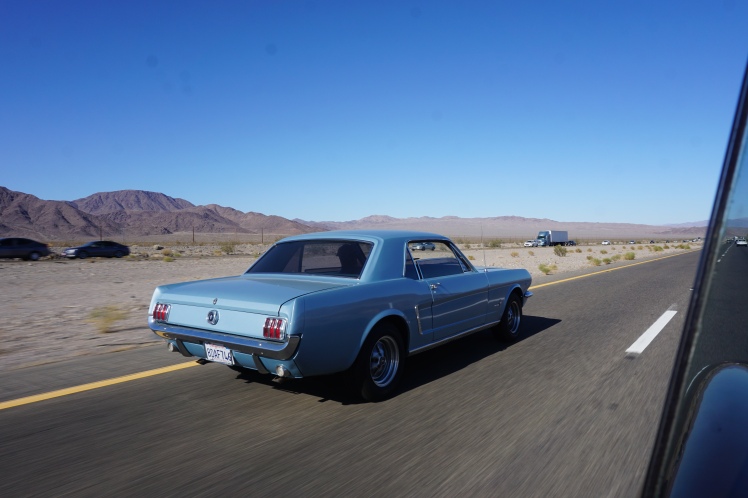 The 55 ran great, with the exception of a little smoke.
It started smoking when we got to the hill going up to Victorville.
I put in a little too much transmission fluid, now when it gets hot the fluid drips out of the overfill tube onto the headers and it smokes.
The coolant temp stays at 180 but the transmission gets hot.
And because of all my trash-talking about her Ford, Heather was kind enough to get a video of The 55 blowing smoke and post it up on social media for me.
Nice.
Both cars made it to Las Vegas without any problems.
Heather said she recently put her Mustang on a strict no-carb diet and went with a FiTech Electronic Fuel Injection system and she loves it.
I’ve got a Chevy with Holley MPFI and Heather’s got a Ford with a FiTech throttle-body fuel injection.
It’s pretty cool that in this day and age, if you’re wanting to convert your old carbureted engine over to Electronic Fuel Injection, there are a lot of different options for you from quality manufacturers with great customer support. 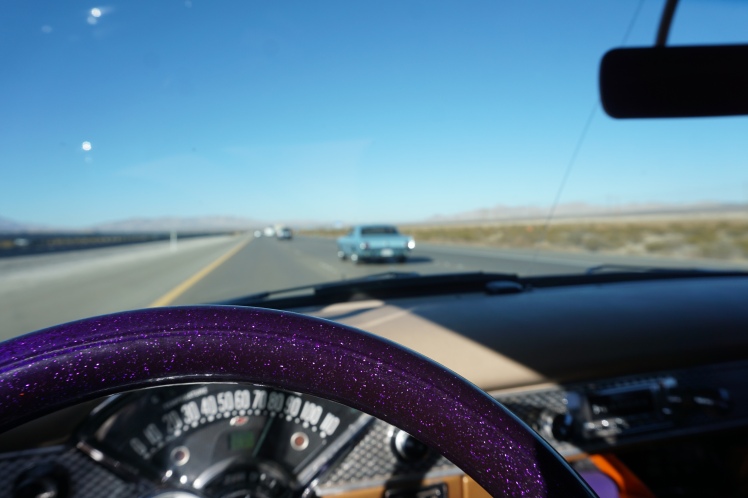 SEMA was awesome as always.
The cars are one thing, but it’s the people – my “car-family” – that makes it the best event of the year because everyone’s there.
SEMA is always a blur – working all week, getting to see the latest and greatest car creations in the land, and seeing everyone is exhausting.
But it’s one of my favorite weeks of the year.
Before I left I waited in line at the FiTech booth to get an autographed poster.

After four days at SEMA I fueled up The 55 and we were off to Pleasanton, CA for the Goodguys Autumn Get Together.
I was hoping to catch the new “Ford vs. Ferrari” movie at the Barstow drive-in but they were closed… 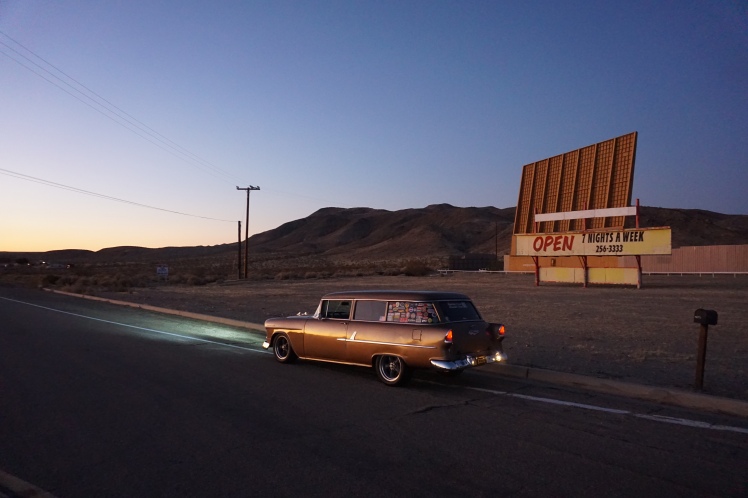 The 55 ran great up to Pleasanton and we made it to the Autumn Get Together on Saturday morning. 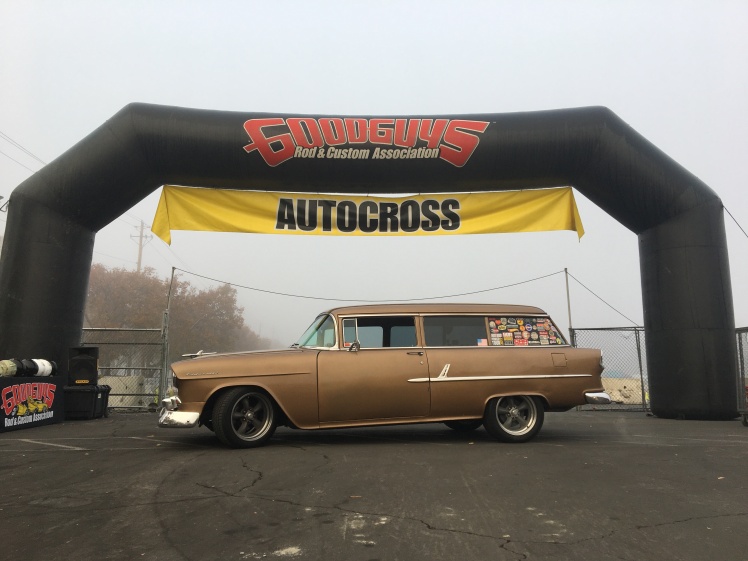 On the way back to LA all was good until we got to the Grapevine hill.
That’s when it started to smoke…
Again.
But I know as long as I keep the air flowing thru my Mattson’s cooling module it’ll do its job.
And it did.
We made it back to LA on Monday.
Tuesday I had a Voice-Over session in the valley.
Wednesday I had Aaron at Orange County Hot Rods install a new windshield and side glass on The 55.
I went thru three windshields last year, and on my way to the Duel in Del Mar in April I gotta crack right down the middle of the windshield, so it was time for a replacement.
With my beautiful new windshield installed I went home, packed up and Thursday morning we drove out to Scottsdale, AZ for the Goodguys Duel in the Desert.
Two miles from the hotel I heard a “crack.” 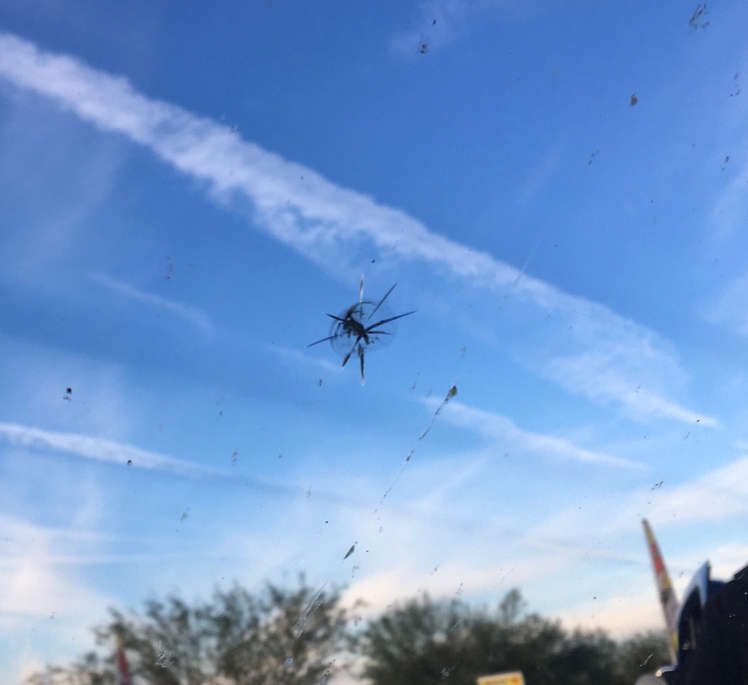 Looks like it’s time for new windshield.
Again…
Friday morning at the Autocross I’m minding my own business when Mike from Wilwood comes up and tells me The 55 needs new brake pads.
If you remember last year, I was coming down from Sequoia National Park on my way up to the Goodguys in Pleasanton and heard some nasty metal to metal grinding.
When I got to the show, I asked Mike over at Wilwood what was up.
Mike told me I needed new pads and he proceeded to change out my brake pads on the spot.
He did the same thing for me again on Sunday – he put new Wilwood brake pads on The 55 while I was announcing the Autocross.
I’m told that the new pads are a little more aggressive so I can brake a little later and they won’t wear out as fast.
I’m still blown away at their customer service.
When it comes time for you to upgrade your brakes, consider the brand , but also consider the customer support you get.
When I go to a car show I look to see what manufacturers are there in the vendors midway supporting our passion.
They’re the one’s I’m gonna buy my next upgrades from because I know if something happens I just need to make it to the next show and they’ll take care of it.
Wilwood’s one of those companies that has that great customer support.
And not only did he change out my brake pads, then Mike had an idea.
A super-cool easy upgrade idea for The 55 that I’ll share with you after PRI.
The Duel in the Desert was awesome!! 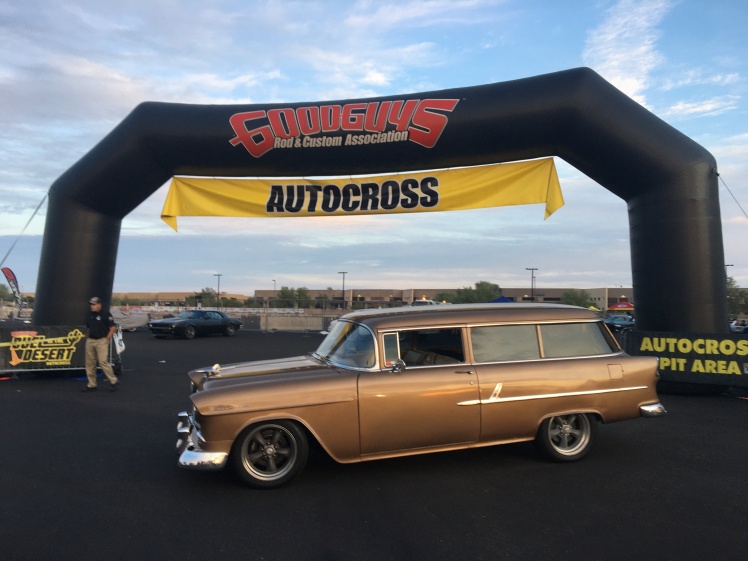 It was a 32 car autocross shootout with the likes of Al Unser Jr., Robby Unser and Scott Frasier in CSX3170 – a real 1966 427 Shelby Cobra.
Scott won with the only 34 second lap of the weekend – 34.999!
What a weekend.
Monday morning on my drive back to LA I stopped off in Thermal, CA to visit my friend DeNae who just gotta gig at the BMW Performance Driving Center which is attached to the Thermal Club.
Good times!!
When we got back to LA we had put over 2000 miles on The 55 in just two weeks.
I think that’s one heck of a shake-down run.
And the torque converter / transmission still isn’t right…
I’m taking it to Hiro’s tomorrow so they can solve The 55’s Transmission Mystery Problem.
It makes me sad that those were my last shows of the year.
Very bittersweet.
If you’re reading this – thank you for being a part of my car-family.
It’s nice that the season is over, but I’ll miss you guys.
Good thing I’ve got my real family back in Colorado.
I’m looking forward to seeing you again soon.
I’ll be driving The 55 all winter, so if you see me out on the road be sure to say hi.
I’d love to see you.
Safe travels.
#idrivea55

Today would’ve been my moms birthday.
Any other @uspostalservice fans out there?
On my way back from the Hot Rod Power Tour I was treated to a spectacular lighting show in Oakley, KS.