With a new Quick Performance 9-inch I left Colorado and headed towards Detroit for the Woodward Dream Cruise. 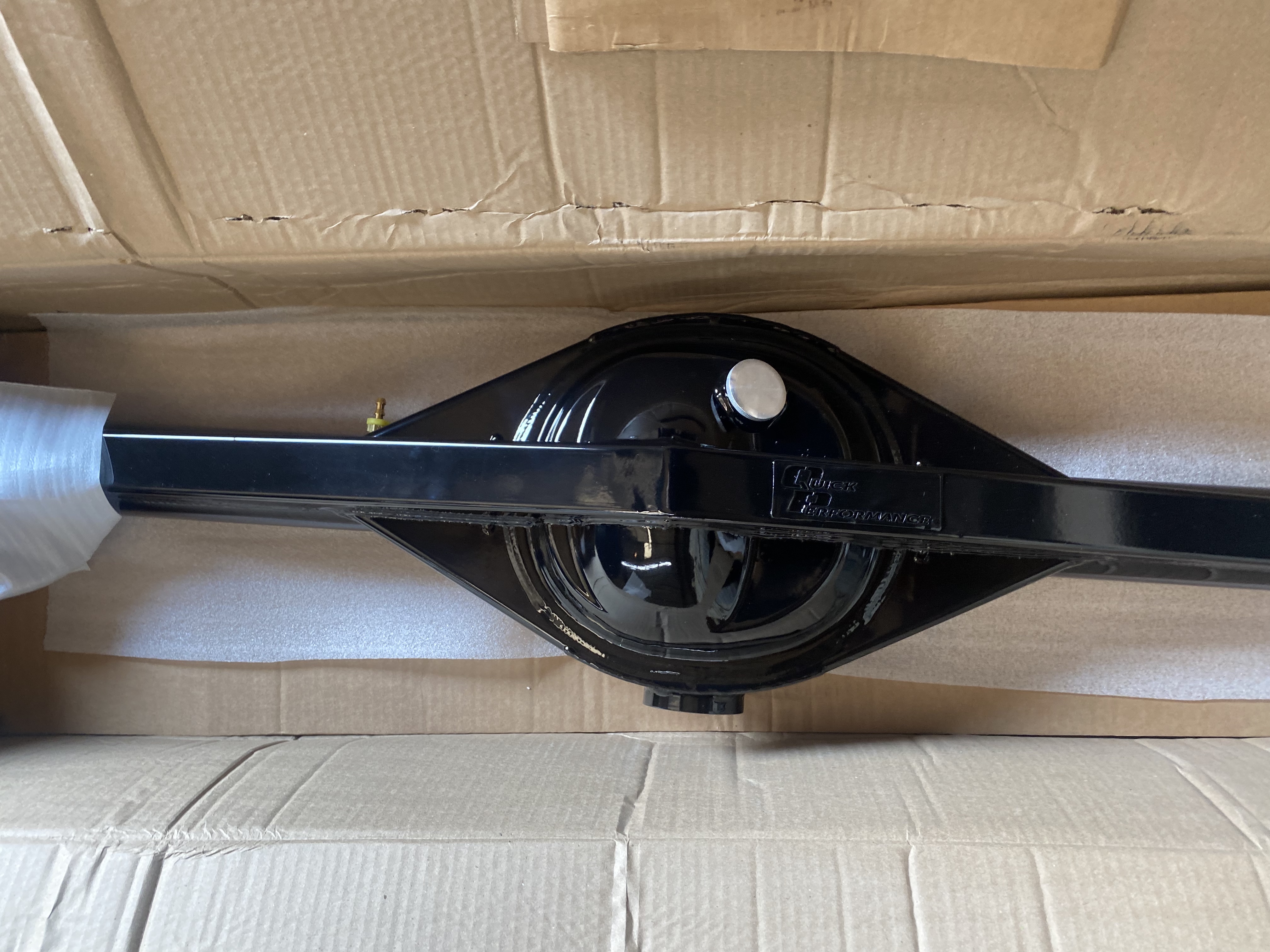 The new 9-inch was humming along fine, but The 55 was running rough.
Not only was it running rough – it was getting horrible milage.
Every so often it would “pop” like it wasn’t firing on all eight cylinders.
My first stop was in Lee’s Summit, Missouri to visit some friends, then I was off to St. Louis.
I had to pay homage at the old Fisher Body Plant in St. Louis – that’s where The 55’s body was created.
The Fisher Body Plant is no longer there, so I pulled into the Police Station across the street and did a little video breaking down the trim tag on The 55.
You can check it out here.
Back out on the road and The 55 was still not running right…
But I made it to Detroit.
My first stop in Detroit was in a parking lot across the street from the GM Warren Tech Center.
That’s where I was supposed to meet my buddy – we’ll call him “John.”
The Warren Tech Center is closed to the general public, but “John” waved his badge and just like that we were waved in.
Driving in is like stepping back in time.
The “Tech Center” has been the center of GM’s engineering effort since its inauguration in 1956 and it looks like it hasn’t changed at all since then.
I wanted to get in to see the GM Design Dome.
The Design Dome was the brainchild of legendary GM design chief Harley Earl.
He wanted a secret room where GM’s leaders could evaluate designs and decide which vehicles to build.
Virtually every vehicle GM has built since the 1956 model year was given the green-light before production in the Design Dome.

While I was taking pictures – “John” was on the phone looking for a solution to The 55’s popping problem.
When I told him I was on my way to see our mutual friend Bud, “John” said “Bud can fix anything!”
I made it to Bud’s garage and he told me it was time to change out my spark plugs.
New spark plugs helped a little, but it still wasn’t right.
The next day I had an appointment to get into the GM Heritage Center Collection, but Bud had a better idea.
I had been to the Heritage Center before while I was on Team Chevy, but I had never been to the warehouse where all the overflow cars are stored.
Bud made a phone call and we got our very own private tour of the Heritage Center Collection warehouse.
It was incredible!!
Saturday was the Woodward Dream Cruise and I followed Bud down to Woodward in The 55.
The Woodward Dream Cruise is the world’s largest one-day automotive event.
They say over one million people and around 40,000 classic cars come each year from around the globe just to cruise Woodward Avenue.
Woodward Avenue is the location of the first mile of concrete-paved road in the world.
It’s between 6-Mile and 7-Mile roads and was first paved back in 1909.
That’s some serious automotive history!!
This is a little embarrassing, but when we turned the corner and got onto Woodward Avenue I got a little misty eyed.
Yeah… I got emotional about driving on a road.
After cruising Woodward to our hearts content we went to the M1 Concourse where our friend Murray got us into the show.
The M1 Concourse is a private club with its own track and the members each have their own private garage.
It’s a really sweet set-up.
On Sunday it was time for me to head over to Pilot Transport – the official transport of the Hot Rod Power Tour.
They were having a kick-off party and were going to rally down to the start of the Hot Rod Power Tour at Summit Motorsports park in Norwalk, OH.
On my way over to Pilot I passed by GM’s Milford Proving Grounds.

I had been there before – but not with The 55.
And I had to get a picture.
When I pulled into Pilot, The 55 was still popping and sputtering – it was embarrassing.
But I was among my car-family so all was good.
So good in fact that my buddy Steen asked me what the problem was.
I had no idea what the problem was so we got out my computer and Steen hooked it up to the ECU and we went for a drive.
The first thing he did was to reattach a spark-plug wire that had fallen off.
That helped a bit.
Then he made a call to his friend at Holley.
He thought it was an O2 sensor and the guy from Holley on the other end of the line said they’d have one for me the next day in Norwalk at the start of the Hot Rod Power Tour.
How about that for customer service?!?
Then our friend Brian said he might have a spare O2 sensor at his house five minutes up the road.
We got to Brian’s garage…
This is not your normal garage.
If you give Brian a big hunk of metal – he’ll create an engine out of it.
His garage is nothing short of amazing!!
But he couldn’t find the O2 sensor I needed.
I limped The 55 back to Pilot and put it on the truck.
The Hot Rod Power Tour hadn’t even officially started yet and I was already the first casualty.
As I’m watching The 55 getting put into the trailer I turn around and see a slick black 2014 CTS-V station wagon.
Brian’s slick black 2014 CTS-V station wagon.
“You wanna drive?” he asks me.
“Does a cat have an ass??” I reply.
I chauffeured Brian and his lovely wife from Detroit to Norwalk in a 1 of 32 Cadillac CTS-V 6-speed station wagons.
Yeah – a 6-speed manual!!
We made it to Norwalk in record time.
The next morning the Hot Rod power Tour started at Summit Motorsports Park in Norwalk, Ohio.
While I was hard at work, a bearded fellow walked over to me and said: “Here’s your O2 sensor Jeff. Let me know when you have time to put it in.”
That was Ty from Holley.
Ladies and gentleman – the best customer service in the land – Holley Performance!!
Bud, Brian & Ty changed out my O2 sensor while I was working up on the main stage.
A little later Ty walked up to the stage and showed me his hand – his fingers were all black and dirty.
“That’s from your fuel injectors Jeff” he told me.
“We’ve got a new set of fuel injectors coming for you in Indianapolis.”
Again – the best customer service ever!!
The 55 ran way better with the new O2 sensor – but it still wasn’t right.
When we got to Lucas Oil Raceway at Indianapolis I pulled up next to an old goat – a Pontiac GTO.
The owner and I got to talking about my car troubles and he pulled out a bottle of Lucas Fuel Injector Cleaner and gave it to me.
I said “Thanks, I’m Jeff Thisted.”
He said “you’re welcome. I’m John Lucas.”
As he said his name I looked at the bottle he had just handed me – Lucas Fuel Injector Cleaner…
John Lucas…
Lucas Oil Raceway…
Seriously?!? 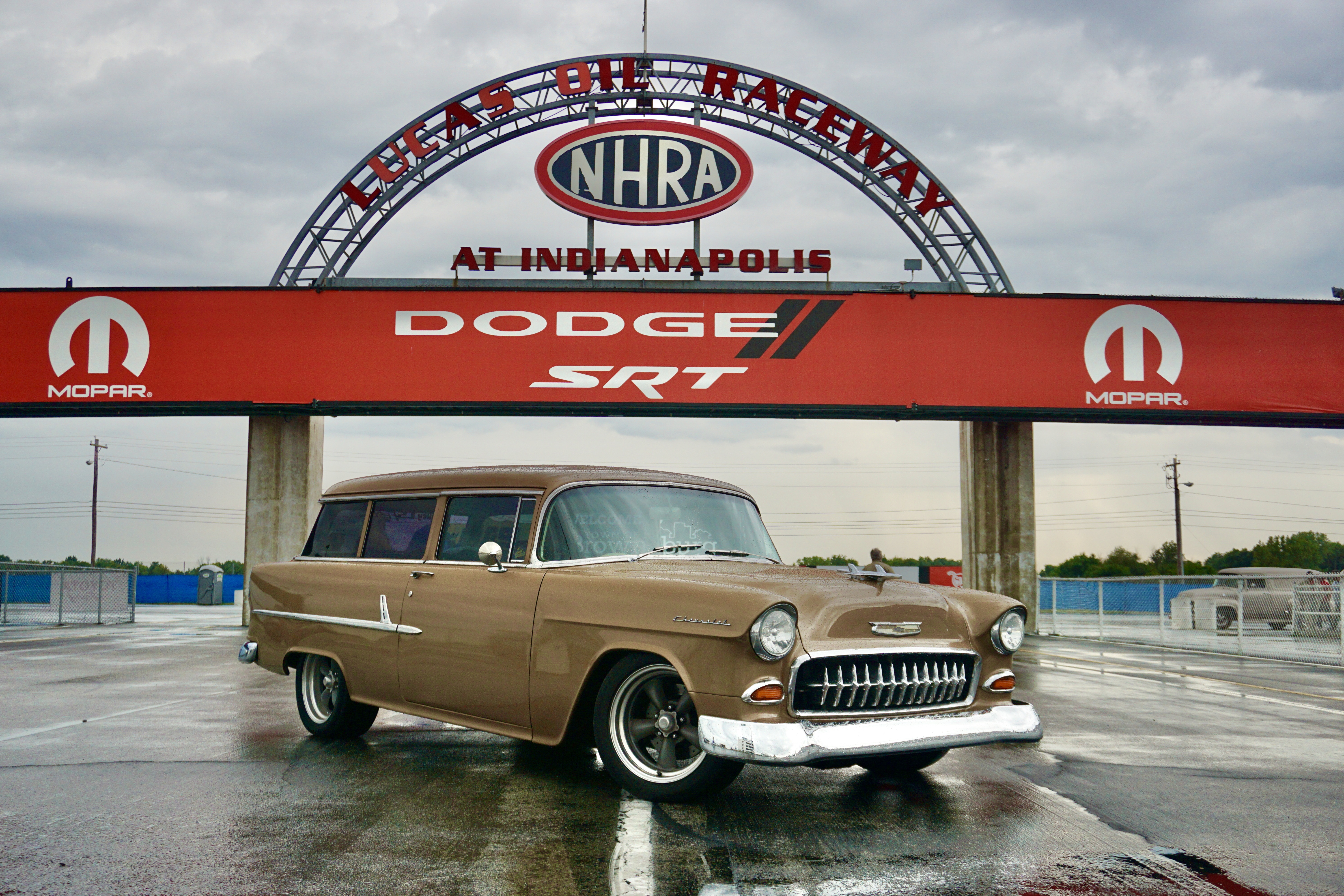 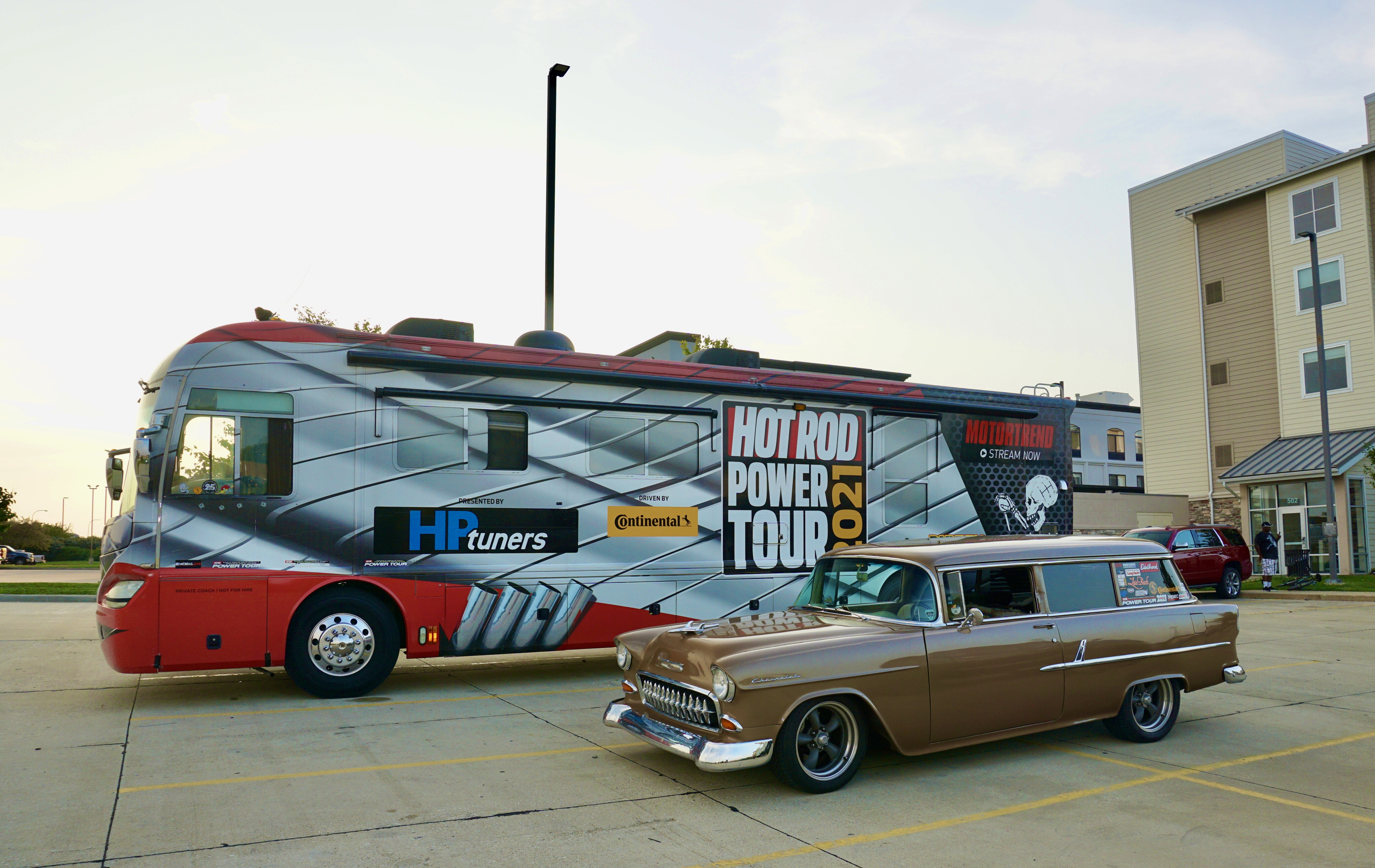 After our last stop in Champaign, IL I went down to see my buddy Mike Cotten.
When I showed up he immediately started popping off my old, dirty fuel injectors.
After swapping out the old injectors – The 55 ran like butter.
Smooth as can be.
So clean out that fuel filter and keep those injectors clean my friends.
From Cotten’s I stopped into Webster Groves to drink bourbon and smoke cigars with my buddy Dr. Buck.
Not only did we get to drink bourbon and smoke cigars, but we got to see the biggest train in the world!!
Big Boy 4014.

Big Boy 4014 was on its way back home in Wyoming after going on a tour across the country.
It’s the only one of its kind in the world that’s still running and it – is – AMAZING!!
It shook the ground as it rumbled by.
Truly a sight to behold.
Check it out here.
I drove thru the town of Oakley, Kansas and stopped by the Oakely Livestock Commission for a quick picture

I had dinner at Buffalo Bill’s Bar & Grill in Oakley before finding a quiet place to crash for the night.
While having dinner my iPhone showed a weather storm advisory for the area.
Looks like I was in for a show.
And it did not disappoint!

Mother Nature put on one hell of a light show that night!!
Early the next morning I hit the road and noticed that US-40 paralleled the railroad tracks.
And there was a whole lotta work going on on the railroad tracks.
My guess is that they were getting ready for Big Boy to come through in the next few days.
We made it into Colorado on Highway-40. 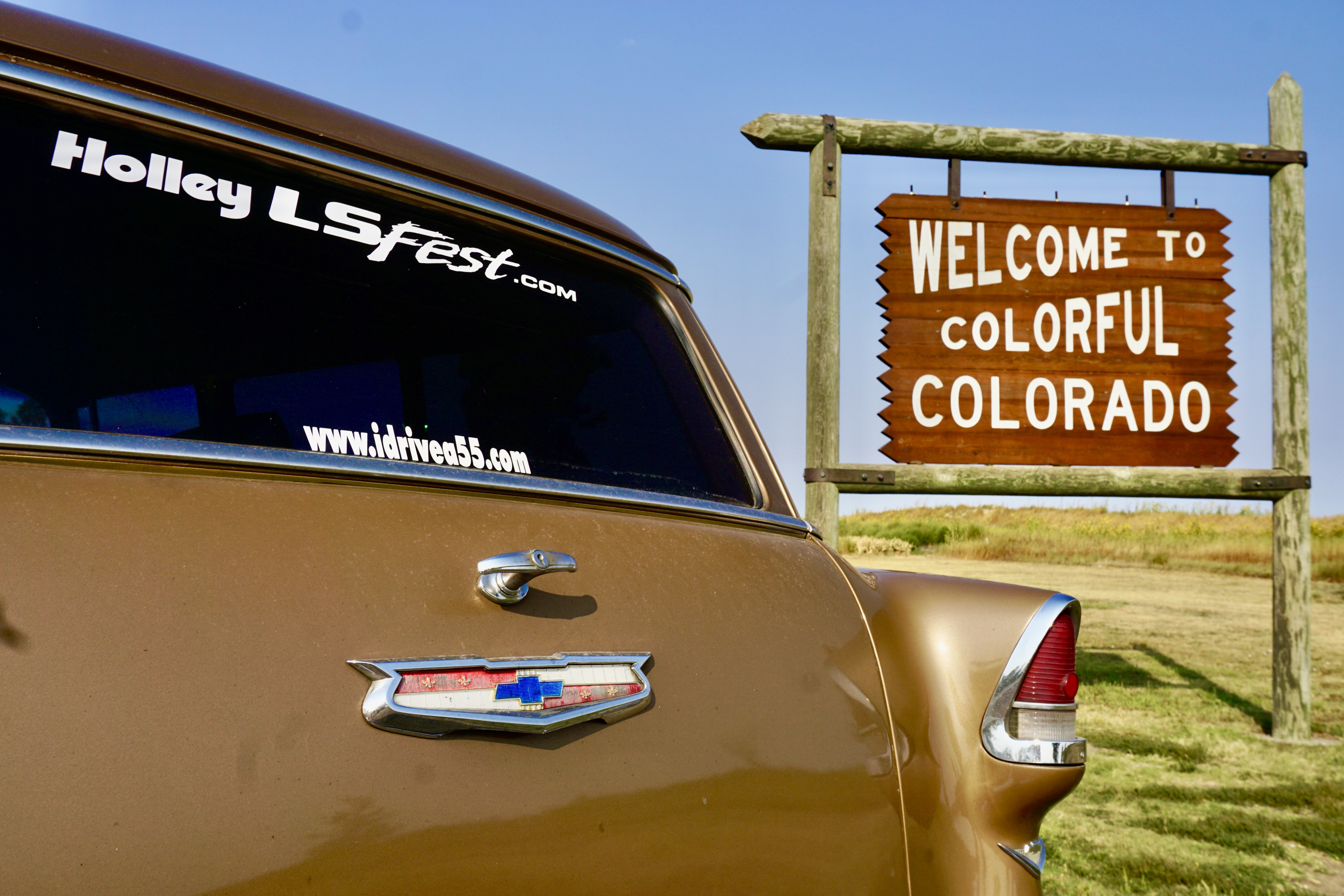 I had to stop at the Rush, Colorado Post Office for a photo opp.

And I stopped by Ellicott High School – where my mom taught English. 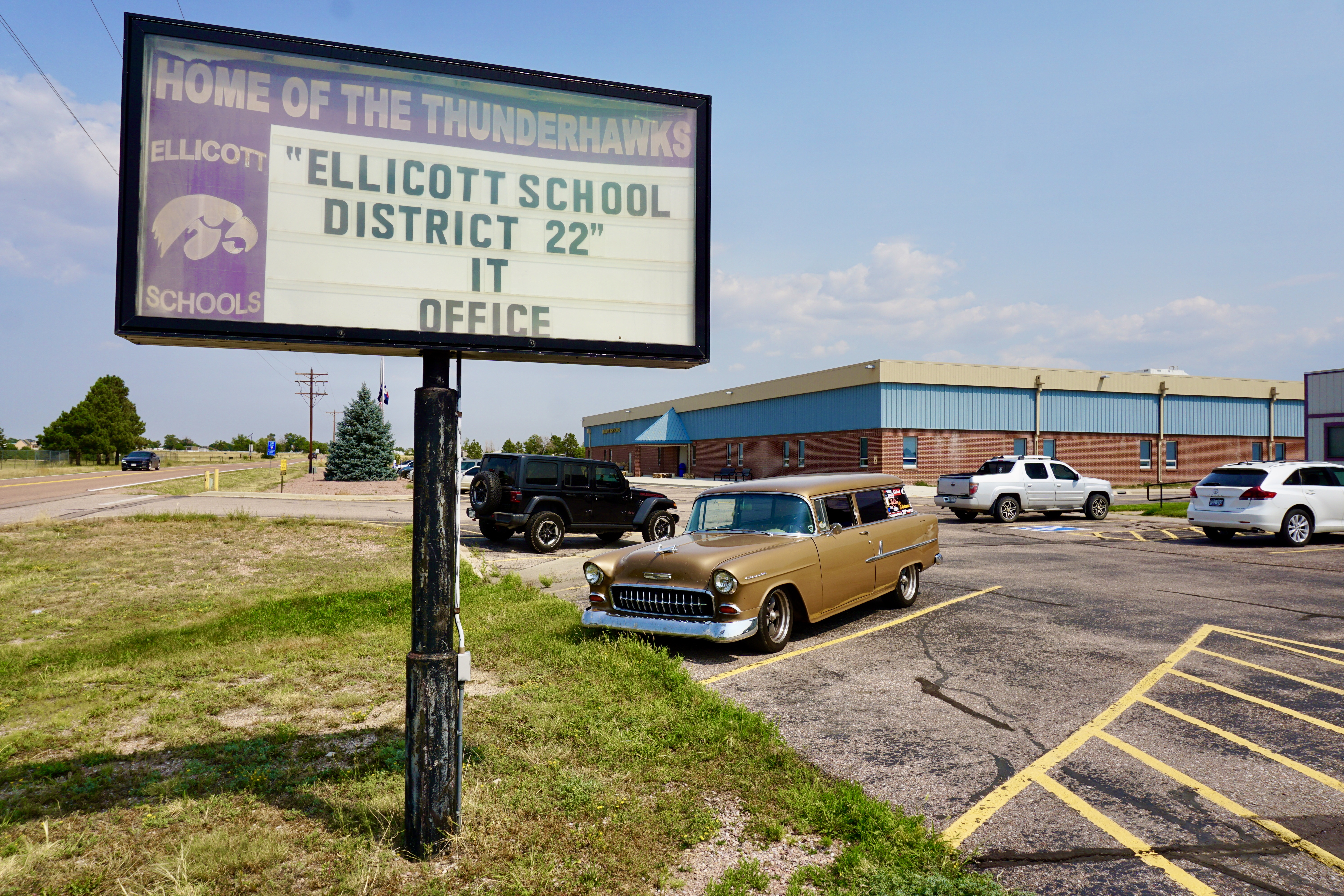 My mom died from cancer about 20 years ago and during her funeral there was a tornado that blew through Ellicott.
It was strange because Colorado doesn’t get a lot of tornados.
No one in Ellicott was hurt that evening because everyone was at my mom’s funeral the same time the tornado hit.
But the tornado destroyed my Mom’s old classroom.

From the Gazette Telegraph newspaper: “Sure her classroom was destroyed in the storm. Maybe that’s fitting. Maybe it wouldn’t be right to have anyone else’s name on that door.”
Reading that always gives me chills.
From Ellicott I drove into Colorado Springs on Highway 24 – the same road my mom used to take into school every day.
I stopped at the church where she’s interned and paid my respects.
Then I was off to Fargo’s Pizza for my favorite pizza in all the land – the Mainliner.
All in I drove almost 4000 miles from Colorado to Detroit and the Woodward Dream Cruise to the Hot Rod Power Tour Long Haul and back to Colorado.
It was a great time and an awesome adventure.
Thanks to everyone who put me up, showed me around and repaired my car.
Now I’ve gotta get The 55 ready for our next road-trip.
Thanks for coming along for the ride.
I’m Jeff Thisted and I drive a 55.
#idrivea55

I love my @wilwooddiscbrakes
A big Thank You to @continental_tire !!!
#flashbackfriday to when I was on the @history channels History of Hot Rods and Muscle Cars and needed a shave and a haircut.