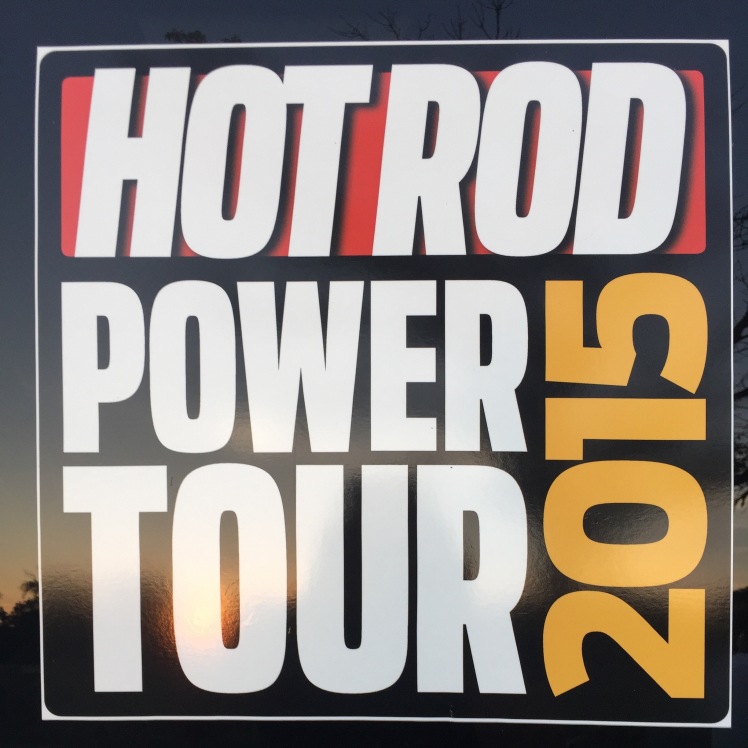 My iPhone rings and it’s my buddy Clarence Barnes.
“Haaaaaaaaaay Buddy.” He says. “What cha doin’?”
“CB buddy how are ya?!?” I reply.
“I’m good. I was just wondering if you wanted to go on The Hot Rod Power Tour with me this year?”
I knew CB had been hosting the HRPT for years, and I had always wanted to go.
If you don’t know what the Hot Rod Power Tour is, let me explain.
The guys at Hot Rod Magazine got sick and tired of the “Trailer Queen” trend.
Cars that aren’t driven – they’re trailered from event to event – and rolled on and off of a trailer.
They’re too nice to drive – if you drive ‘em you scratch ‘em.
That’s how perfect they are, and that’s why they’re called “Trailer Queens.”
So the guys came up with the idea to go on a cross country road trip in some of their project cars and the Hot Rod Power Tour was born.
Last year was it’s 21st year…
And if you’re a car-guy like me, the Hot Rod Power Tour is a must.
Seriously… It’s that cool.
So I asked Clarence how much I’d have to pay to go.
He said: “We’re gonna pay you you idiot! You’re gonna co-host it with me.”
It was nice to have his blessing, but I still needed to get the approval of the mastermind behind the whole thing.
I was on a break at the New York International Auto Show when my iPhone rang.
…It was The Mastermind.
She tells me Clarence put in a good word for me and then asks me if I’d like to be a host on the 2015 Hot Rod Power Tour.
I can’t believe this is really happening.
The HRPT is billed as the world’s biggest road-trip.
Last year we started in Madison, Wisconsin and ended up in Baton Rouge, Louisiana.
Seven cities in seven days with thousands of hot rods. 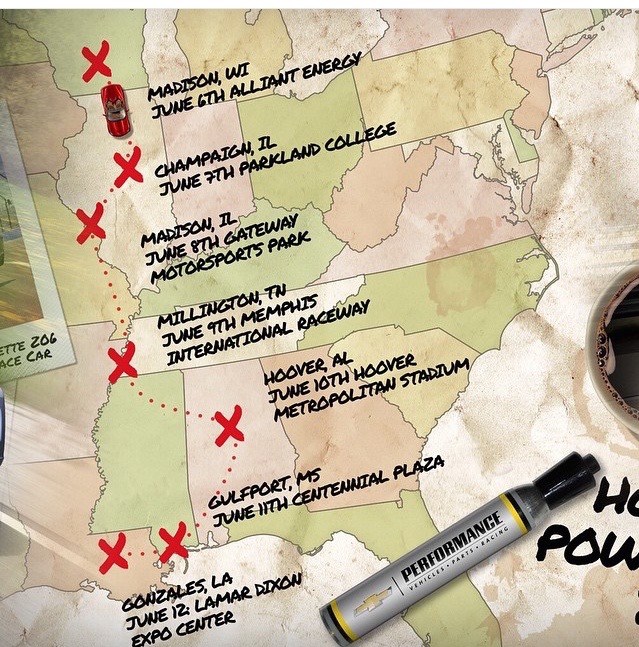 After we check into the hotel, I unpack my things, turn on the TV and start returning emails on my iPhone.
As I’m settling into my room I hear the rumble of a big-block.
When I open up the curtains and look down I see the hotel parking lot is full of Hot Rods.
Then I looked out across the hotel parking lot to the Alliant Energy Center where the Power tour was going to start tomorrow morning and saw that their parking lot had hundreds of cars in it.
And there was a line of cars waiting to get in.
What the hell was I still doing in my hotel room?!?
As I exited the hotel lobby, I almost walked right into the Roadkill van. 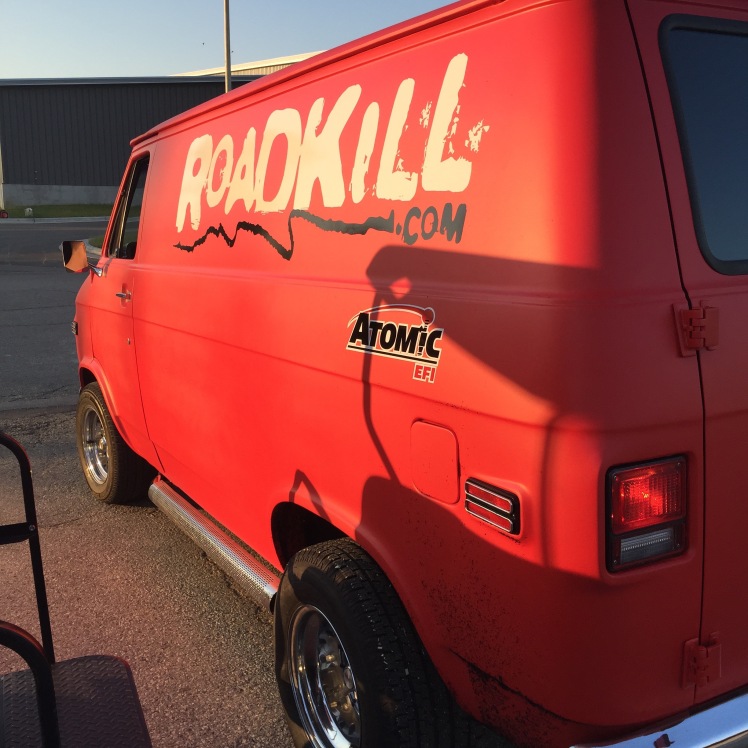 The Roadkill van is a van that David Freiburger & Mike Finnigan put together for their Roadkill show on the MotorTrend Channel.
It’s got a Lingenfelter built LS7 with an MSD Atomic fuel injection kit on it and they aren’t afraid to drive it like they stole it as you can tell from the tire rubber on the rear quarter.
After gawking at the Roadkill van I walked across the street and started checking out the cars.
It was pretty overwhelming…
And The Power Tour hadn’t even started yet.
The next morning, we met in the hotel lobby.
CB finagled us a ride over to the fairgrounds with Summer and Rory from Gibson Exhaust in the back of their pickup truck.
On the way over CB got called out in the back of the truck by a car-load of guys in a Chevelle asking for help.
They had just installed a new EFI set-up and it wasn’t working right.
If you’ve got car troubles on the HRPT – someone will help you get it fixed.
CB took the guys info and told him we’d give it to the guys at Comp Cams who make the FAST EZ-EFI system and we were off.
When we got there CB brought me over to the motor-coach and introduced me to everyone.
The nicest guy there is Doug Evans: a big, mustached, retired Marine who sounds like the manager from the movie “Major League.”
He tells me: “Welcome to the Power Tour kid. Lemme know if ya need anything.”
He’s a super nice guy.
Then CB rolls up in a golf cart and tells me to hop in – we’re off to check out the cars.
So many cars and so little time.
One of the cars that really stood out was a red 69 Camaro called “Hellfire,” built by Mark Stielow, a GM engineer that builds insane first-gen Camaros.
It’s bright red and sports a blown LS7 with 953hp, a Tremec T-56 6-speed manual, carbon ceramic brakes with ABS and a full carbon-fiber front clip.
It was here and it was going to be driven on the HRPT. 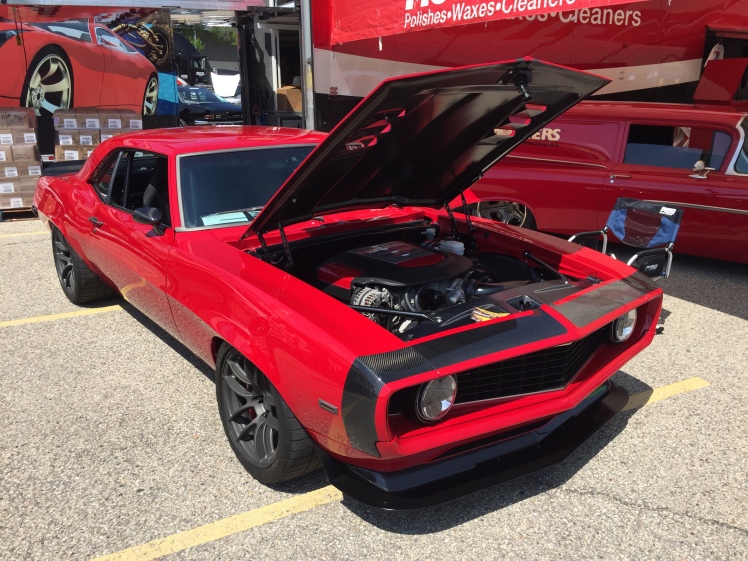 While we were out we ran into Ken Lingenfelter – THE MAN at Lingenfelter Performance and a super nice guy.
After talking for a few minutes CB gets a call on the radio telling us to go to the main stage.
It was time to go to work.
But before we went to the stage CB throws me a polo shirt and says: “Here ya go buddy.”
I look at the shirt and it reads: Hot Rod Magazine Staff.
Glory be – It’s official!!

We get to the stage and I see that the Chevy Performance big-rig is set up beside our stage.
And they brought cars…
A white 2015 Corvette ZO6, a 1971 Corvette with a 2015 LT1, 1984 Monte Carlo with an 525hp LS376, a 2015 Camaro, and an SS sedan.
But hiding away in their tent they had a car all covered up.
And no matter who I asked, no one would tell me anything about it.
They just told me to I’d have to wait for the unveiling.
When I heard they were getting ready to unveil it, I grabbed my mic, hopped off the stage and ran over to check it out and give a play by play.
The cover came off to reveal a liquid black 1967 Chevy Nova dubbed the “Nova 2.0.”
It’s got a 2.0L turbocharged 4-cylinder LTG crate engine under the hood putting out 272hp and 295 lb. ft. of torque.
You can order one straight from the Chevrolet Performance Parts Catalog.
When I heard “4-cylinder” I thought: “Oh no!”
Until Craig Shantz said: “This little 4-cylinder engine’s got more horsepower than the old Corvette 327.”
That’s when it really hit me.
A 4-cylinder with more horsepower than a Corvette V8?!?
That’s nuts!!!

After a long day on stage we were exhausted.
We went over to the HRPT motor coach where Doug was manning the BBQ.
I ate as much as I could before I was distracted by a purple flamed Cadillac doing a massive burnout not even 100 feet from us.
I love the smell of burning rubber…
After that Jenny gave me a five minute warning…
It was time for us to boogie.
We were on our way to Champaign, Illinois for the next stop on the 2015 Hot Rod Power Tour.
What a day!
Only six more to go…
Hashtag – Living the dream!!