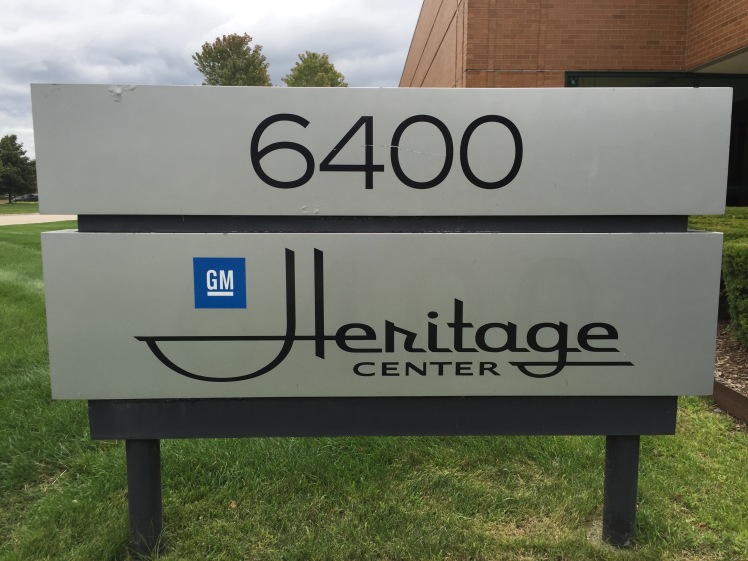 I’m a car-guy.
I’m also a Product Specialist for Chevrolet.
And that means I get to go to training once a year to learn about the all new stuff coming out.
Last year we got a treat.
They took us to the GM Heritage Center – General Motor’s private car collection.
The Heritage Center is located right in the middle of an industrial area outside of Detroit.
You’d never know there’s a priceless collection of cars in there.
When I walked in I was greeted by a car from “the best damn garage in town” – Smokey Yunick’s 55 Chevy NASCAR racecar #92. 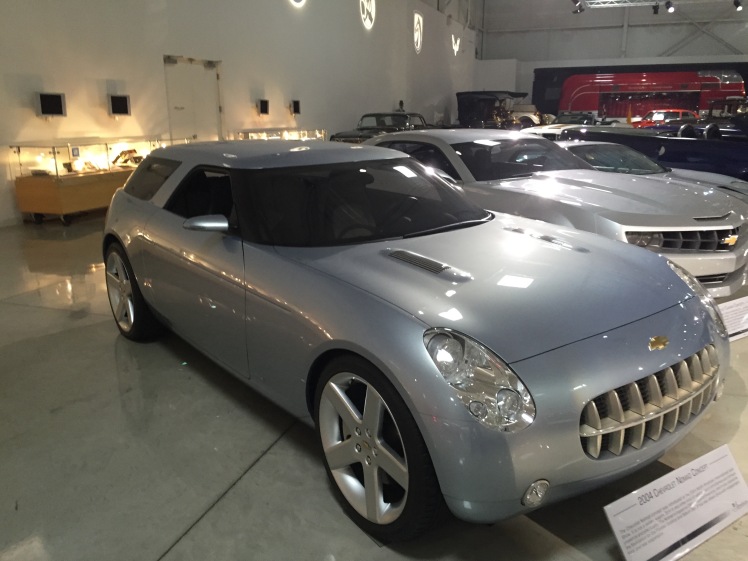 Just beyond the Nomad are two of my favorite cars.
I’d read about them for years and years and now here they were in front of me.
The 61 Corvette Mako Shark 1 and the 69 Manta Ray concept vehicles.
The Mako Shark was inspired by the 1959 Stingray racer concept XP87 and was designed as a concept for future Chevrolet Corvette production cars.
Here it is at The Petersen.
As the legend goes Bill Mitchell, vice president of General Motors Styling Staff, caught a Mako Shark off the coast of Florida which he had mounted in his office.
He liked its lines so much he ordered a car to be made to replicate the shark.
He even wanted to paint the car to match the color of the Mako which, apparently, was no easy task.
Allegedly the paint team couldn’t get the color just right, so late one night they stole the Mako shark from Mitchell’s office and painted it to match the car.
Mitchell never caught on – mission accomplished. 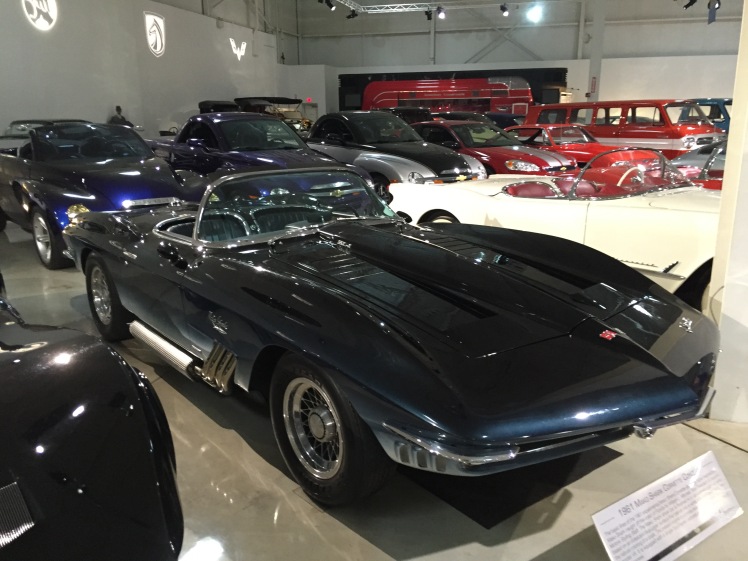 I had just read that the Manta Ray was a new addition to the Heritage Collection.
The 1965 Mako Shark II was sent back to the GM design Studio for changes and renamed the 1969 Manta Ray.
The Manta Ray was the car that influenced the design of the C3 Corvette – 1968-1982.
And get this, on the back of the Manta Ray are twin rear deck mounted flaps that pop up during hard barking to become reflective auxiliary brake lights.
Pretty cool.

The Mako Shark and Manta Ray both currently have 1969 all-aluminum 427 ZL1 engines in ‘em.
The engines alone are worth a small fortune.
I asked one of the curators if he’d pop the hood so I could see the ZL1 in all of its glory and he told me even they weren’t allowed to touch the car.
The Manta Ray has its own handlers, and they’re the only ones allowed to touch it.
Next to the Manta Ray was a 53 Corvette, the first year Corvettes were produced.
Then a red 60, a silver 63, a black convertible 63, a fathom green 69 convertible with side pipes and its factory hard top.
Then a few Corvette concepts: the 2009 Corvette Stingray Concept, the 1972 Reynolds Aluminum Corvette, and the 1973 Aerovette.
Now you know I love station wagons, and when I saw this, I fell in love: A 1969 Kingswood Estate wagon with wood side paneling.
But wait there’s more!
This wagon is special.
It’s got a COPO 427 under the hood!
COPO is short for Central Office Production Order – GM had a corporate edict in the 60’s that forbid the factory to install an engine larger than 400 cubic inches.
The only way around this is a Central Office Production Order, or COPO.
Talk about a sleeper.
And it still had the original window sticker attached to its window.

The Firebird I, II and III were all in attendance.
The 1953 Firebird I is the first gas turbine car to be built and tested in the US.
Firebird II was built in 1956 and is the successor to Firebird I – it’s got a titanium body, a regenerative gas turbine, all-wheel independent suspension with automatic load leveling, power disc brakes and individually controlled air conditioning.
1958 Firebird III is the only member of the Firebird family to have any direct impact on the design of General Motors production vehicles. 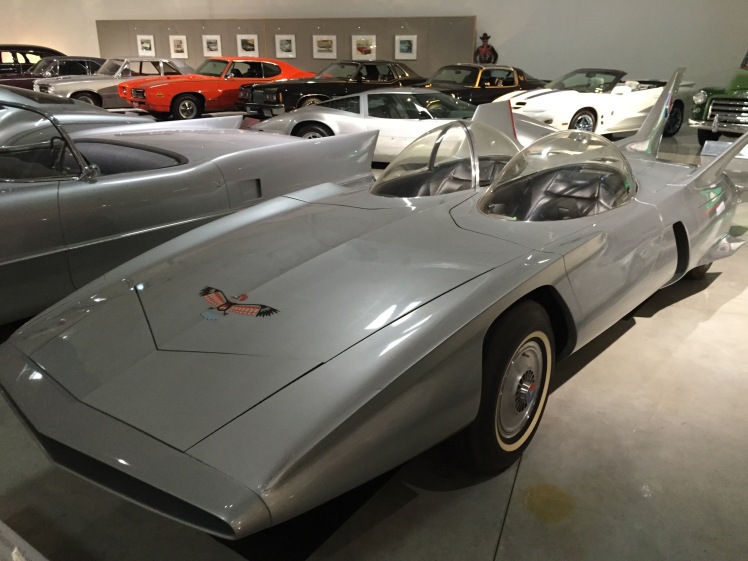 The 1912 Cadillac Model 30 – the first car with an electric starter.

The 1938 Buick Y-Job Concept – the first concept car created by GM designer Harley Earl.
It has hidden headlights, flush door handles and electrically operated windows.
The press reported the Y-Job was more than a concept car – it was the “Car of the Future.” 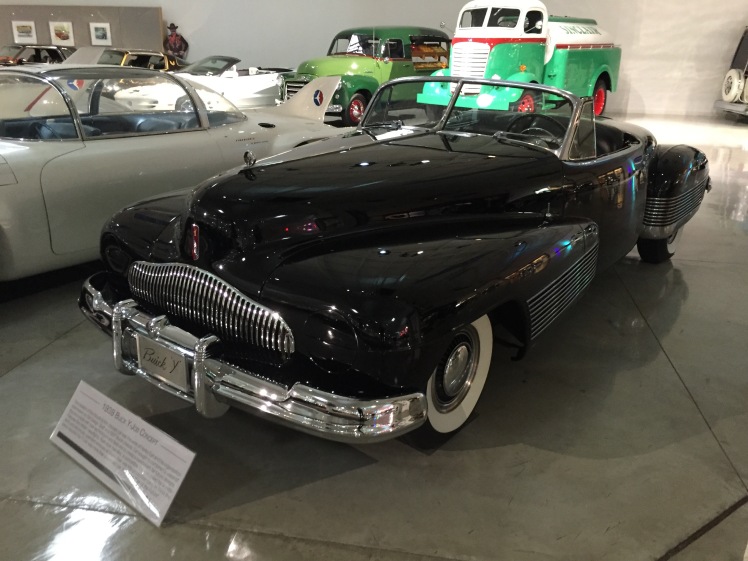 I’ve only scratched the surface of what I saw there.
The place is incredible.
Not only are there around 200 cars on display (out of over 600 in their collection) but they’ve got lots of super cool engines on display: The Mystery Motor, LT5, Cadillac V16, Tri-Power 427 and an L-6 to name a few.
And they’ve got tons of neon signs.
Now… I need your help.
This year at training I’d LOVE to get into the Milford Proving Grounds.
Does anyone have a Milford connection?
If ya do, let me know.
I’ll owe you big time.
But until then, between the GM Heritage Collection, The Petersen Automotive Museum reopening and Al Oppenheiser’s first Gen Six Camaro, I’ve had a pretty good year.
Thanks for coming along for the ride.