Chevy just put the world on notice.
After introducing the Camaro 1LE at the Chicago Auto Show last month, they just announced they’re bringing back the ZL1 Camaro.
And now, here at the New York International Auto Show, the ZL1 Camaro is here in all of it’s “Red Hot” glory. 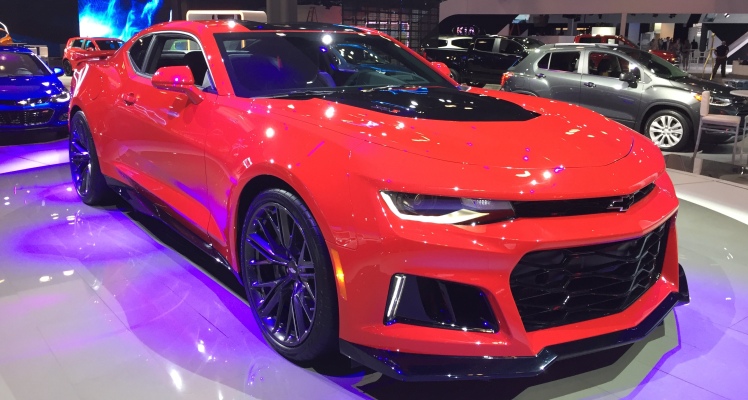 It’s a great time to be alive if you’re a car-guy.
The ZL1 option goes all the way back to the 60’s, and there’s probably no other engine that’s earned more respect during the factory muscle car era than the ZL1.
Chevy’s engineers developed a light-weight engine to compete in the Can-Am series.
The experimental engine debuted in the 1967 Chaparral 2F and became a legend almost immediately.
But there was a corporate edict that forbid any production car to have an engine larger than 400 cubic inches.
The only way around it – the Central Office Production Order – or COPO.
It was GM’s little known method of ordering “fleet” cars like taxi cabs and trucks.
Fortunately for us, it could also be used to get around that corporate edict.
If you wanted a ZL1 you had to start with an L78 396 cubic inch 375hp Camaro.
After you wrote down COPO 9560 on the order sheet, the L78 engine in the Camaro was replaced with the ZL1 aluminum block, aluminum head, 427 cubic inch engine.
You also got a heavy-duty 4.10 posi-trac rear end, heavy duty radiator, cowl induction hood, special springs and a transistorized ignition.
Chevrolet rated the ZL1 conservatively at 430hp and 450 lb. ft. of torque, but in reality it put out around 600hp.
There were only 69 ZL1 Camaros built in 1969.
Maybe it was because the price of the ZL1 option was $4,160.15, while the base price of a new Camaro was $2726.
Now they’re almost worth their weight in gold.
In 2012 Chevy brought the ZL1 back.
It had a supercharged LSA with 580hp and 556 lb. ft. of torque making it the most powerful production Camaro ever.
And it was the first Camaro to use GM’s third generation Magnetic Ride Suspension.
Now, in 2016, Chevy is bringing the ZL1 back again.
This time as a 2017 model.
And it’s purpose built to take on the world.
Virtually every decision was made with performance and aerodynamics in mind.
From the carbon fiber composite hood air extractor to the large outboard cooling ducts on the front fascia, the ZL1 is made to dominate on the road and at the track. 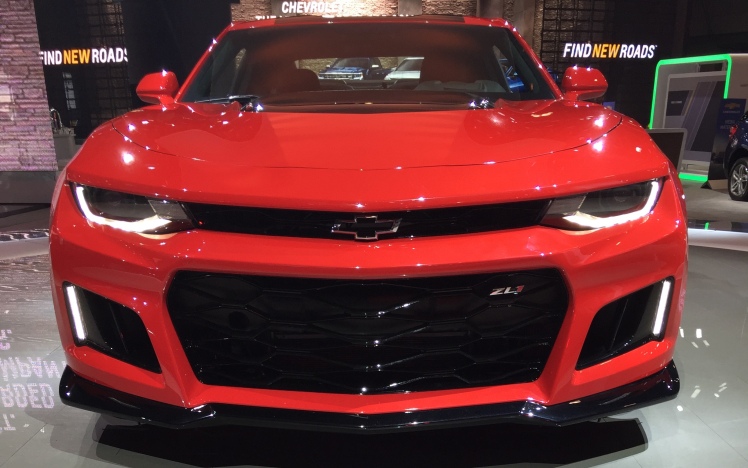 It all starts with the new Alpha platform used in the Generation Six Camaro.
It’s lighter, stiffer and stronger than the last generation Camaro.
The ZL1 features the supercharged 6.2L V-8 LT4 power-plant with it’s own Camaro specific intake and exhaust systems to produce 640hp and 640 lb. ft. of torque.

If you like to row thru the gears yourself, order the Tremec TR-6060 6-speed manual with active rev matching.

It took me four days at the Bob Bondurant School of High Performance Driving to learn how to heel-toe shift – now you just check off an option box and it does it for you.
Or you can choose the all-new paddle-shift 10-speed automatic transmission – the 10R90.
Yeah, you read that right…
A 10-speed automatic transmission.
it gives you smaller steps between gears and it keeps the LT4 in the sweet-spot in its power band.
It’ll be the first car in Chevy’s line-up to get it.

The ZL1 also comes standard with an updated Magnetic Ride Suspension which analyzes the road at over 1000 times a second to make sure all four wheels stay connected to the tarmac.
And with technology like Custom Launch Control and the latest generation of Chevy’s electronic limited-slip differentials (eLSD) Al and his team wanted to make sure all that power gets down to the pavement.
Standard on the ZL1 is a Driver Mode Selector where the driver can dial up eight different vehicle attributes in four different drive modes: Snow/Ice, Touring, Sport and Track modes.
You also get the NPP dual-mode exhaust as standard equipment, so you can tailor the ZL1’s personality to fit your mood.
It’s even got Recaro Sport bucket seats.

The Generation Six Camaro went thru over 300 hours of wind-tunnel testing to increase cooling and reduce aerodynamic lift and drag.
Again, Al and his team took the ZL1 thru over 100 hours of wind-tunnel testing and on-track validation above and beyond the regular Camaro.
The lower grill opening gives the ZL1 greater airflow compared to the Camaro SS.
And the “flow-tie” returns.

First introduced on the Generation Five Z28, the flow-tie is a hollowed out Chevy bow-tie that lets in an extra 2.5 cfm of air into the engine.
The ZL1 also gets a new hood with a carbon fiber insert and heat extractor to pull hot air out of the engine compartment.

And for the first time Chevy’s Performance Data Recorder (PDR) is available in the ZL1.
It was designed for the track, but it’s more than just a track tool.
Take it to the track and it’ll map the track, give you lap times, lateral acceleration and a whole lot more.
On the street it pulls double duty: Get in the habit of hitting the record button every time you drive your ZL1 and if something were to happen, like some idiot side swipes you and says you’re to blame, you’ve got it all on an SD card.
And with the 4G LTE Wi-Fi you can upload it to your insurance company from the comfort of you Recaro sport bucket seats.
Or if you go out to eat and have to give your ZL1 to a valet to park.
If I’m your valet, you know what I’m gonna do to your car.
Hit the record button, tell ‘em he’s being recorded, and anything he does with your ZL1 can and will be used against him in a court of law.
Not only can the ZL1 go, but it can stop too.
Standard equipment on the ZL1 are Brembo four-wheel disc brakes.
The front gets six-piston monobloc calipers with the ZL1 logo, and massive 15.35 inch two-piece rotors.
The rear gets four-piston calipers and 14.37 inch rotors.

It’ll ride on exclusive 20-inch forged aluminum wheels with 285/30ZR20 front and 305/30ZR20 rear tires.
Goodyear’s even developed Eagle F1 Supercar tires with a compound exclusively for the ZL1.
And unlike some competitors, the ZL1 come track ready right off the showroom floor.
It’s got 11 heat exchangers all dedicated to keep the powertrain cool – just like Fonzie.
The new ZL1 weighs 200 pounds less that it’s predecessor, and it’s got about 60 more horsepower and 80 more pound-feet of torque.
There’s even a convertible ZL1.
And here it is in Silver Ice.

Again…
Chevy just put the world on notice – the ZL1 is here – and it’s not here to play games.
It’s here to dominate.
I can’t wait to drive it.