I’ve wanted to get into this guys garage ever since I first heard about it.
First of all.
He says he’s not a collector, he’s a “rabid enthusiast” and a “caretaker for these cars.”
Second – he’s The Real Deal.
For his 70th birthday, as a gift to himself, he remodeled one of the buildings he owns to house some of his cars, motorcycles and even an old wooden boat.
This building of his just so happens to be hidden away in plain sight a block off of Rodeo Drive in “The Golden Triangle” of Beverly Hills, CA.
Last year I saw on Facebook that a buddy of mine Jeff Schwartz from Schwartz Performance got a tour of The Garage.
Jeff was kind enough to contact Bruce about getting me in.
Oh yeah!
I almost forgot.
The guy I’m talking about is Bruce Meyer.
Not to be confused with Bruce Meyers who created the Meyers Manx dune buggy.

Bruce Meyer, the guy who was the driving force behind getting hot rods into The Pebble Beach Concourse d’Elegance.
He’s a self-made car-guy who insists he’s just been lucky enough to be at the right place at the right time.
Well, lucky or not, he’s a super nice guy with an unbelievable garage.
I drove the 55 and parked in the underground parking garage across the street.
Before Bruce got there, we met Tom, the head dude at The Garage.
As Tom was bringing us over we walked past some really cool vintage aerial photographs hanging on the wall.
One was of the old Beverly Hills Race Track back in the day.
It was a wooden track right at the intersection of Wilshire & Santa Monica.

How nuts is that?!?
Other pictures were of downtown Beverly Hills back in the 20’s & 30’s.
You could actually see the building we were in.
Super cool!
As I’m gawking at the photos a silver-haired gentleman came around the corner, said hi to Tom and introduced himself to us as Peter.
Tom said it was time to head over to The Garage.
But first we had walk across a little outdoor patio and into a big old fire-proof door.

Entering The Garage is a little overwhelming.
It’s not overwhelming like Jay Leno’s garage.
It’s a different kind of overwhelming.
Bruce’s garage is built inside the very first commercial parking garage in the city of Beverly Hills.
The building was built in 1926, Bruce bought it in 1968 and turned it into a candle shop.
But that’s another story for another time.
Walking in thru the big old fire-door you enter The Garage up high so you get a nice overview of the collection.

Wait a second!
I’ve seen that Ferrari before.
That’s the car that was at The Petersen for their re-grand opening in the “Precious Metals” room.
It is a thing of beauty.
It’s a 1957 Ferrari 625/250 TRC Testa Rossa. 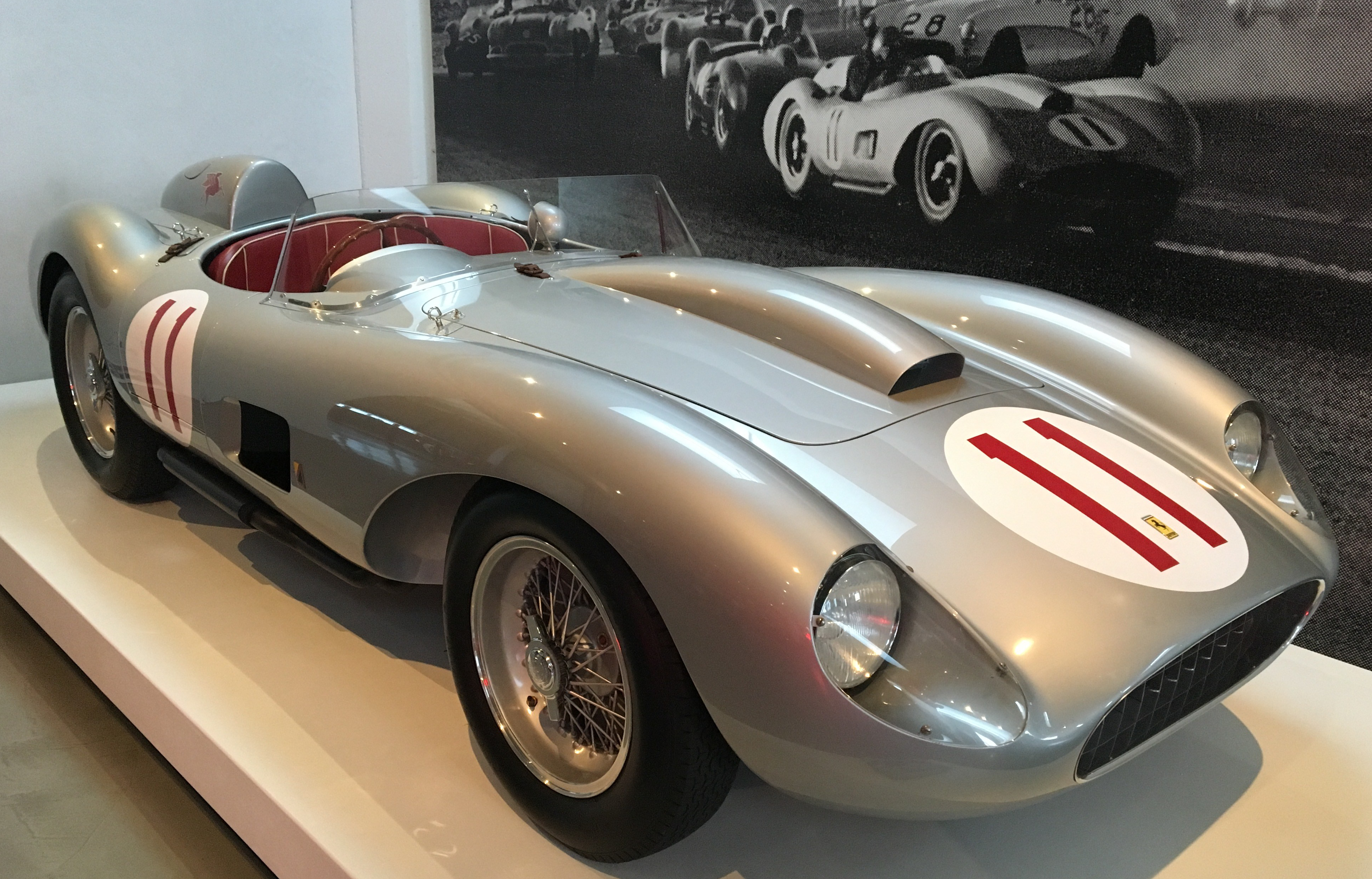 Lemme break it down for ya.
The car was specially ordered by Jon Von Neumann, who was the Ferrari distributor for Southern California.
It’s one of only two cars to leave the factory in Maranello with Ferraris’ 625, 2.5-liter, 4-cylinder Grand Prix engine.
It was raced successfully in 1957, then, in 1958 Ferrari sent Von Neumann one of their new 12-cylinder 250 Testa Rossa engines.
So of course Von Neumann replaced the 4-cylinder with a big 250 Testa Rossa V12.
And the 625/250 was born.
Bruce showed us some pictures of the Ferrari racing with both the 4-cylinder and the 12-cylinder engines.
He told us the way you can tell what’s under the hood is there’s two bumps on the hood with the 4-cylinder engine and one big hood scoop with the V12.
Ferrari even went so far as to contact Bruce and tell him it’s “The Winningest Ferrari Ever.”
Pretty cool huh?
We walk down the stairs, and standing guard in front of the entrance to The Garage floor we’re greeted by a deep black 1929 Bentley 4.5 Liter.
It is gorgeous.
It’s the exact same car as the “Blower Bentley,” but without the blower.
Bruce told us that the un-blown cars were far more successful than the blown ones.

with a Gurney Eagle Ford GT engine in it!!

To the right of the Bentley is a nasty little snake.
It’s a beautiful, liquid black Shelby Cobra.

Yeah… The first production Cobra ever built.
This car was gonna be raced at Le Mans, but the first 75 Cobras had 260 engines in ‘em which proved to be uncompetitive during practice, so the car didn’t race.
CSX2001 was updated with the new 289 engine and modified to full FIA standards by Ford Racing in France.

Its aluminum body, chassis and interior are still in their original unrestored state.
(I’m getting goose-bumps as I write this)

Next to Cobra #1 is a stunning, silver Ferrari.

One of the themes of The Garage is the 24 hours of Le Mans, and this little Ferrari took 3rd overall and won its class in the 1961 running of the 24 Hours of Le Mans.
It’s a 250GT SWB (Short Wheel Base) Comp 61 (Competition Car) and was one of the most successful SWB competition cars.
In 1961 Ferrari built only 18 special 250SWBs to contest the World Constructor’s Championship – and this is one of ‘em. 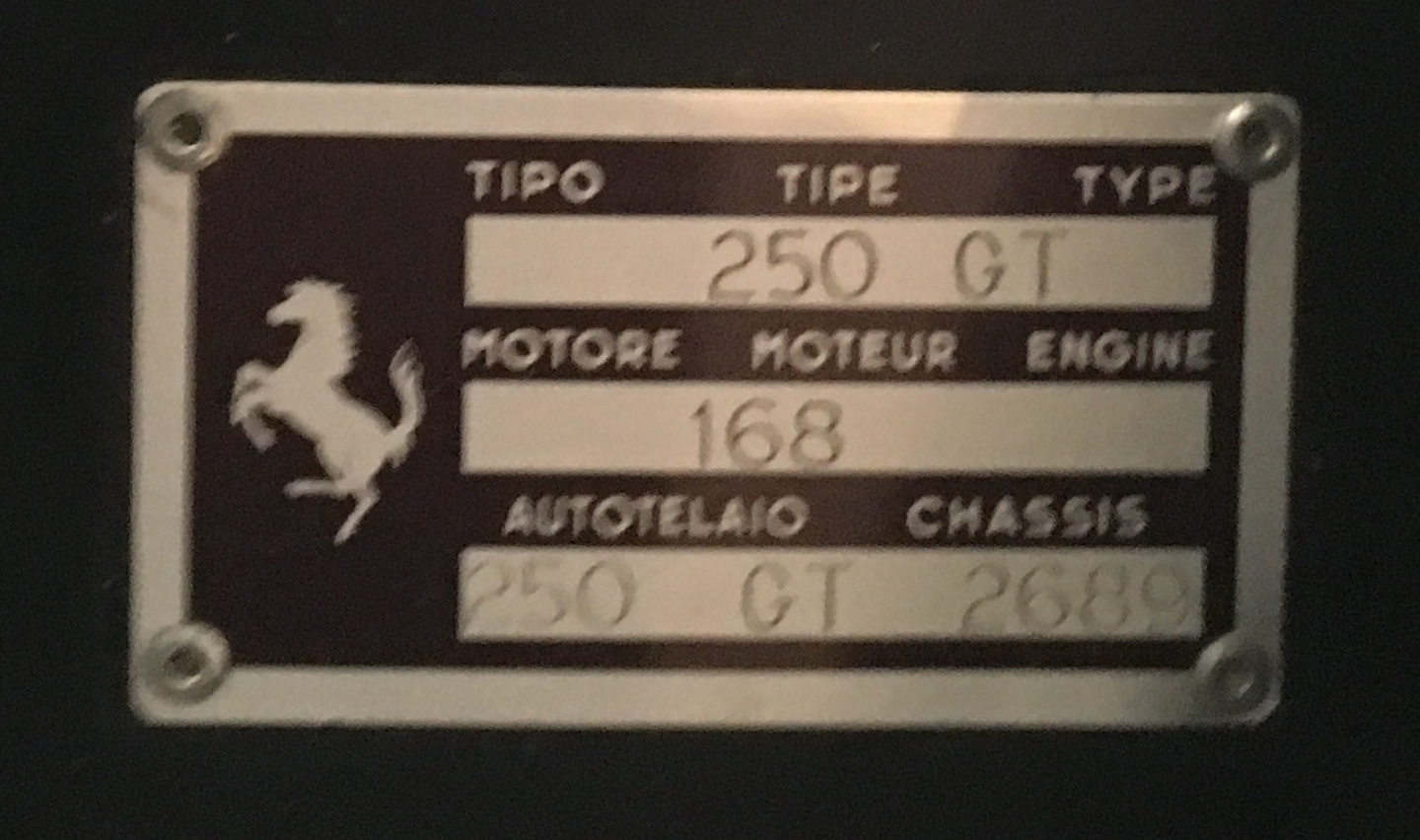 It’s a competition car, so the body is made out of aluminum, which shaves over 200lbs. off of the curb weight.
And it’s not your typical Ferrari Red – it’s a beautiful silver.
Next to the Ferrari is an old Vette.
It’s a 1960 Corvette, with, as you’d expect, a little bit of history.

This car is one of three identical fuel-injected Corvettes entered into Le Mans in 1960 by Briggs Cunningham.
It was the first-time Corvettes had run at Le Mans.
And it took a class win and 8th place overall at the 1960 Le Mans.
The highest finish for a Corvette at Le Mans ever.
After the old Corvette Bruce tells us to follow him.
There’s something we’ve gotta check out.
We walk across the garage to a corner car lift with a little red car sitting on it.

This is the “works entry” by Bizzarrini for the 1965 24 Hours of Le Mans where it placed 9th overall and won its class.
The Iso’s spent over 30 years of its life in the fabled Violati “Maranello Rosso” museum in Italy and its never been crashed.
It’s the most original works racer in existence and was the first A3/C with independent rear suspension and inboard disc brakes.
And, get this, Bruce tells us a few weeks ago they were driving it over the hill when they got a whiff that smelled like something was burning.
They pulled over and saw that the exhaust had set the fiberglass on the rear quarter on fire.
The “Works Entry” Bizzarrini was on fire!
Luckily they had a fire extinguisher with them and an on-board fire system.
But the flames were tucked under the car and not easily accessible.
Then a passing motorist drove by and offered up a couple bottles of water to put out the fire and the Bizzarrini was saved.
Whew!
To me, the coolest thing is that he’s not afraid to drive his cars, no matter how priceless or irreplaceable they may be.
I really admire that.
Under the hood the Bizzarrini has a Corvette-derived 327 with four Weber side draft carburetors on a cross-ram intake manifold.

It is a thing of beauty.
Look how far the engine is set back!
Then I spotted, just sitting there in a corner, next to the Bizzarrini, minding its own business…
A beautiful old Indian circle track racer. 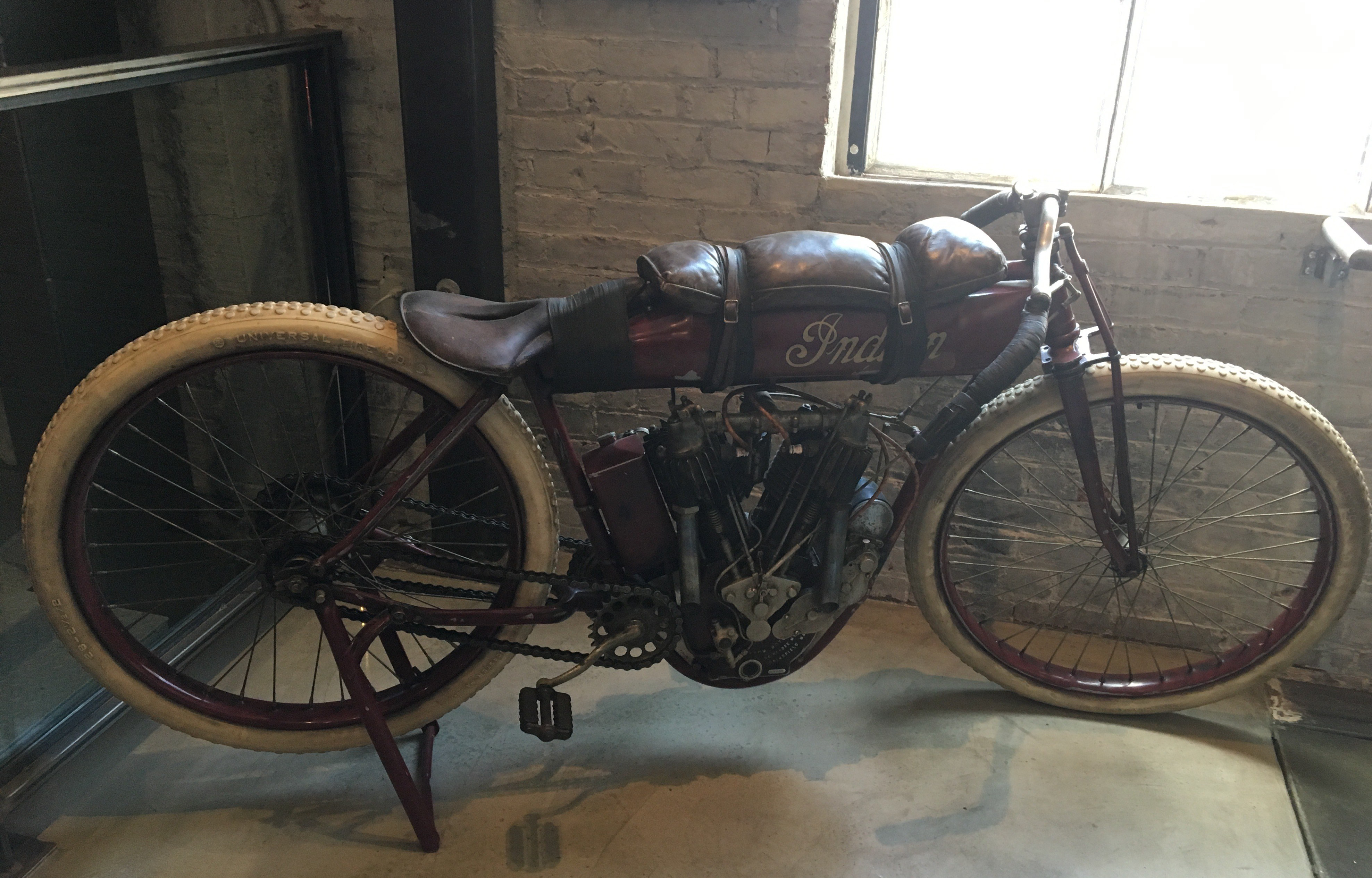 On the other side of the wall of the 1960 Briggs Cunningham Corvette is another Corvette.
This one is the C6R that won the GT1 class at the 2009 running of Le Mans.
And it hasn’t been washed since the race.
It’s  still got Le Mans dirt and oil and racing grime all over it.
Soooooooo Cool!!

Next to the dirty old C6R is an old Mercedes.
It’s Clark Gable’s 1956 300SC Mercedes – one of 48 300SC Cabriolets produced.
And it’s still got his custom fitted luggage in the trunk. Sitting in the middle of the floor, right in front of Clark Gable’s Mercedes, is another Le Mans winner.
This one’s a 1967 Porsche 910 that won it’s class and placed 9th overall in the 1969 24 Hours of Le Mans. 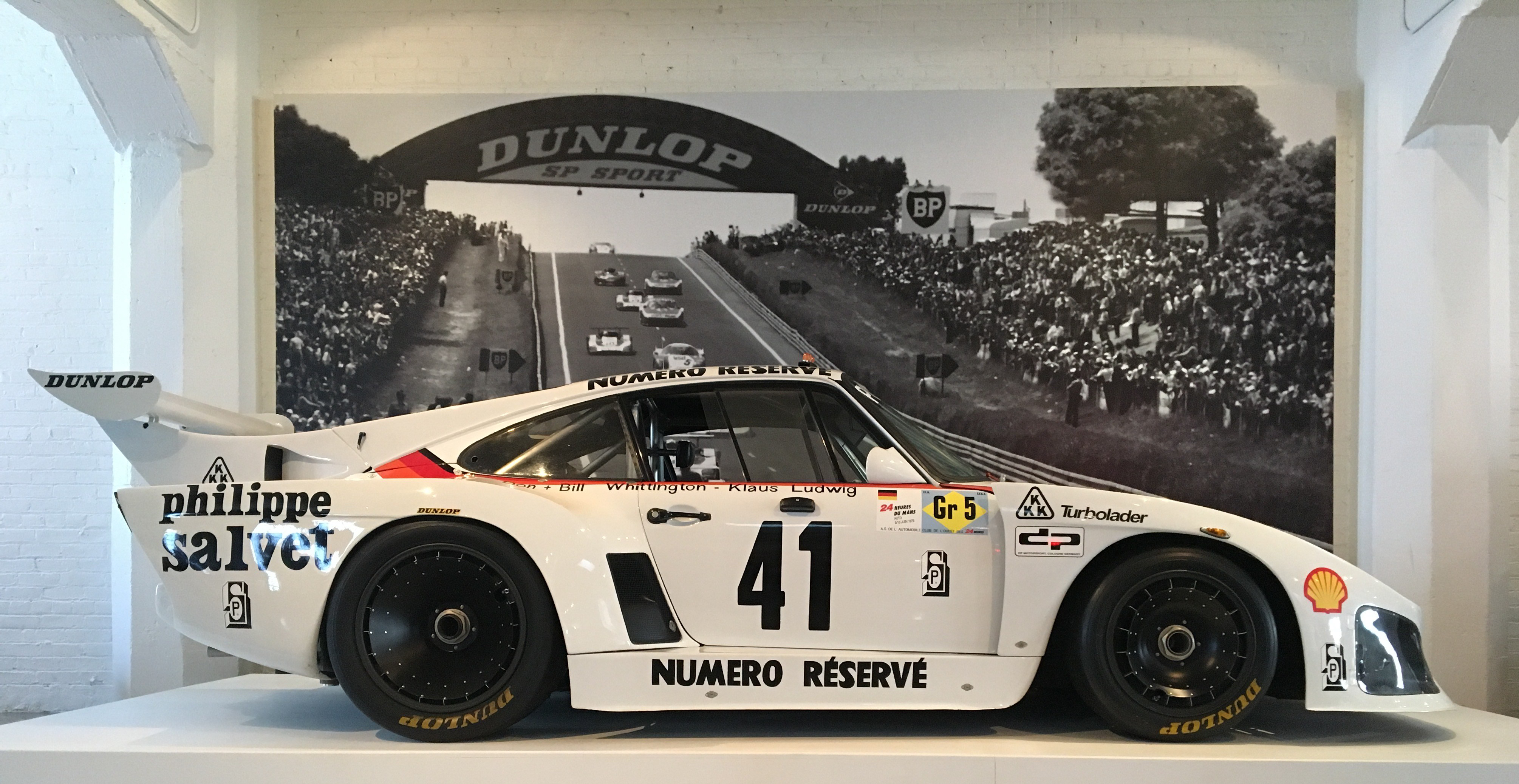 It is considered by some to be the most important 911 Porsche ever.
Eyeballin’ the rear end of the 935 K3 sit his Bonneville racer.
One of the cars he’s been over 200mph in.
Yeah… He’s also a member of the 200mph Club.

He’s also got a bunch of super cool motorcycles that I know nothing about.

Built by hot rod legend Alex Xydias out of a World War II surplus belly-tank off of a Lockheed P-38.
The Edelbrock Equipped So-Cal Speedster was the fastest unblown flathead powered car in the history of Bonneville and even graced the January 1949 cover of Hot Rod Magazine.
The Pierson Brother’s 1934 Ford So-Cal Speed Shop Coupe was also a Hot Rod Magazine cover car on the April 1950 issue.

The Greer, Black & Prudhomme dragster, which won 230 of the 237 races in which it competed.

My buddy Mike told me these plexiglass covers were to keep the spark-plugs from shooting out of the heads during a pass. 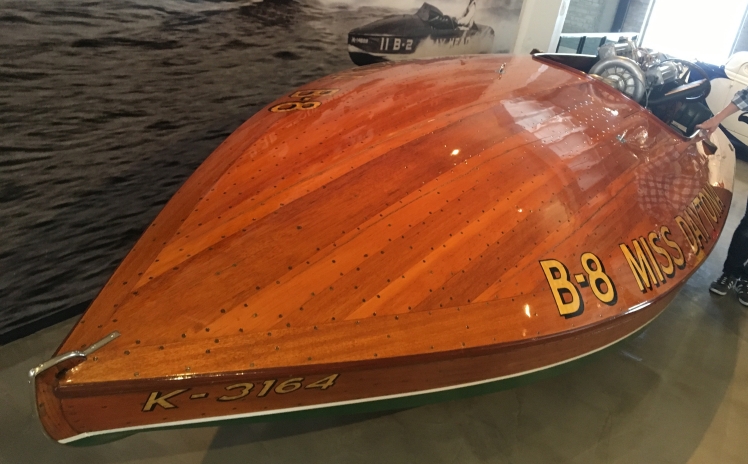 We all ended up next to the “Mini Ferrari GTO.”
The Alfa Romero TZ and…
Wait a second.
Did he just ask him something about designing The Daytona?
I’d been kind of hearing whisperings of Corvette Sting Rays and Daytona Cobra’s, but I was too enthralled with the cars to really pay attention to the others conversation.
Hold on a moment.
Did he just ask about designing The Corvette Sting Ray?
It took me a while…
But it finally hit me.
The guy who introduced himself as “Peter” when we first got there was Peter Brock.
The same Peter Brock who designed The Corvette Sting Ray and The Shelby Daytona Coupe.

Duuuuuuuuuuuude!!
Not only am I in Bruce Meyer’s garage, but I’m here with Peter Brock!
What a day!
Thanks to Jeff Schwartz for the introduction.
And thank you Bruce Meyer.

You are a class act.

One thought on “Bruce Meyer’s Garage”