I’m getting The 55 ready to go to Phoenix in a couple of weeks.
I’m going to meet Kyle and Bam who I know from the Hot Rod Power Tour.
They’re righteous dudes.
They’ll be in the Prestone big-rig with a caravan of cars following them out to LA.
All to celebrate Prestone’s 90th anniversary.
It kicks off at The Petersen Automotive Museum then we head over to the LA Auto Show.
It’s gonna be pretty cool.
The Ring Brothers Pantera and their new AMX Javelin “Defiant” will both be there.
The 55 was selected to be one of the cars in the rally and on display in “The Garage Powered by Prestone” during the 2017 LA Auto Show so I’m thrilled.
I’ll be driving the heck outta The 55 from LA to Phoenix and back, so I’ve gotta keep it maintained.
And I go prepared.
After I got back from driving it to SEMA someone asked me what do I carry in The 55 “just in case.”
You asked for it – you got it – here’s exactly what lives in The 55 everywhere we go.
When you open up the super-secret stash compartment Lucky made and you’ll see it’s stuffed to the brim.
On top is The Cross, some car rags, work gloves, the Weego battery charger and a tire plug kit.  (You can read about the Weego in the link)

Under that stuff is my neatly organized mess of goodies…

Starting in the lower left corner is a bottle of Wilwood brake fluid wrapped up in another car rag.
Above the brake fluid are a couple cans of Fix-a-Flat. 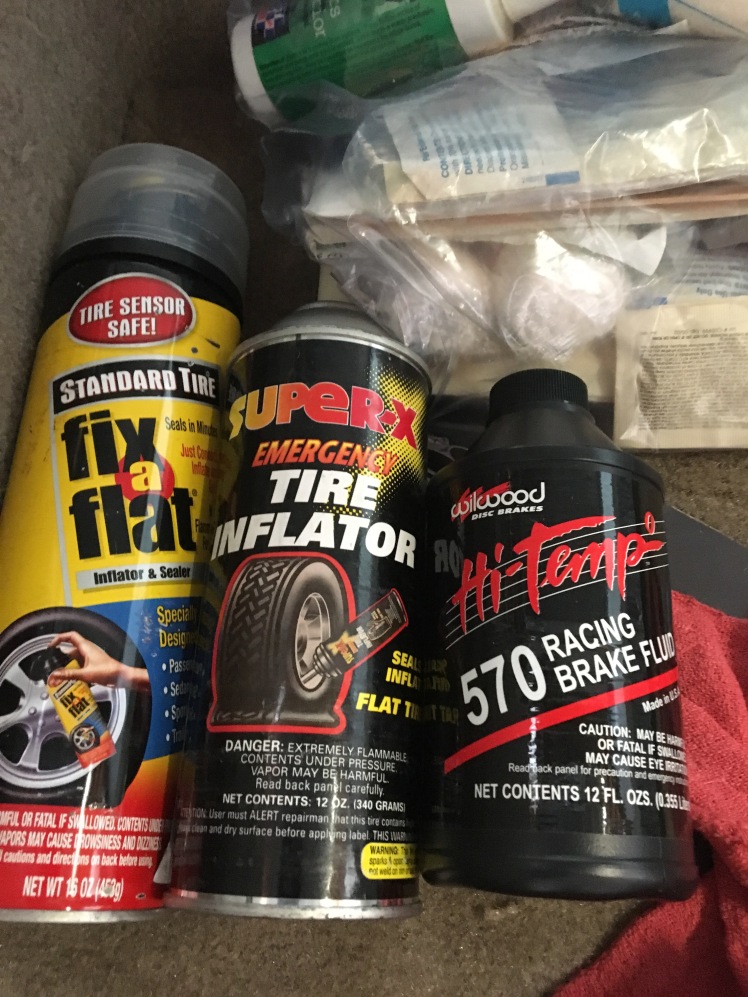 I’ve always carried two just in case one isn’t enough.
Especially when I’m not carrying a spare.
Then there’s some assorted bungies, a funnel, and spare V-belts.
I’ve got one of each size of the V-belts I need for The 55: the alternator, power steering and air conditioning.

Then there’s some roadside flares and an umbrella.
Oh yeah!
And a spare windshield wiper blade.
They say it never rains in Southern California right?
Well, one night years ago, I was heading home from a friends place in the Valley and it started to pour.
I turned on the windshield wipers and, I not making this up, the passenger side wiper just flew off the arm!
What the heck?!?
I had to limp it home with one wiper.
Which was no easy task.
The windshield wipers on a 1955 Chevy aren’t very big or very effective.
The next morning I called up I-5 Chevy Parts and had Scott set me up with a new set of wiper blades and now I keep the old one stashed away “just in case” something like that happens again.
In the black bag are my jumper-cables.
Yeah, I know I’m carrying the Weego portable battery charger, but what if that’s dead?
I’ve got my trusty jumper cables.

Then I’ve got an old toiletry bag that I use to put some tools in.
There’s a Snap-On ratcheting screwdriver I got from Dakota Digital on the HRPT, a driver, extensions, combination wrenches, a C-wrench, regular and needle-nose pliers and some screwdrivers and an xacto knife.
And that’s just in one side.

Then another ziplock bag filled with some first-aid stuff.

And hiding away in plain sight is my tire pressure gauge. 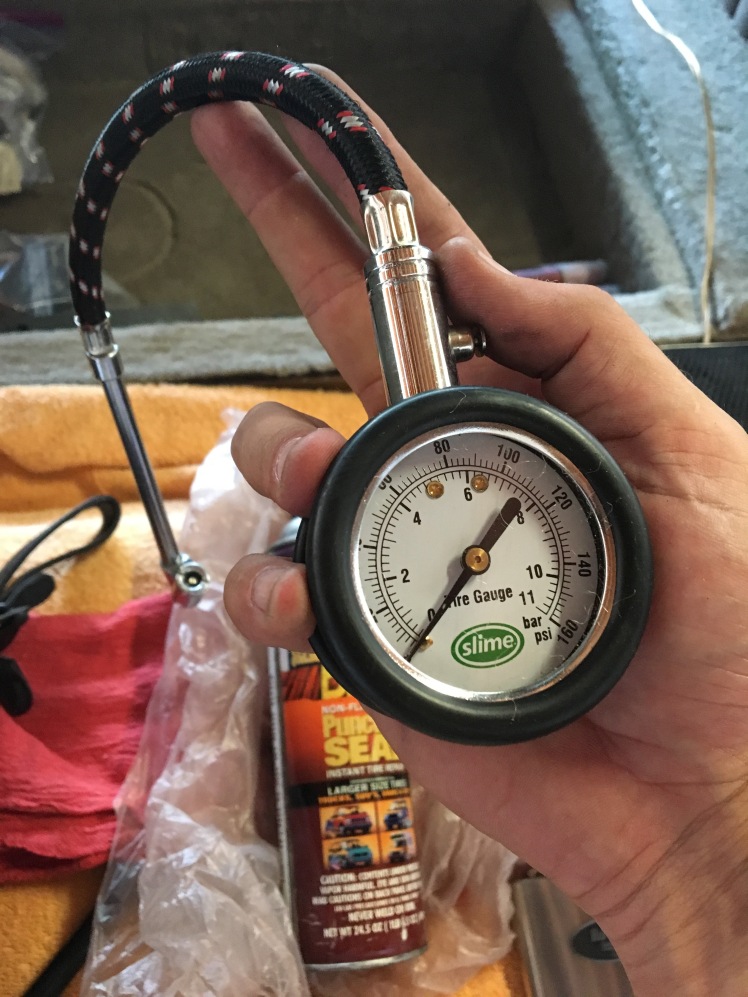 Then, in case all else fails.
I got this lifesaver from my buddy Rich Fields when we worked on The Price is Right.
It’s always full and ready for a real emergency – when we’re waiting on a tow-truck.

So that’s what I carry in The 55.
Wadda ya think?
Is there anything I left out that needs to go in?
Be sure to leave it in the comments.
And thanks for reading.

One thought on “The 55’s Daily Carry”