The Guanella Pass Scenic Byway is another one of those Scenic Byways that’s been on my list for awhile.
From the Evergreen Parkway I took the Lariat Loop Scenic Byway around Evergreen Lake and made a right at the stop light onto CO-73 and headed towards Conifer.
At Conifer I got on Highway 285 west towards Fairplay.
Just like if we were going to the good old Bucksnort Saloon.
I took 285 thru Pine Junction and down the hill into Bailey.
Pop and I turned off in Bailey a few weeks ago when we drove to Wellington Lake.
That was when I saw first this sign. 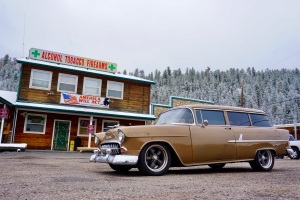 What is it the American people love most?
Alcohol, Tobacco and Firearms.
This is a place where you can get all three in one stop.
If they had nachos I don’t think I’d ever leave.
But they were closed, so I got back on 285 and kept on heading west.
I had heard a rumor about a hot dog stand just outside of Bailey.
As I was going around a bend in the road I saw it!
A giant hot dog.

The rumors were true!
The Coney Island Hot Dog Stand is on the left side of 285 – if you’re heading towards Fairplay.
I pulled off and after I crossed the bridge I saw there was a long cable stretched out across the parking lot with a sign that read: “No Trespassing.”
But the cable wasn’t locked.
I unhooked the cable so I could pull The 55 in front of the building for a quick picture.
But before I could snap a shot a guy came out and started telling me that I was trespassing on private property and by removing the cable I was in violation of a legally binding contract.
Woah…
I apologized and tried to explain that I just wanted a picture and I’d be on my way.
He must deal with that kind of stuff all the time.
The Coney Island Hot Dog Stand has been called “the best example of roadside architecture in the state.”
I’ll be honest – it’s pretty cool.
It was originally built in 1966 on Colfax Avenue and called The Boardwalk at Coney Island.
It closed in 1969.
In 1970 the new owner moved it to Aspen Park – 17 miles down the road.
And in 2006 it moved again to its current location.
After I got my shots, I reattached the parking lot cable and got back on 285 towards heading towards Grant.
When I got to Grant I made a right onto County Road 62 – the Guanella Pass Scenic Byway.

Grant is at 8,606 – the Guanella Pass summit is at 11,669 and Georgetown is at 8,530.
3000 vertical feet in 24 miles in a 1955 Chevy.
Giddy up!
The record for earliest snowfall in Colorado is September 3rd.
This year it snowed on September 8th.
The temperature went from two months above 90 degrees to 27 overnight.
Ya gotta love Colorado.

I’m glad I was prepared – I had my Vintage Air heater keeping me warm.
And I had my Continental Tire Extreme Contact DWS06’s at all four-corners and my Wilwood front disc brakes to keep things under control.
The drive up the Guanella Pass Scenic Byway was beautiful.
The aspens were just starting to change their colors and there was a light dusting of snow over everything.
And best of all – there was no one else on the road.
After a whole lot of switchbacks, at 11,500 we broke thru timberline and into a winter-wonderland.

At the top and at the bottom of Guanella Pass there are some pretty sweet switchbacks.
I got a couple of those right-handers just right and it felt like we were floating down the mountain.
We made it into Georgetown without any drama.

Georgetown has tons of history and lots cool old buildings.
I had to stop at the Buckley Garage.

The original building was built in 1877 and it’s now on the National Register of Historical Places.
It started out as a blacksmithing and horseshoeing business and in the 1950’s it was a Dodge dealership.
I love all the history of places like this.
From Georgetown, I took I-70 into Idaho Springs and stopped by the Majestic Art Gallery to say hi to my Pop who was working there that day.
From Idaho Springs the Evergreen exit is only about 10 miles down the road.
I completed the circle from Evergreen to Conifer to Grant to Georgetown and back into Evergreen in the snow and in under four hours.
It was a good day and a great little road-trip.
Thanks for coming along with me.
I hope to see you out on the road.
#idrivea55