I’ll never forget my first trip to The Nethercutt museum.
It March 3rd 2012.
The day Grumpy died.
I was invited to go to The Nethercutt by Ken Ladka, the President of The Motion Picture Car Club.
I’d read about The Nethercutt in AutoWeek Magazine as one of those museums that if you’re a car-guy, you have to go.
The picture I remember from that article had three huge imposing cars surrounded by marble columns and crystal chandeliers.
It looked like a real museum.
Pretty swanky.
I called up my buddy Arthur and asked him if he wanted to check it out.
Arthur was the director of the AutoTrader/Wheels-TV new car video reviews that I’d been doing and he’s a car-guy too.
He met me at my place and from there we took my 1969 Corvette convertible.
As we made our way around the parking lot in the Corvette I was temporarily blinded by the suns reflection off of a huge metal monstrosity sitting behind the building.
Upon further inspection I see it’s a train with a Pullman car hooked up behind it.
I had to go check out the train.
Sitting outside in all of its glory is a 1937 Canadian Pacific Royal Hudson Steam Locomotive with a custom built private Pullman car riding behind it.
The thing is huge.
I love the art-deco design and the almost endless front end.
It looks like a big tall-boy beer can with wheels, or something an evil master-mind would ride around in while he plots to take over the world.
It’s a beautiful piece of machinery.

After the train we go into the building next to where we parked.
It’s huge inside with easily over 100 cars.
Sitting directly to the left of the door we walked in is a Bugatti.
A multiple concourse winning 1931 Bugatti Type 51 Coupe. 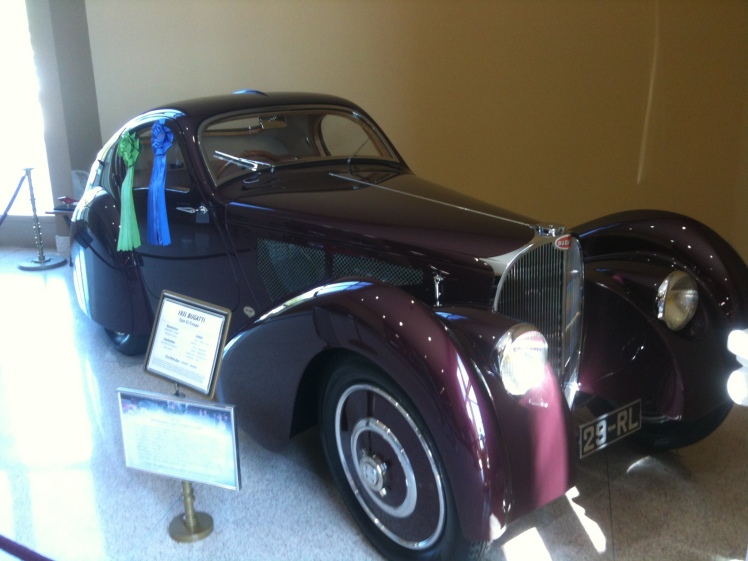 Sweet.
Across from the Bugatti is an stunning little 1937 Talbot-Lago Type 150 C-SS/Sport Coupe.
The car was a wedding gift for the fourth wife of an Indian prince, and is the only coupe of the 14 built with fully skirted front and rear aluminum fenders, all aluminum body, a sunroof and painted – not chromed – wheels.
This is also one of only two Talbot-Lagos with the hood ornament in the shape of a crown, testifying to the cars Royal Indian heritage.
Wow.

An imposing 1930 Rolls Royce Phantom II Brewster Town Car sits next to a slick black L29 Cord – the world’s first production front-wheel drive automobile.
This is one of only three produced with a long wheelbase.
So many cars and so little time.
By the time I got to the Tucker it was time to go on our tour. 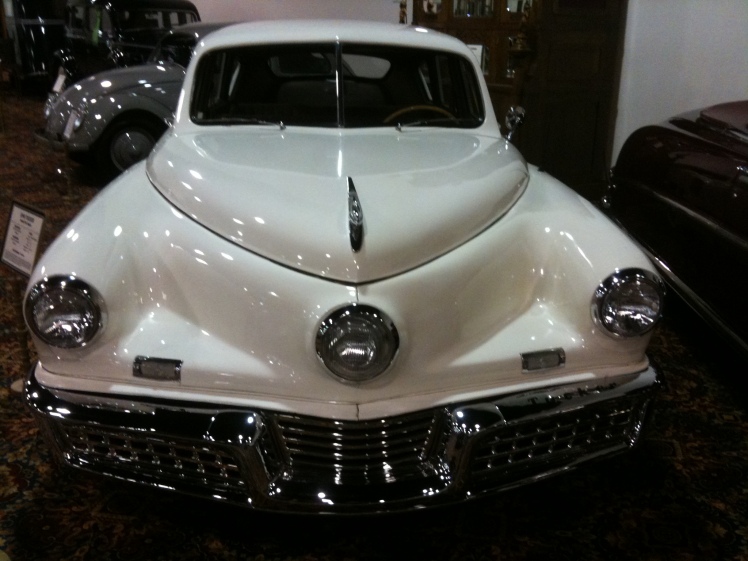 We left the building we were in and went across the street and downstairs to the basement.
We entered a huge room with about 25 cars and learned that we weren’t in the basement, we were in the Lower Salon.
Oh-La-La!!
The cars are surrounded by nickelodeons, music boxes, dolls, doll houses and crystal figurines.
Pretty cool.
I fell in love with the little red 1955 Austin Healy.
It’s a rare Model 100M LeMans Roadster.
Austin called it the “100” because it was able to break the 100mph barrier.
Check out the leather strap across the hood.
It’s an actual LeMans-specification leather strap to keep the hood from flying off.
And it’s windshield is almost horizontal.

After the Lower Salon we were invited up to the Grand Salon.
Holy Moly!
The Grand Salon is where the picture I remembered from AutoWeek was taken.
It’s got marble floors, marble columns, chandeliers and painted ceilings.
It is a Grand Salon indeed.
There’re about 30 cars on display and they’re all works of art.

On the left a 1932 Maybach Zeppelin DS8 / Convertible Sedan.
It’s massive V-12 engine was designed by Count Ferdinand Von Zeppelin of air-ship fame.
It’s a beast.
As I was looking at the Zeppelin, I called Arthur over to check it out.
“Check it out… Zeppelin dude!”
An older gentleman heard me and came over and asked: “Do you know what you’re looking at?”
I said: “Zeppelin, dude!”
He said: “No no no. Not Led Zeppelin.”
To which I responded: “Zeppelin Duuuude!!!!”
He walked away shaking his head while Arthur and giggled our asses off.
Next to the Zeppelin and center stage was the 1933 Dusenberg Model SJ Arlington Torpedo Sedan.
Widely known as “Twenty Grand” as that was it’s selling price when new in 1933.
This supercharged Dusenberg was displayed at Chicago’s World Fair of 1933-34 and is considered by many to be one of the most beautiful Dusenbergs built.
If you wanna see “Twenty Grand” in person, you’re gonna have to head over to The Petersen on Wilshire & Fairfax.
It’s currently on display in their “Precious Metals” gallery.
And then the 1934 Packard 1108 / Twelve Convertible Sedan on the right.
Three huge imposing cars surrounded by marble columns and crystal chandeliers.
It didn’t look like any car museum I’d ever seen before.
The whole room was spectacular.
Then my cell phone rang…
It was my cousin Denny calling me to let me know that our family patriarch, my grandfather: “Grumpy,” had just passed away.
I went from elated to devastated in that moment.
As a kid I couldn’t pronounce Grampy… so I called him Grumpy, and the name stuck.
The stubborn old bastard held on until he was 98 years old.
Much like a lot of the cars at The Nethercutt Collection, Grumpy was old and stubborn.
But unlike the cars, Grumpy couldn’t be restored…

The collection was started by J.B. Nethercutt & his wife Dorothy.
The cars are obviously the stars of The Nethercutt, but that’s not all there is to see.
There’s a fantastic collection of mechanical musical instruments, 19th Century French Furniture and a huge assortment of Radiator Hood Ornaments & Motometers.
The collection includes cars from the Antique Era: 1890’s-1915, the Vintage Era: 1916-1924, the Classic Era: 1925-1948, and the Post-War Era: 1945-1970’s.
The Nethercutt’s cars have won the Pebble Beach Concours d’Elegance six times – more than any other individual.
It’s just north of LA and it’s open to the public…
But if you wanna go to The Nethercutt, you’d better make a reservation.

2 thoughts on “The Nethercutt”