It’s amazing the difference a new set of tires can make.
I used think that tires are tires.
If I got a set of 245/50R17 in Brand X they’d feel the same as a set of 245/50R17 in Brand Y, right??
I mean, with the exception of the really high performance tires, I kinda thought they all rode the same.
Man was I wrong.
The 55 was about ready for some new tires, so last year during the Hot Rod Power Tour I started asking around to see what tires people liked for their hot rods and why.
When it comes right down to it, it’s kinda like the Chevy vs. Ford vs. Dodge rivalry.
Everyone’s got their favorite.
Some people just get the cheapest set of tires they can afford regardless of brand.
Some are brand loyal, and others toil over what exact sizes are gonna make their car look the best.
Wheel and tire combos can completely change the look of your car.
Sometimes not for the best…
The first day of the Power Tour I met one of the presenters for Comp Cams: Emily Williams.
She was wearing Van’s hi-top skate shoes, so I thought she had to be ok.
Then she tells me that she and her husband put a 408 stroker into her 05 GTO named Roxy.
What?!?
I thought she was just another pretty car show girl, but she’s actually a model/mechanic.
She recommended I check out Continental Tires – the official tire of the Hot Rod Power Tour.
Oh yeah…
Why didn’t I think of that?
The guys at Continental were super cool.
They asked me what I was doing with the car and when I told em it was for my daily driven 1955 Chevy station wagon they unanimously said for me to get a performance all season tire.
After all, I’m not gonna be doing any auto-crossing in the 55.
Well… at least not until I get a Roadster Shop, Art Morrison or Schwatrz Performance frame under it.
When I got back from the HRPT the search was on for which tires to get.
At ContinentalTires.com I narrowed it down to two types of tires: the Extreme Contact DW which is a premium ultra-high performance tire and the Pure Contact which is a good all-around all-season tire.
I emailed Continental and told ’em I was going with the Pure Contacts.
They said good choice and asked me where I wanted them shipped to.
I had them sent up to Da Rod Shop in Simi Valley where we shot Rods ‘n Wheels.
The 55 was due for an oil change so I could kill two birds with one stone at Da Rod Shop.
Put on the new tires and change my oil.
After Steve called me and said the tires had arrived, I called up America’s Tires to make an appointment.
Da Rod Shop is about 100 yards away from America’s Tire – very convenient.
When I arrived the tires were sitting in front of the counter in all of their glory.

I made an appointment for 8am – first in, first out.
America’s Tire had all four tires mounted, balanced and me out the door and back at Da Rod Shop to change my oil by 8:50am.
Niiiiiiiiiiiiice. 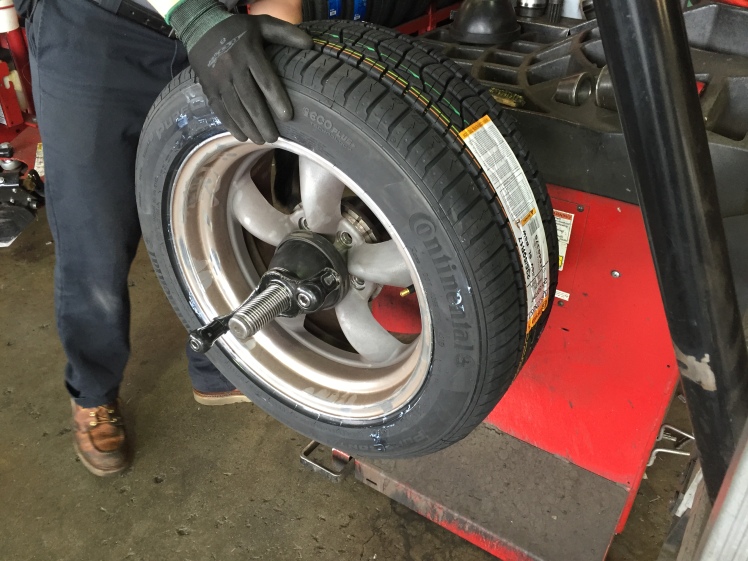 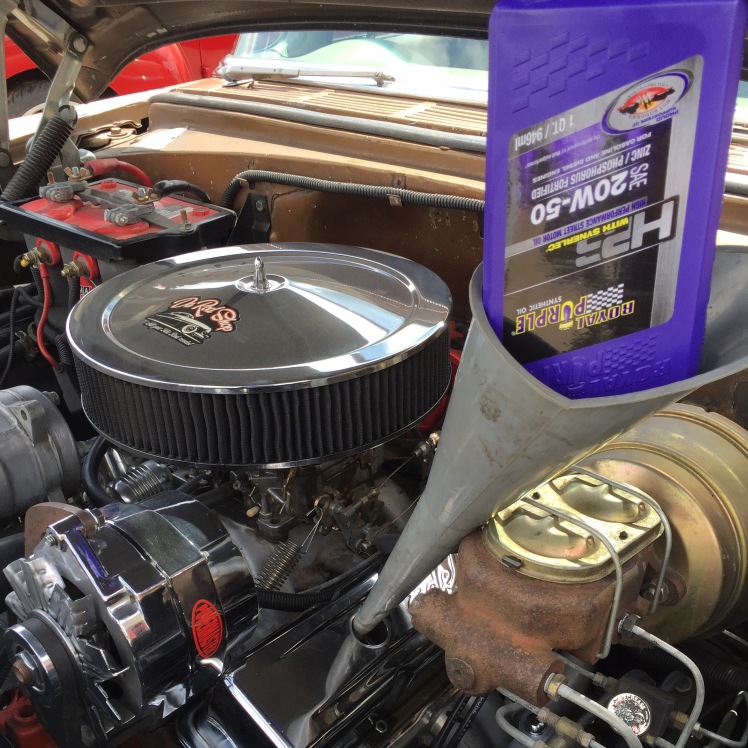 Alright.
I commiserated with the guys for a while, and stuck around for lunch.
What could I do.
Steve bought pizza…
I had to have a slice… or three.
I got outta there so early I decided to take the 55 on a little drive.
I’d heard of the Angeles Crest Highway – Highway 2, but I’d never heard of the Angeles Forest Highway.
It connects Glendale and the Angeles Crest Highway to the 14 freeway close to Palmdale.
When I first got on the 118 I immediately noticed a difference in the ride quality of the 55.
The new Continental Pure Contacts were super smooth and quiet.
There was way less road noise than I’d been used to.
And they rode a whole lot smoother than the old tires.
Alright… time to enjoy the ride.
I took the 118 to the 5 to the 14 and drove towards Palmdale.
When I saw the sign that read Angeles Forest Highway I knew I’d made it.
A couple of miles after exiting the 14 we entered the Angeles National Forrest. 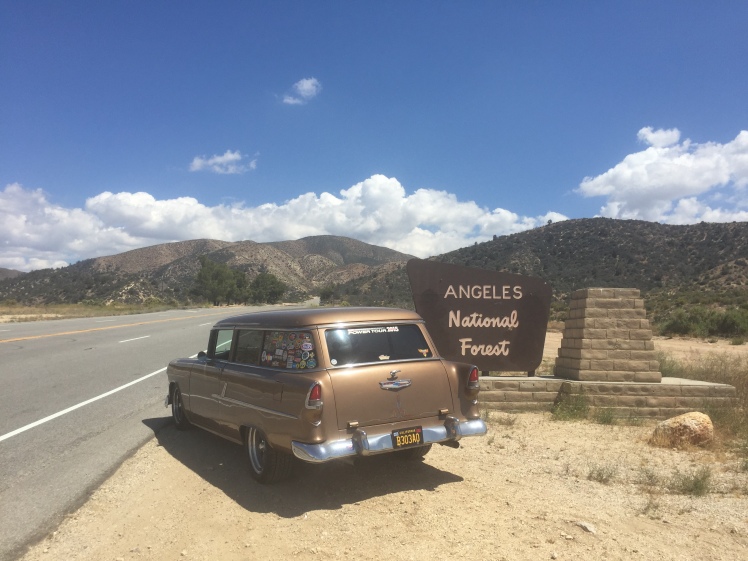 The Angeles Forest Highway goes from the high desert up thru the San Gabriel mountains and drops you back down into Glendale.
It’s a super nice, scenic road.
And I noticed that traffic on it going south bound was almost non-existent.
I’m usually the kind of driver that likes to get there in a hurry.
Today I was there to enjoy the ride.
I took it nice and slow.
I took in the scenery.
And when another car came up behind me, I pulled over and let them pass.
I had new tires and fresh oil, it was a beautiful day and I had nowhere to be.
Here’s a few of my favorites from the drive.
The Singing Springs Tunnel. 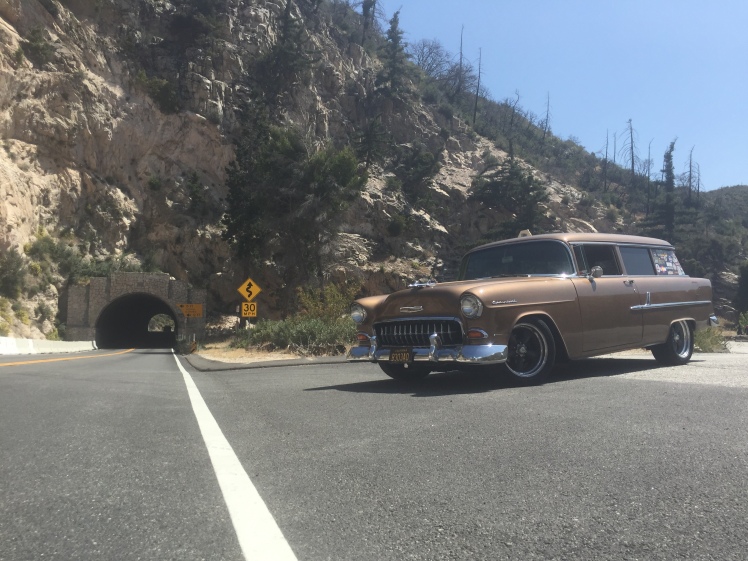 If you look closely, you can see the 55 parked on the far right in the turn-out after the bridge.
The highest point on the Angeles Forest Highway is only 4,910 ft. so it’s a nice gentle drive.
And the scenery is beautiful.
You can still see evidence where the Station Fire of 2009 scarred the forest.
There are burnt trees everywhere.
Sadly the Hidden Springs Cafe was also lost in the fire.
I just realized that now I’ve wearing Continental across the board.
I’ve got Continental Tire tread on my Adidas shoes, Continental Tires on my mountain bike and now I’ve got the 55 wearing Continental Tires too.
The new Continentals ride great and I’m looking forward to many miles on the road with ’em. 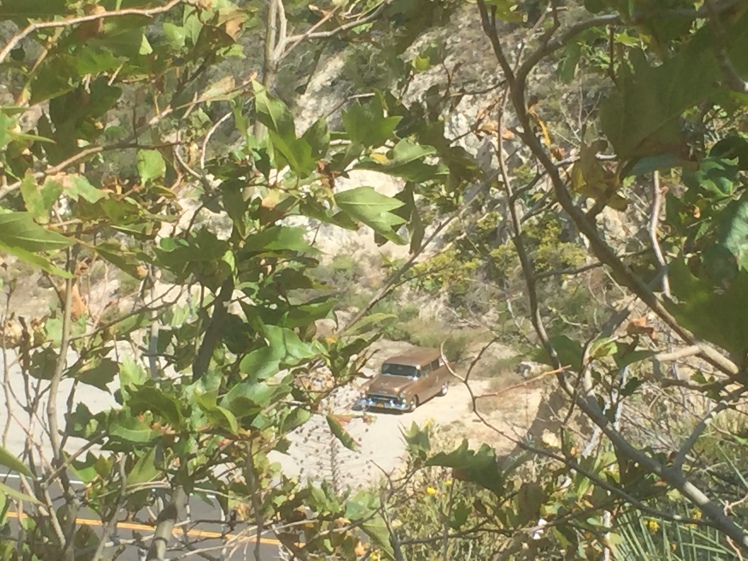