Earlier this year I went over to the Hot Rod Magazine offices to pick up some missing issues.
While I was there, I saw a super tuff 66 Chevelle sitting there in the parking lot.
I took some pictures and posted ‘em up on Instagram, FaceBook & Twitter.

A little while later a friend of mine: @theautoarcheologist told me the car belonged to: @moblietechlucky from @hotrodgarageshow.
It’s called the #Chevhell
So I tagged Lucky and followed him.
That’s the way I roll.
Last year a friend of mine introduced me to this guy who had an old MasterCraft ski boat he wanted to restore – John Horton: @ballofspray.
I’ve always loved the old MasterCraft Stars ‘n Stripes graphics, and I thought it’d be pretty cool to do an old boat with a modern LS drivetrain in it.
John and I had been talking for months but we’d never met in person.
As luck would have it, just before I left for the Hot Rod Power Tour the rear binding in my waterski ripped.
I texted John to see if he could get me a deal on a set of Radar boots.
“Done. Lemme know when you’re back.” Was his response.
Sweet.
On our way to the Hot Rod Power Tour, CB and I were in the DFW airport and we happened to run into Lucky – the guy with the Chevelle.
I was slowly putting names and faces together.
I got to hang out with Lucky on the Hot Rod Power Tour and learned he’s not only a super nice guy with a very capable Chevelle but he was also on a few seasons of “Overhaulin’.”
As soon as I got back I got a text from John reading: “Your boots are in. You want me to mail ‘em or you wanna pick ‘em up?”
I decided it was about time to put another name and face together.
So I called up Joey and told him we were skiing on a private lake next week.
He was in.
Next week as we turned off the freeway I realized we weren’t in Kansas anymore, we were in the middle of miles and miles of fields.
Welcome to California’s Central Valley.
We drove a few miles, made a left, drove a few more miles and made another left.
I knew we were close when I saw a waterski billboard.
Then we saw it.
Joey and I had made it.
It was an oasis in the middle of acres and acres of fields. 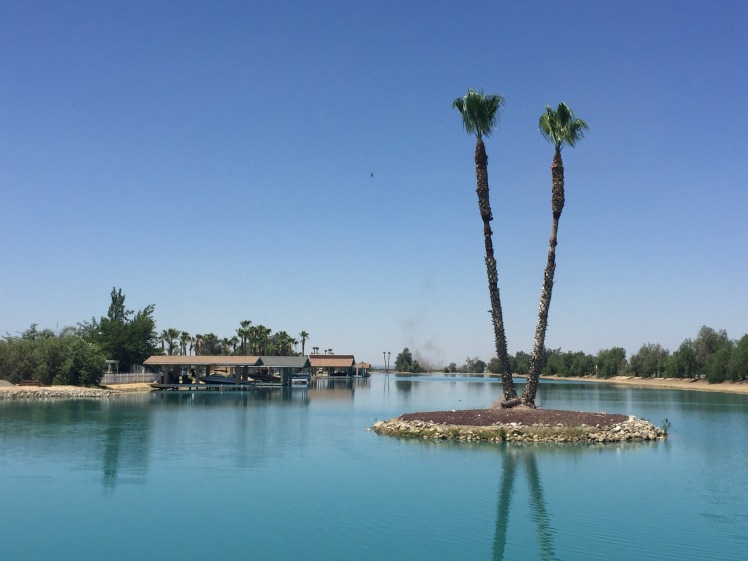 John wasn’t there yet.
He told me to head out to the back patio, uncover the sofa and make ourselves at home.
We walked out to the back yard and there’s a new Ski Centurion Carbon edition suspended on a boat lift.
It’s sitting over the bluest of blue water and in the shade under its own garage.
Wow.

As I was taking it all in that’s when I first noticed the truck.
It was an old pickup truck parked way off to the side in a pile of branches about 100 yards away.
I made a mental note to check out the old truck, but I had to ski first.
After John shows up we get to work switching out my bindings, but not before he gets a good laugh at my ski and compares it to my 1955 Chevy.
Then his neighbor Bob comes over and joins John and Joey in making fun of my old ski.
At some point while we’re comparing old skis and old cars John says something along the lines of:
“We’ve got an old truck if you want it.”
What?!?
Seriously!?!
But I don’t have any place to park it…
Wait a second.
You’re giving me a truck?
John told me they wanted it out of there.
Just come and pick it up and it’s yours.
And then my mind started racing.
Oh the possibilities.
Then it was time to ski.
The water was warm and butter soft.
The ski course at Lake Elsinore hasn’t been up since the lake is so low, so it was my first time in a course in a few years.
It may not have been pretty, but I made a full pass of 15 off at 34mph.
Lots of improvements to be made, but that’s another story.
After everyone else got their sets in, and while everyone else took a break for lunch, I snuck over to check out the old truck.
It was a 1966 Chevy ¾ ton step-side long-bed.
And it had been sitting for a long time. 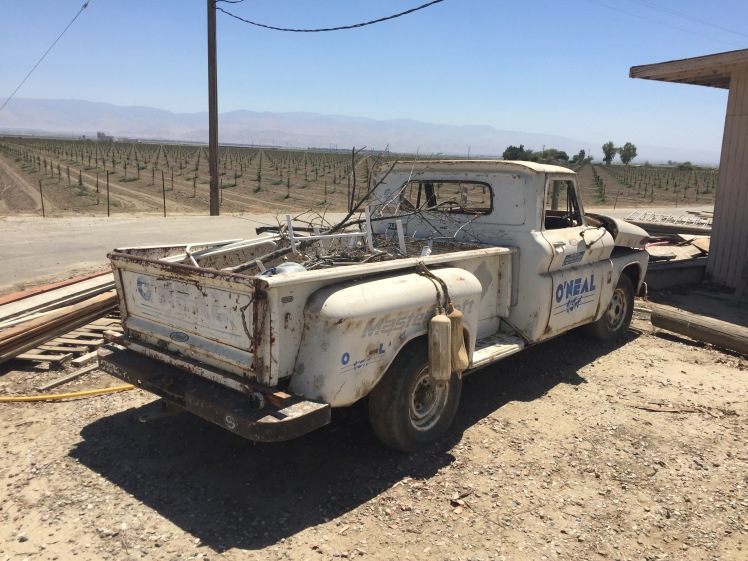 I took a bunch of pictures and texted them to a couple of friends and posted ‘em up on Instagram. 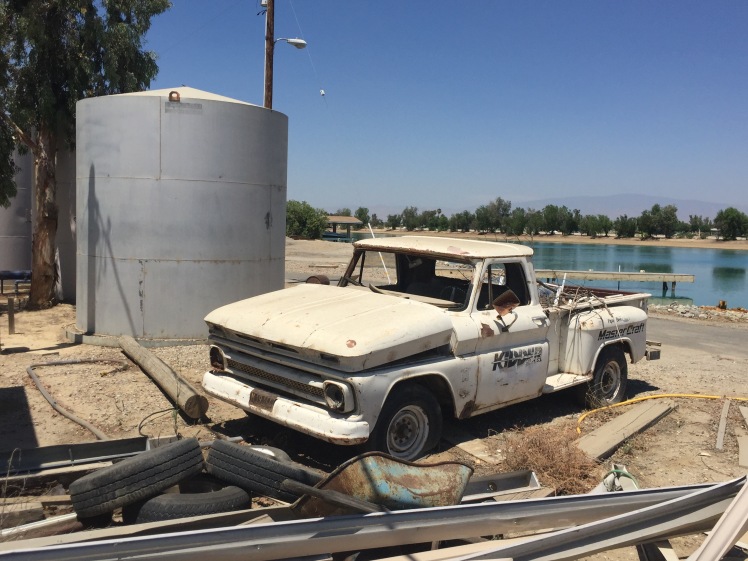 On the way home I saw that John had even called me out:

The next day I had planned to go over and see Lucky and have him fine tune the AC in the 55.
While I was there he asked me what was up with the old truck I posted yesterday.
I told him: “It’s a 66 Chevy, ¾ ton, step-side, short-bed with a straight-6 and it’s rough. Do you have a place to put it?”
Lucky told me he’d been looking for months for a new shop truck.
I told him since he was helping me with my AC I’d give him the truck.
We just gotta go pick it up.
After working his magic my AC was blowing colder than ever and I was on my way.
Later that day I got a text from Lucky reading that he’d reserved a rental truck and trailer and was ready to pick up the truck whenever I was.
After coordinating our schedules with John’s, I met Lucky at his shop early in the morning, got in the rental truck and we proceeded north.
It turns out the rental truck he got was a 2015 GMC Sierra.
I’m a product specialist for Chevrolet and I was gonna get some real world experience on how this thing drives and tows.
The GMC drove like a champ with the trailer bouncing along behind us all the way up there.
Once we arrived we realized the 66 was a long bed not a short bed like I thought.
And to add insult to injury the trailer didn’t have a winch and we didn’t have a tow-strap.
Which wasn’t so bad until we saw that the truck needed air in two of its four tires and we didn’t have an air compressor.
Good thing we came prepared.
Thank goodness water-skiers are really good people and John really wanted this truck outta there.
He told us the people who could help us were all on the boat out on the lake, but they’d be done shortly, so hang tight and watch the show.
The skier was ripping 35 off passes.
It was a good show.
It’s also a good show to watch ‘em drive the boat into the slip, hit a button on their remote and the whole boat lift out of the water.
Pretty cool!
John’s next door neighbor Bob got out of the boat and said he had an air compressor and extension cord we could use to air up the trucks tires, and the guy driving the boat said he’d be right back with a tow strap.
John was right – the guys on the boat got us what we needed.

Once we got air in the tires we hooked the tow-strap to the trailer and the back of the truck.
While Lucky got the slack out of the tow-strap I just had to steer the front end of the truck and make sure we didn’t swing wide and go into the lake… Or hit the tree.
But it didn’t want to steer.
Turns out there was a piece of cement that had fallen and jammed itself into the steering box preventing it from turning.
Lucky pulled out the hunk of cement and the 66 was free at last.
By then we had drawn a crowd of onlookers.
And by a crowd I mean John, Bob and their friend Roger.
It took us three tries but we got it up far enough were we could latch it onto the trailer.
From there John hooked up his truck to the 66 and gently pulled it the last few inches.

It was on the trailer and we were ready to head back to LA.
On the way back to LA the trailer limited us to about 57mph before it started to sway back and forth behind us, quickly and effectively reminding us it was back there and who was the boss.
I think the coolest thing about the GMC rental truck was with the tow mode engaged the transmission would downshift on its own to slow everything down at different shift points.
Pretty cool.
We got to the shop and emptied the bed of the truck of old lawn furniture, beer bottles, fish carcasses and a whole lotta other trash before we pushed it off of the trailer and into its new home.
We picked up the 66 on a Sunday.
After I got done waterskiing on Monday I got a notification that I’d been tagged on Instagram.
When I opened it up it was Lucky.
He got the 66 running and dubbed it the #Lakeside66
Wow!!
And I just saw he had it running under its own power – no brakes – but it moves under its own power after sitting for who knows how many years.
I’m looking forward to seeing what the future holds for the #Lakeside66

Kinda cool that thru the power of social media I could help out one new friend by getting rid of some an eye-sore  and help out another new friend with something they’d been looking for.
See… one man’s trash really is another man’s treasure.
This just in:  Lucky just texted me and told me while he was going thru the truck yesterday he found some paperwork saying it’s a 1964…
So… #Lakeside64
Be sure to follow us on Instagram for all the updates on the #Lakeside64 at @mobiletechlucky & @jeffthisted
And thanks again for reading.