I got off the plane from hosting the Hot Rod Power Tour, got my bag, Ubered it home, passed out, woke up and went straight to the Rodeo Drive Concourse d’Elegance.
That’s how much I like cars.
I parked the 55 down the street and before I even made it onto Rodeo Drive I spied a Bugatti Veyron just kicking it on Wilshire Blvd.

With a 16-cylinder engine and four turbochargers producing over 1000hp the Veyron was once the pinnacle of the supercar world.
Here at the Rodeo Drive Concourse d’Elegance, it’s just relegated to street duty.
The Hot Rod Power Tour has almost every type of Hot Rod you can imagine driving city to city.
The cars are living and breathing and running out on the open road just like God had intended.
The Rodeo Drive Concourse d’Elegance is a whole different animal.
It’s got almost every type of heavy metal you can imagine, but they’re all trapped behind their velvet roped cages.
These cars aren’t left parked unguarded in hotel parking lots, they’re locked away in climate controlled vaults under lock and key.
And they’re not so much even heavy metal anymore, now they’re lightweight carbon fiber.
Speaking of carbon fiber the Pagani Huyara BC is about as exotic as they get.
Pagani is blend of Italian passion and German engineering. 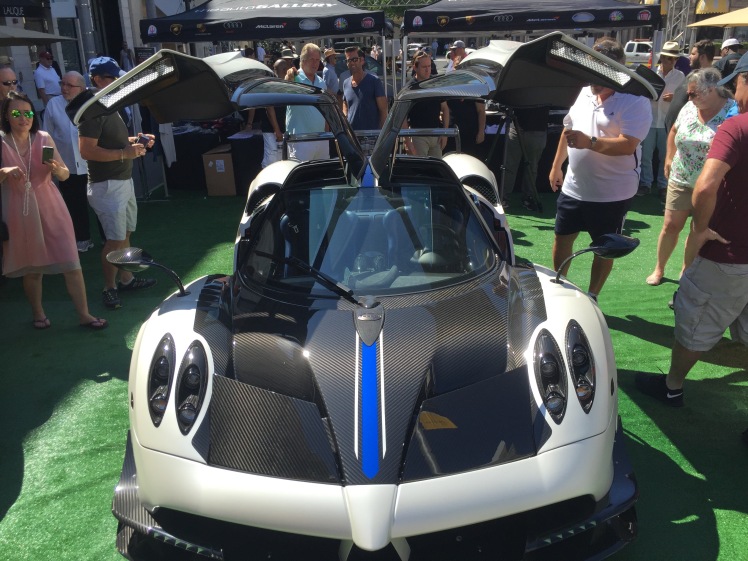 With active aerodynamics, a carbon fiber titanium tub, carbon fiber body, titanium exhaust, twin-turbo V-12 with over 700hp and a curb weight of under 3000lbs…
The Huyara BC is the new king of the hypercar exotics.
One block up Dayton I see another Veyron, and again it’s parked on the street, not a part of the concourse.

Then I was hit by a stampede of prancing horses.
Ferrari had a 30 year evolution of each of their supercars out in all of their glory starting with their latest hypercar a 2015 La Ferrari:

It’s Ferraris first foray into hybrid cars, but they’re no stranger to hybrid technology.
Ferrari’s been using a Kinetic Energy Recovery System (KERS) in their F1 cars for years and this is a detuned version of that.
So the LaFerrari has a streetable KERS that’s almost the same Sebastian Vettles’.
Coooooool.
Then the 2003 Enzo.
Named after Enzo Ferrari – il Commendatore – was their top dog from 2002-2004.
With a curb weight of 3,009lbs, a 660hp V-12 and the looks of a Formula-1 race car the Enzo is a rolling work of art. 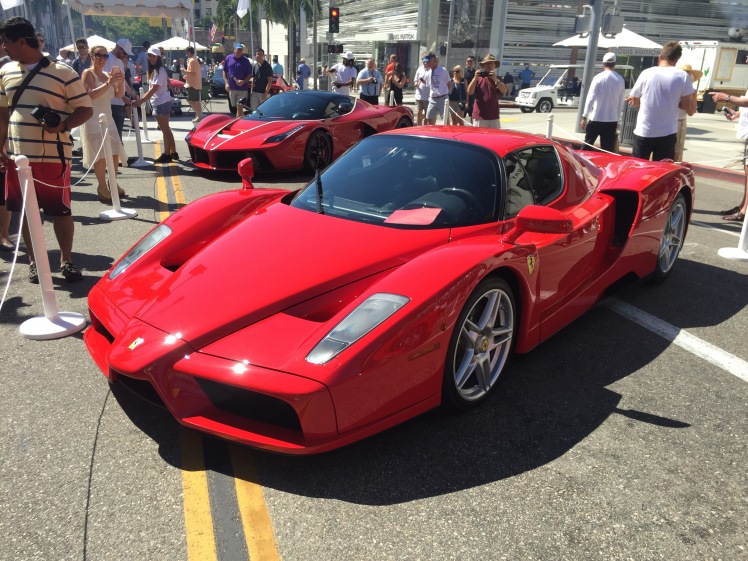 Ferrari developed the F50 based off of the F50 GT that was built to compete in GT1-class racing.
The F50 is two-door, two seat roadster with a removable hardtop and a naturally aspirated V12 engine out of the 333 SP.
It was a street legal race car

The F40 is still a purists dream and was designed to celebrate Ferrari’s 40th anniversary and was the last Ferrari personally approved by Enzo Ferrari.
At the time the F40 was the fastest, most powerful and most expensive car Ferrari had  ever sold to the public. 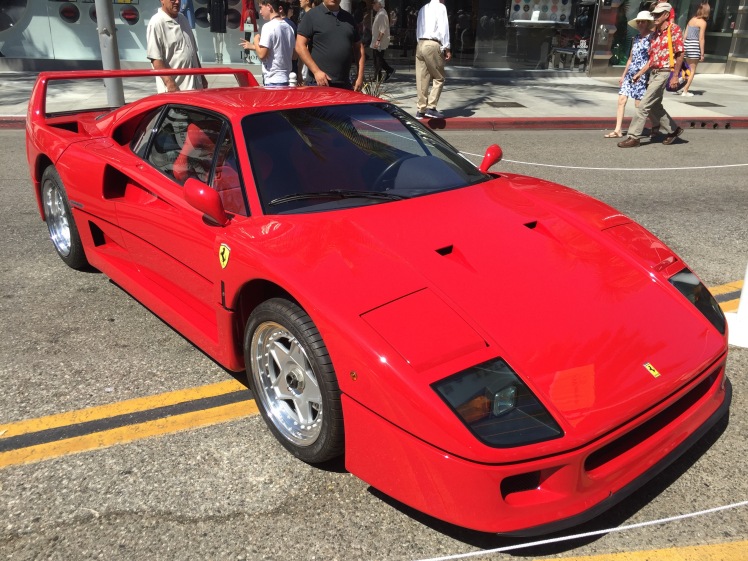 And the classic 1985 288 GTO.
Most people think this is a run of the mill 308 GTB.
But it’s not.
It was built to compete in the new FIA Group B Race series, but the FIA disestablished the class so all 272 288 GTOs were sold purely as road cars. 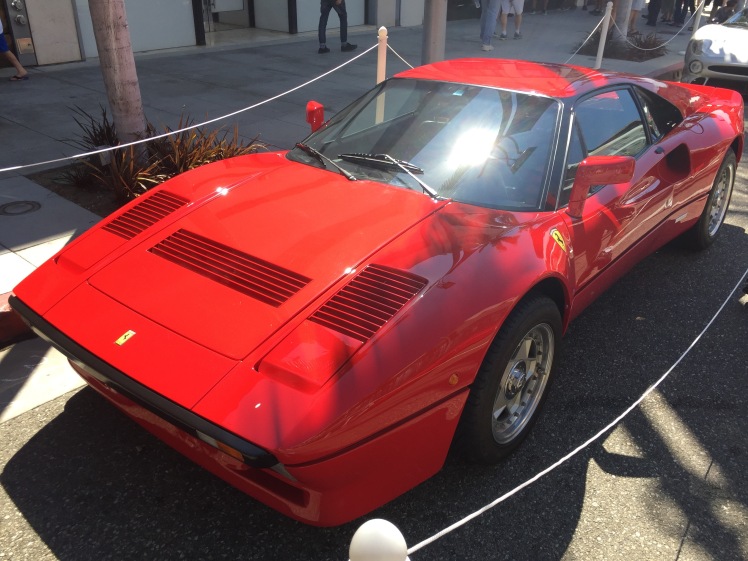 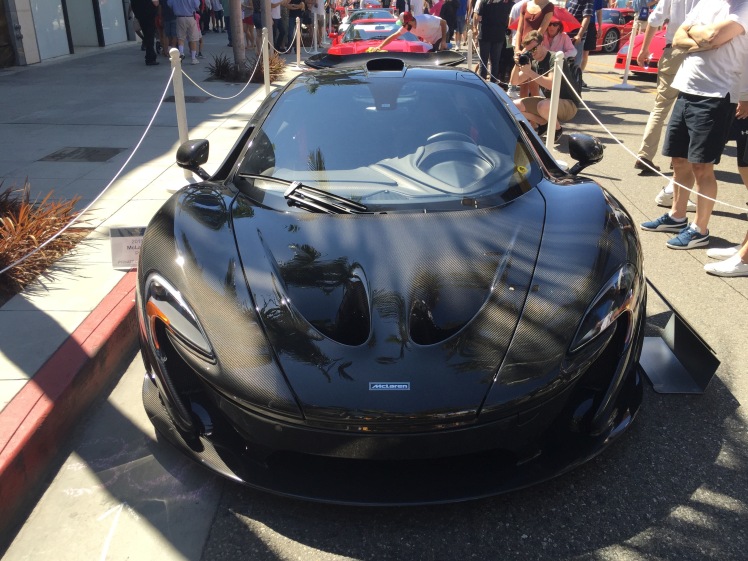 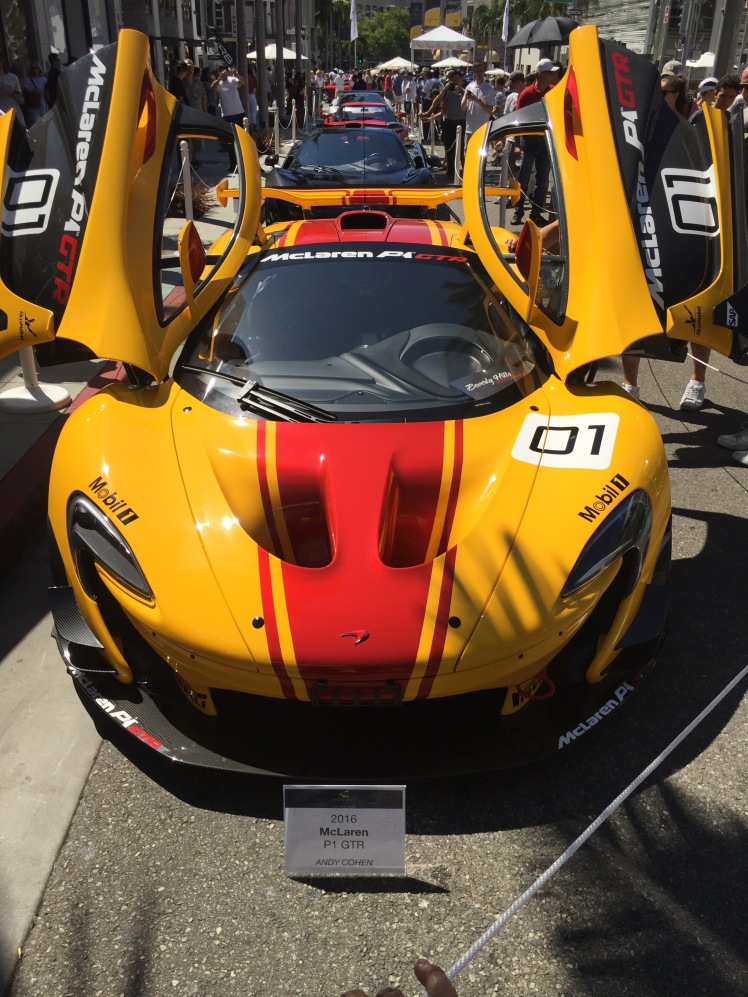 And just when I thought the nose to tail couldn’t be outdone, the Rodeo Drive Concourse d’Elegance out did themselves with back to back snakes.
An elegant 1965 289 and a brutal 1966 427 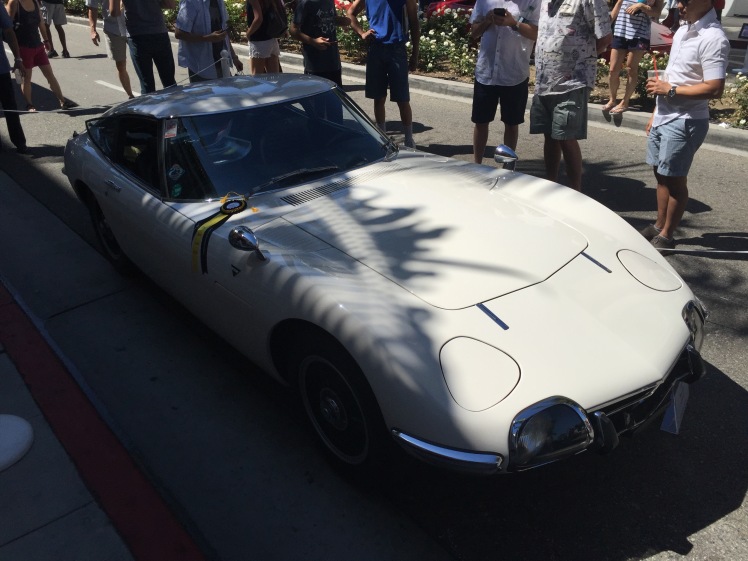 And another Veyron.
Only this time it was in the show! 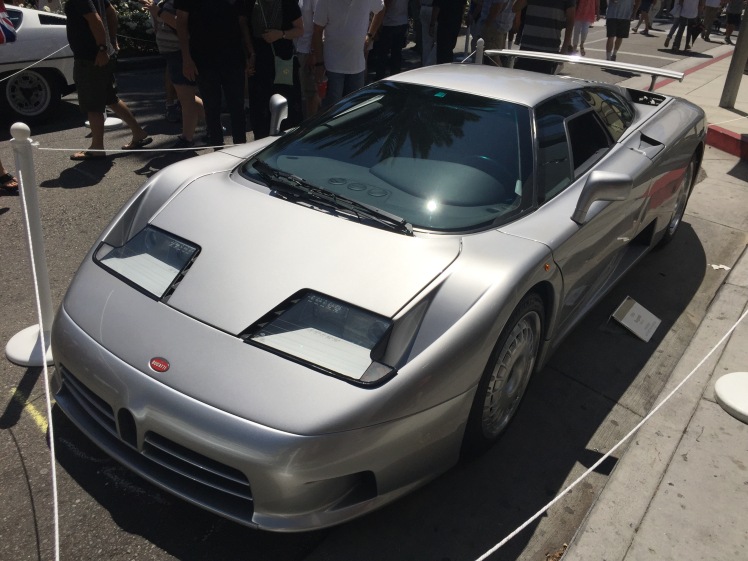 I was Bugattied out.
You Bugatti be kidding me!! (Sorry… I couldn’t resist.)
In front of a Porsche 918 hypercar 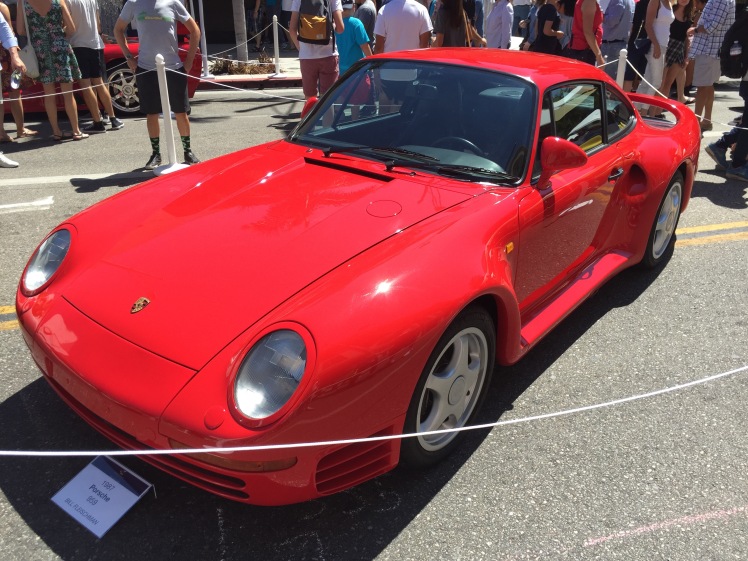 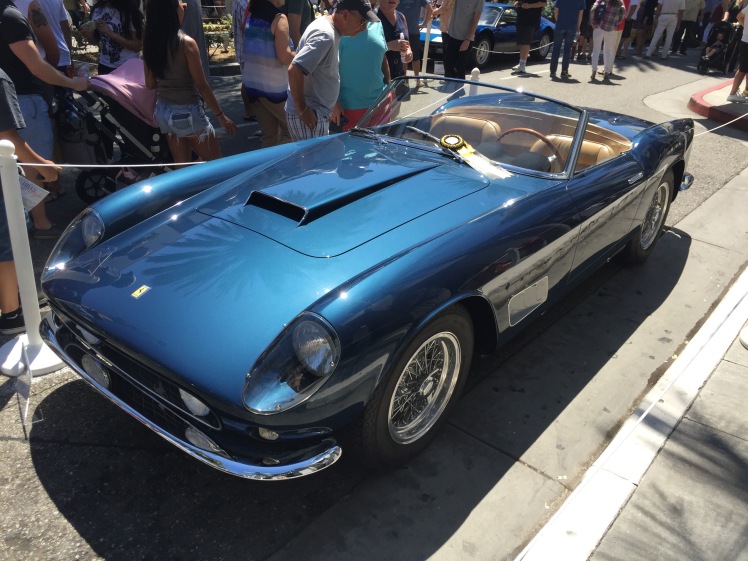 As I was standing in the shade I got called out.
“Did you just get off the plane from Kansas and come straight here?”
It was Chris from RackPak who was with us on the Hot Rod Power Tour.
It turns out he’s a car nut too.
And he’s a docent at The Petersen.
He asked me if I had seen Steve McQueen’s Jaguar.
I told him I saw it at the grand re-opening back in December.
He told me they drove it over to the Concourse this morning.
Steve McQueen’s Jaguar is one of the crown jewels of The Petersen and they drove it here.
It’s a 1956 Jaguar XKSS – the road going version of the Jaguar D-type – and it’s one of just 16 built. 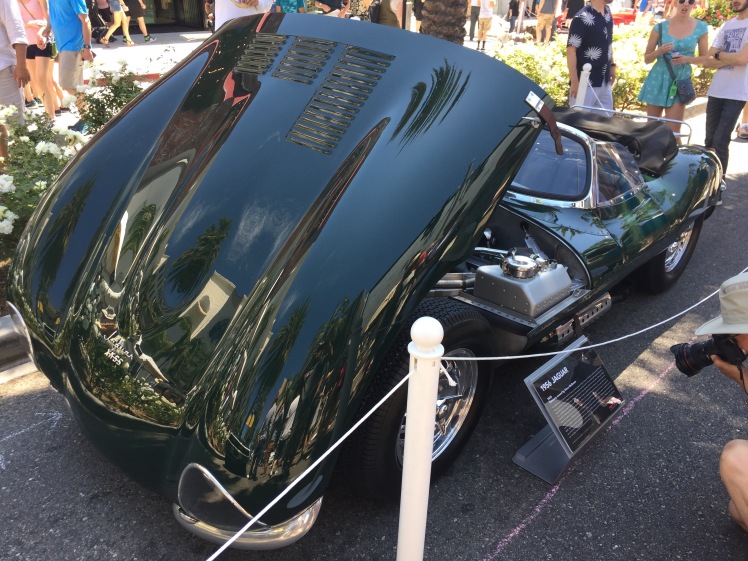 He liked driving it fast and is reported to received so many tickets that his driver’s license was almost suspended twice during his first year of ownership.
Unique to this XKSS is a custom glovebox.
The XKSS didn’t have a glovebox, McQueen asked hot rod artist Von Dutch to custom fit a glovebox in the car so he’d have a place to put his sunglasses.

I love cars.
All shapes and sizes.
And the Rodeo Drive Concourse d’Elegance did not disappoint.
Looking forward to it next year.
Hope to see you there.