It’s 6:30am and the 405 is a parking lot.
I shoulda left earlier…
But now I get to spend more time in The 55.
I’ve gotta gig at the Goodguys 32nd West Coast Nationals up in Pleasanton about 350 miles north of LA and about an hour east of San Francisco.
Instead of flying I drove The 55.
And I thought I’d hit some more National Parks and get the most out of my America the Beautiful pass before it expires.
We finally get moving and five-minutes later I hear a strange noise coming out of the passenger side front wheel.
I pull over to the shoulder and stop and the noise goes away.
As I start to pull forward there it is again.
Awwwwwww man.
It’s always something…
But at least it’s here in town and not out in the middle of no where.
I limp it off of the freeway and onto the closest safe side street and I call AAA.
Four hours later they arrive.
When we get to my buddies shop the tow truck driver says he found a button-head bolt laying next to the passenger side front wheel.
After a little inspection it turns out some of the bolts holding the rotor to the hub were a little loose.
Doh!!
After everything was tightened up I was on my way.
Even with the delay we made it up to Sequoia National Park just in time to catch some good light.

My one goal in Sequoia was to get a picture of The 55 driving thru a tree. 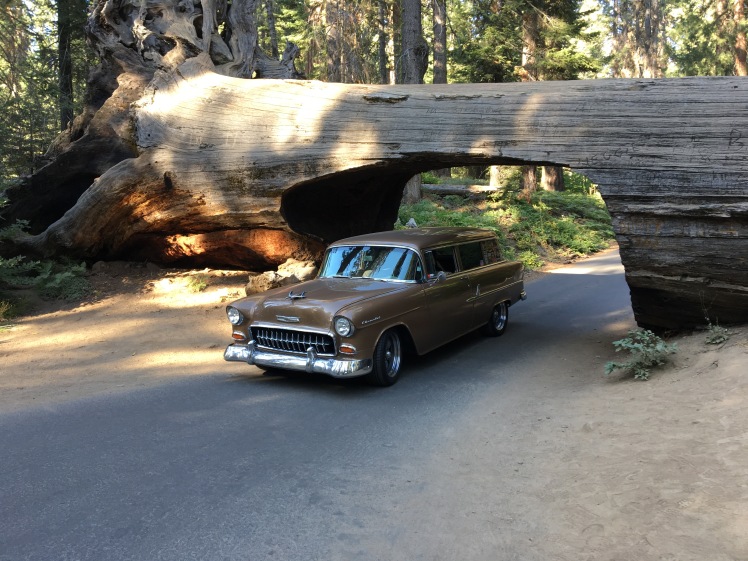 Look at the size of that thing!

Check out the fine layer of dust on The 55.
That’s there is road dirt.
I Got to Sequoia but didn’t make it to King’s Canyon because I wasn’t sure how many miles I had left in my tank so I made a left and drove down to Fresno.
Coming down Highway 180 I was treated to a spectacular California sunset.
The sun had that soft orange “Miller Time” glow.
I didn’t stop to take a picture, I just took it all in and enjoyed the view.
As I came rolling off the highway I heard some grinding from my driver’s side front wheel just as i came to a stop.
This time the noise was coming from the drivers side.
What the heck?!?
I got out to take a look and the driver’s side rotor was all scarred up on the outside.
Great.
I felt the inside of the rotor and it was smooth.
Since the sun had just set I made the decision to spend the night in Fresno.
The next morning, instead of going up to Yosemite, I drove straight up to my hotel in Pleasanton where I called around to a few hot rod shops.
They all said the same thing:
“Oh no. No ones gonna carry Wilwood brakes here. We’re gonna have to special order ’em.”
Hmmmmmmmm…
I knew Wilwood would be set up at the West Coast Nationals so I called my buddy Mike who works there and asked him what to do.
He told me to go see Kaleb and Ryan at the their display tomorrow morning.
The next morning I went over to Wilwood and realized that I met Kaleb at Hot August Nights in Reno a few weeks ago.
It’s a small world after all.
Kaleb tells me to bring The 55 over to them after I’m done announcing the autocross.
Good news!
Apparently one of the drivers side brake pads had worn down to the metal and thats what was making the grinding sound.
They swapped out my brake pads, took care of everything that needed taking care of and sent me on my way.

They wouldn’t accept any money saying: “It’s an honor to work on a car like this.”
They even told me how to properly set in my new brake pads.
If you can’t tell – I’m a little overwhelmed.
I mean – who does that?!?
That’s the definition of real customer service!!
And those are the kind of people that are part of my car-family.
After seating-in the new pads, The 55 is back in business!
The cars at The Goodguys shows are always nice, but I had no idea this show is the Big Daddy of all the Goodguys shows across the country.
I’ve never seen so many flawless paint-jobs in one place.
In the hotel parking lot I saw another wagon so I had to park next to it.

A beautiful 64 Chevelle station wagon.
But wait.
There’s more!
Factory bucket seats, a factory console, a 502 and an M-21.

Giddy-up!!
My buddy Jeff Schwartz – the man behind Schwartz Performance – brought this beautiful 53 Chevy pick-up out to the West Coast Nationals to shake it down. 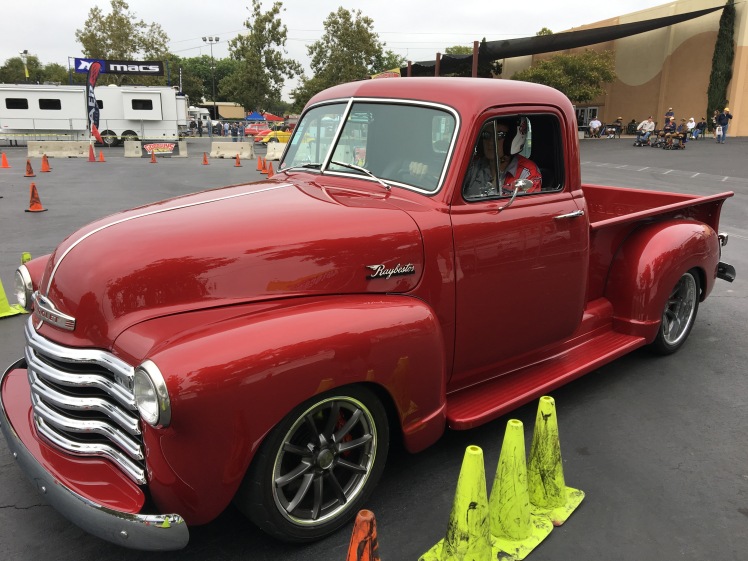 The truck didn’t have 500 miles on it before Jeff started breaking it in autocross style.
He made more passes on Friday before lunch than most people get in all weekend long.
And, you can win that truck!
How?
Go to http://www.raybestosbuild.com
Pretty cool right?
And to whoever wins that little red truck I can assure you, it’s well sorted out.
I’m easily distracted…
I was in mid-conversation when I heard a wondrous sound.
Then I saw this:

Later I had to apologize to the guy I was talking to.
I’d seen this car for years in Hot Rod Magazine but I’d never seen it in person.
I love it!!!!
There were some amazing cars out there on the auto cross track.
We had everything from an SCCA Pinto to a Mercury Capri to the usual smattering of Corvettes and Camaro’s. 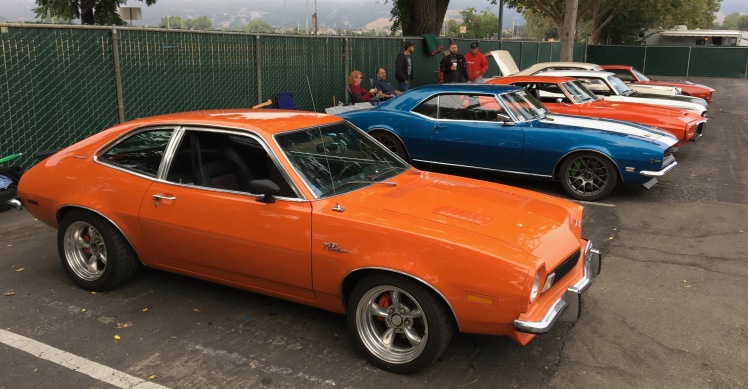 When’s the last time you saw a Pinto ripping around the auto-cross track?
One of my favorite cars was Nick’s ’70 split-bumper.

A full carbon-fiber front end, Lingenfelter LSA, Tremec T-56, Wilwood brakes and Forgeline wheels.
This thing rips and Nick knows how to drive it.
Check him out on Instagram.
After the Goodguys I drove The 55 over to San Francisco.
My first stop was Claes Oldenburg’s Bow & Arrow.

How cool is that?
Then across the Golden Gate Bridge to Horseshoe Cove.

I drove up to Vista Point but the traffic was a nightmare.
Then I went up to Mill Valley to visit my buddy Shark.
The next morning I drove back across the Golden Gate Bridge to the deYoung Museum to see another Oldenburg work of art – the Giant Safety Pin.

But the deYoung Museum is closed on Mondays, so I had to jump up on the fence to get this shot.
Then Land’s End, China Beach and Fort Point.

From Fort Point I drove back across the Golden Gate Bridge to check out the San Rafael Civic Center that was designed by Frank Lloyd Wright.
Unfortunately it was covered in scaffolding.
Then I drove to Reno and went to the National Automobile Museum.
Soooooo many cars.
One of my favorites was the Jerrari. 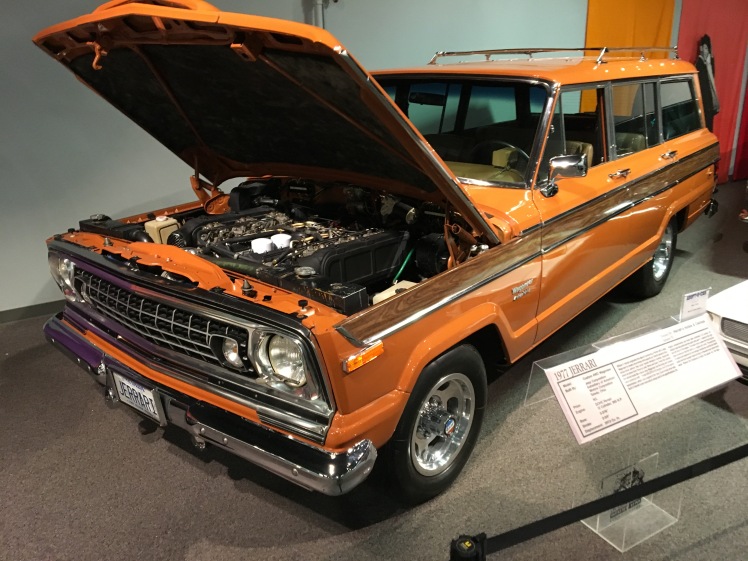 A Jeep Wagoneer with a 365/GTB4 12-cylinder Ferrari engine under the hood!
I love the mag wheels.
And with a top speed of 140mph I’m all in.
After the museum I stopped by the market.

Then I was on my way  to Yosemite National Park.

Which happens to be at the top of Tioga Pass.

Carol was the nicest ever, thanking me for bringing “such a cute little car all the way up here.”

Yosemite is amazing.
I set up camp for the night at Porcupine Flats. 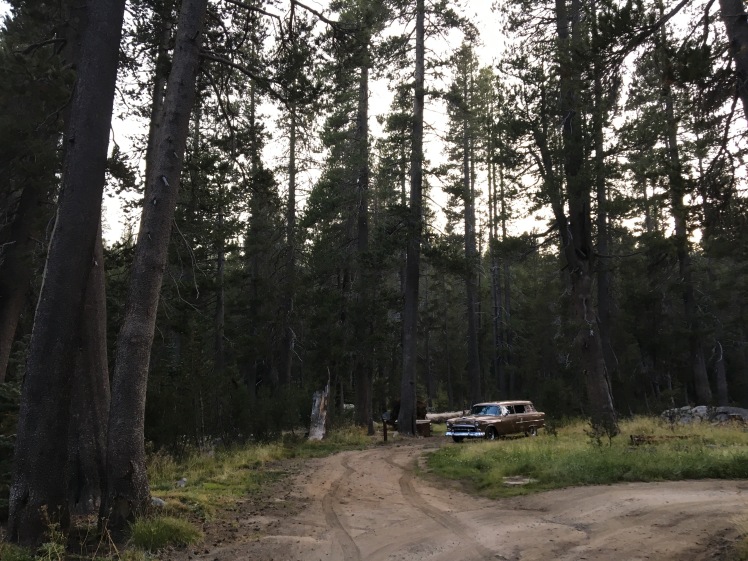 The 55 looks right at home out there in the woods. 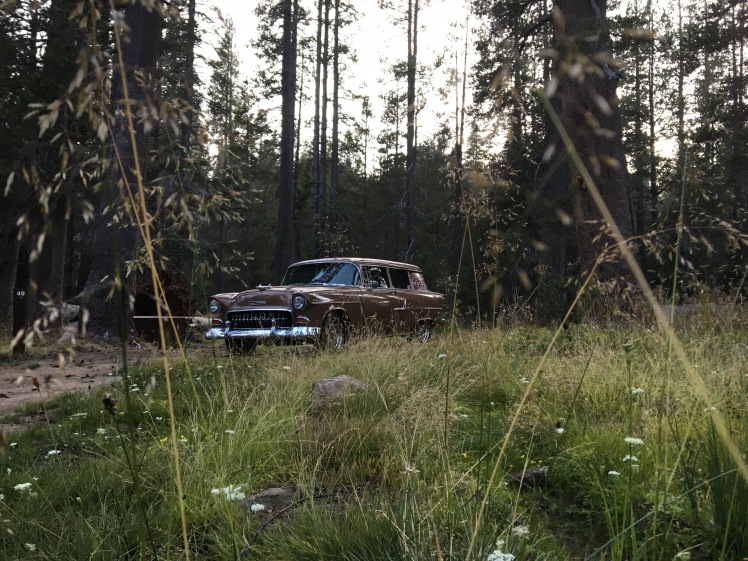 The next morning it was cool and beautiful and quiet until 350 cubic inches of Chevrolet small-block came roaring to life.
After a minute, the Sniper’s LED Handheld display read that the MAT was 36 degrees.
But I was nice and warm inside The 55.
I’m a sucker for morning sunshine, and when I came around the corner and saw this:

I had to stop… 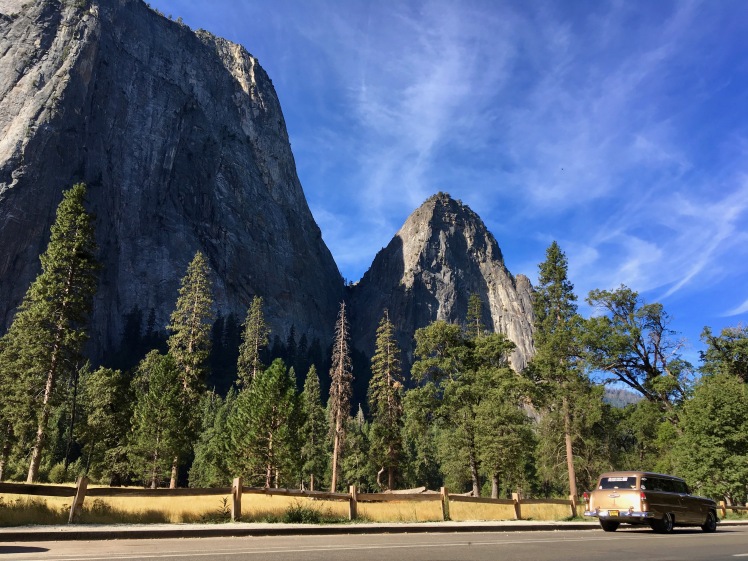 A few weeks ago Yosemite was closed because of forest fires. 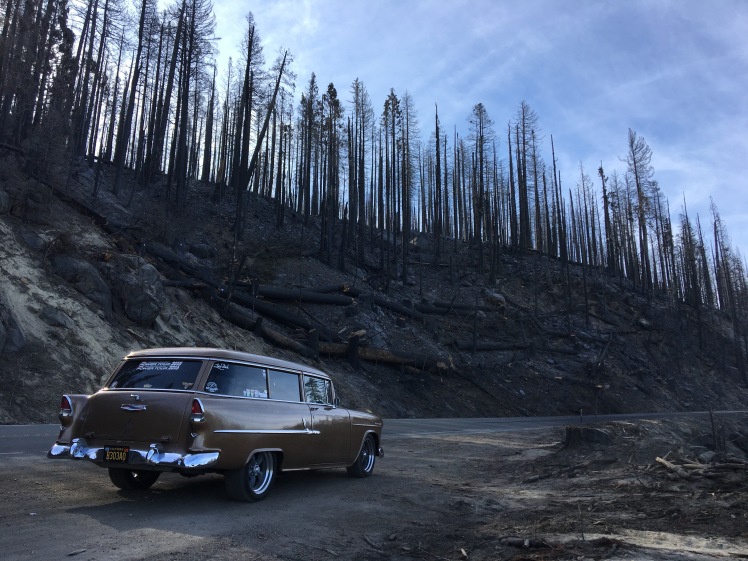 It was crazy to see all the burnt up trees still standing tall like an army of the dead.
And the pink fire-retardant still covering the road and trees.
The smell of it was thick in the air.
The road to Glacier Point was still closed because of the fire so I couldn’t make the trek. 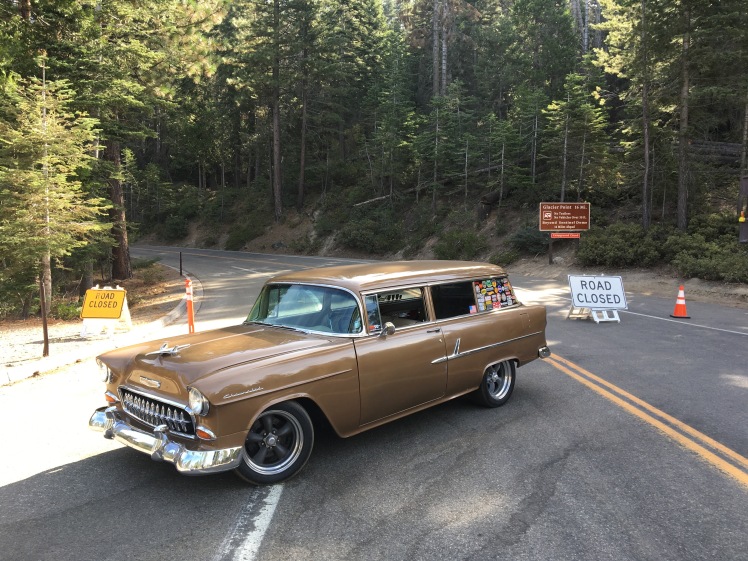 Gotta save it for the next time.
After Yosemite I fueled up in Fresno and went back up to see Kings Canyon National Park. 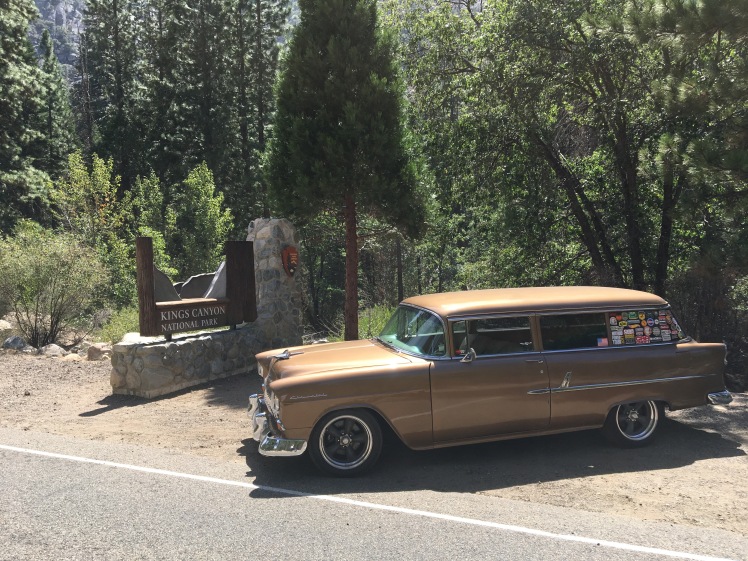 It’s after Sequoia and well worth the drive.
I had the see The Nation’s Christmas Tree: “General Grant”
1700 years old and 268 feet tall. 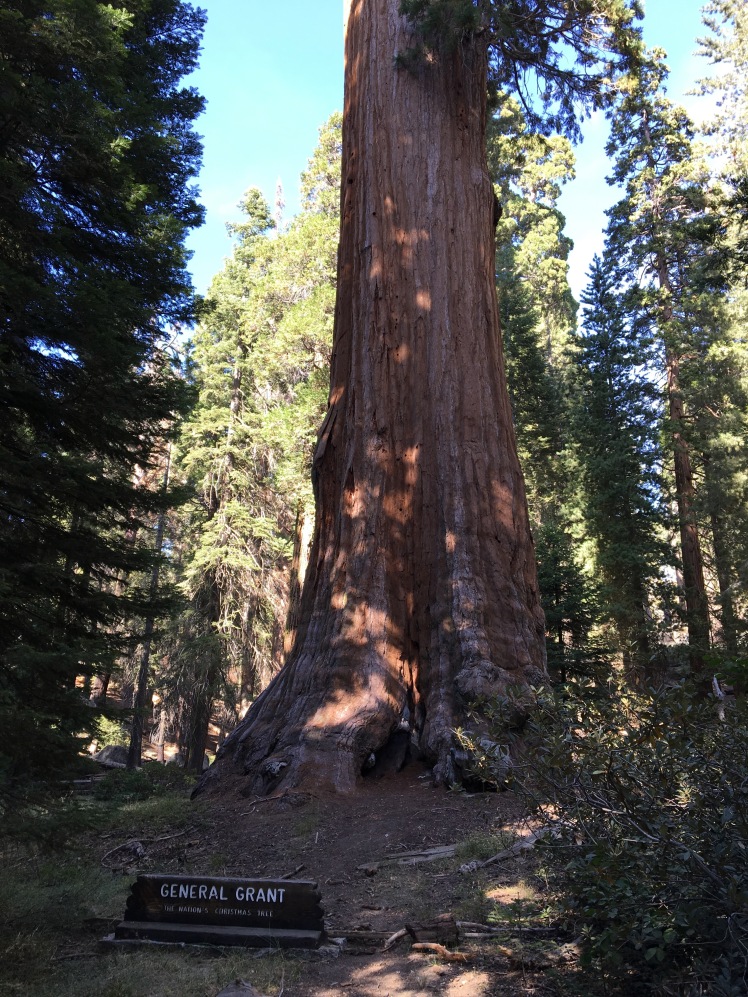 And so big I couldn’t get it all in one picture.
It is amazing!
Here’s a little clump of sequoias in the General Grant parking lot. 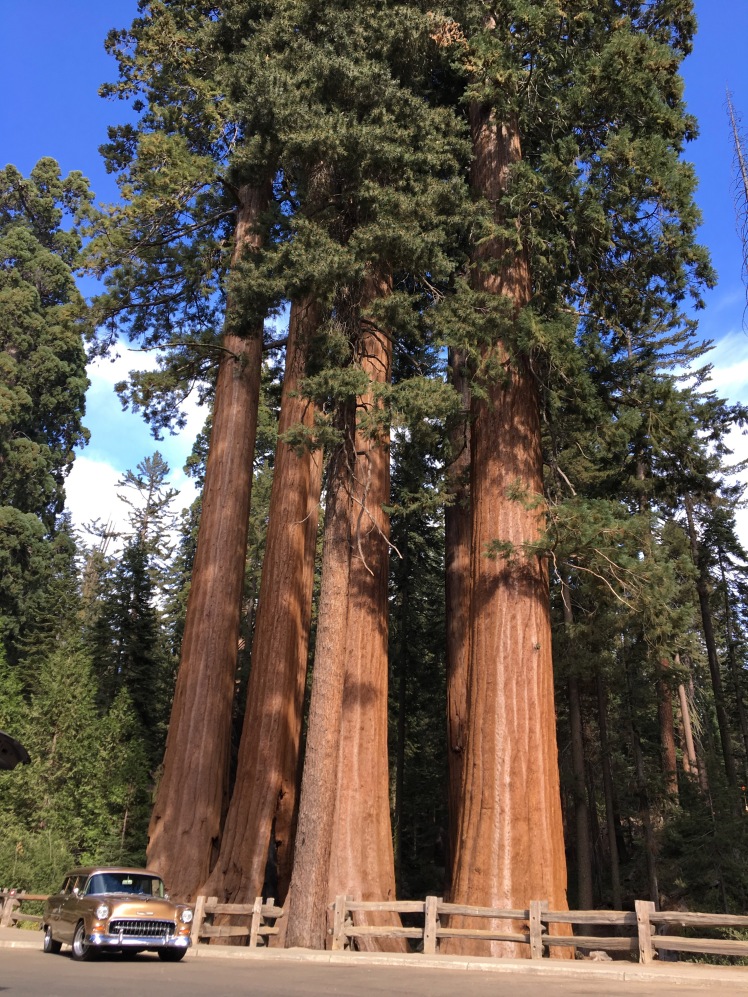 Coming down from Sequoia I stopped in for a rest at the Easy Rest Inn.