Car show season is back.
And I couldn’t be happier.
My first show of the year is the Goodguys Rod & Custom 9th Spring Nationals at the Texas Motor Speedway in No Limit, Texas – Dallas / Ft. Worth.
It’s a super cool venue – the infield of a full-on race track – both NASCAR and Indy Cars race there.
My next event is the following weekend:
The Goodguys 10th Spring Nationals in Scottsdale, AZ.
I had always flown out to the Texas event.
But I hadn’t had a good drive in The 55 in awhile.
And it was ready.
So was I!
I also had a few things on my “Road Trip List” that I wanted to see in between Los Angeles and DFW.
And then from DFW back to Scottsdale.
One thing’s for certain – it’s gonna be an adventure.
I left LA and drove South down The 5 freeway towards San Diego to get one last look at the Pacific Ocean before we turned east on The 8.
We stopped off at the Imperial Sand Dunes and checked out the Old Plank Road.

It’s on the list of “Dangerous Roads” in North America.
Built in 1914 to help cars get across the Sand Dunes from Arizona to California.
It was a one-lane road of wooden planks that was literally, laid across the sand.
They moved it by horses when it got covered up by the blowing winds.
A cool little piece of history.
I’m thinking I may need to look into getting a windshield washer system for The 55.

That’s yellow, butterfly bug-juice all over the front end.
In Yuma we stopped by the Tropicana Motel.

Then, after a stop for fuel and to clean the bug carcass’s off of the windshield we were on our way to Tucson.
Where we stopped into the Tucson Inn.

My America the Beautiful Pass expires at the end of May so I’ve gotta get in as many National Parks as I can until then.
Since May of last year we’ve been to 12 National Parks.
Saguaro National Park will be lucky number 13.
The park is split in half by the city of Tucson.
We went to the East side to do the Cactus Forrest Drive. 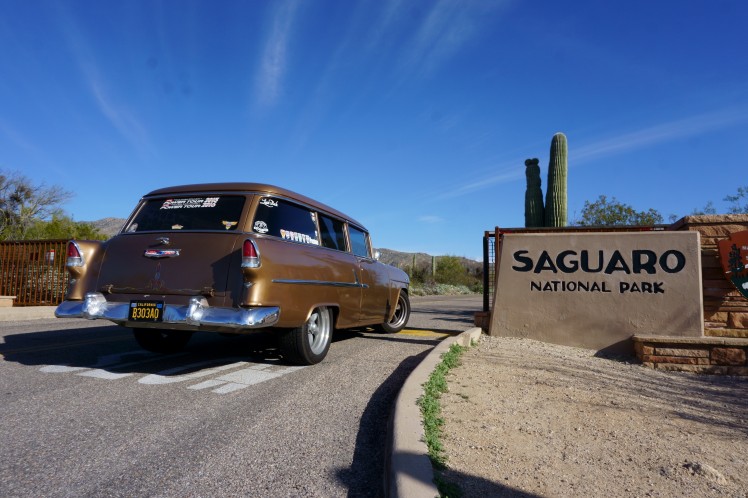 Spent the night in Tucson.
Got up early the next morning and went south on The 19 to the Longhorn Grill.

Our next stop was Tombstone.
We drove back up The 19 and took exit 69 for Sahuarita Road.
It’s a wonderful, straight flat road with no traffic.
Need I say more.
We joined back up with The 10 and exited at Benson for 80 South into Tombstone. 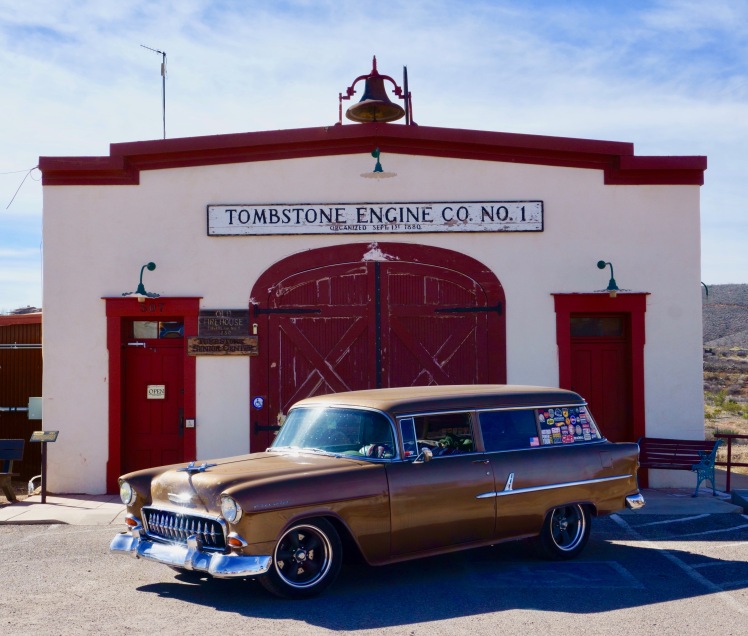 The back roads out of Tombstone to get back up to The 10 are empty and fantastic..
Once we got back on The 10 I spotted this cool little rest stop and just had to pull over. 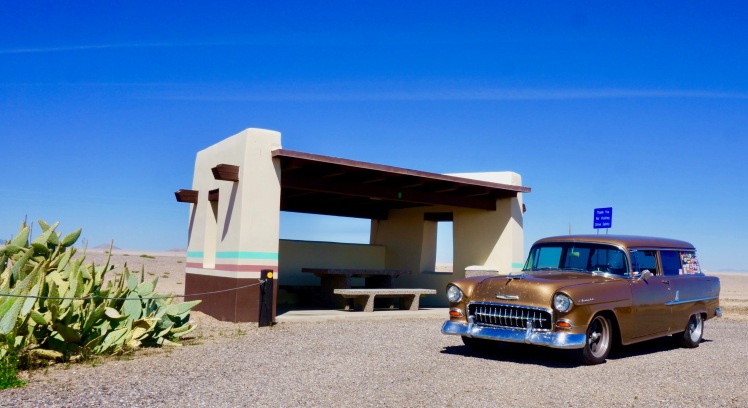 Then we stopped by the Butterfield Stage Motel in Deming, NM.

I love art, so we had to stop into the Roadrunner rest stop just outside of Las Cruces, NM.

Las Cruces is home to the biggest Chile in the world. 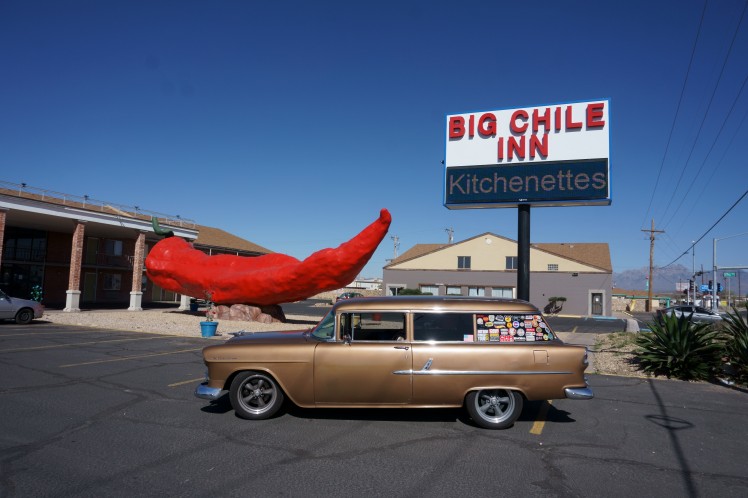 It’s also home to the worst network service ever.
My iPhone would go from 5 bars to “no service” with no warning.
And it only happened when I was in need of directions.
But we eventually made it to the Townhouse Motel. 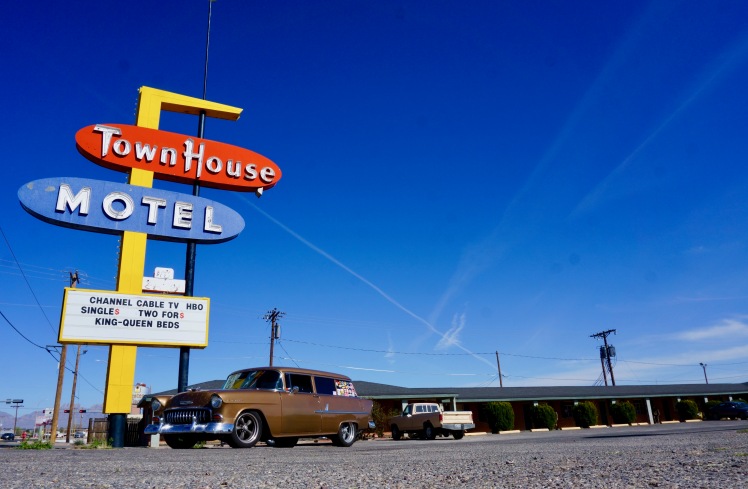 And the Sands Motel. 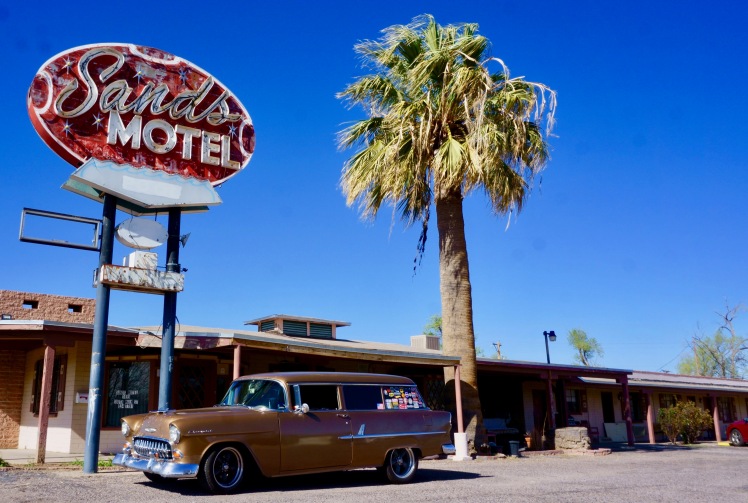 Then we drove east on Highway 70 out to the White Sands National Monument.
We had just crested a pass when I saw a Nike Missile sticking straight up into the air.
I stepped on the Wilwood brake’s and pulled over to check out another cool rest stop.
It’s gotta Nike Missile.

On the other side of The 55 is a spectacular view of the entire valley.
If you wanna see it , you’re gonna have to go there on your own.
Which I highly recommend.
Back on the highway we were making good time until.
One mile before White Sands National Monument we were stopped for a boarder inspection.
We made it thru with all of the Tecate’s accounted for.
White Sands National Monument.
Driving in, I had to keep reminding myself it’s not snow.
It’s sand.
It’s the largest white gypsum dune field on earth.
And it’s like a fine powder.

This trip has given me a whole new perspective on rest stops.
And, in my opinion New Mexico has some of the coolest rest stops around.
Check out the cool picnic areas at White Sands National Monument. 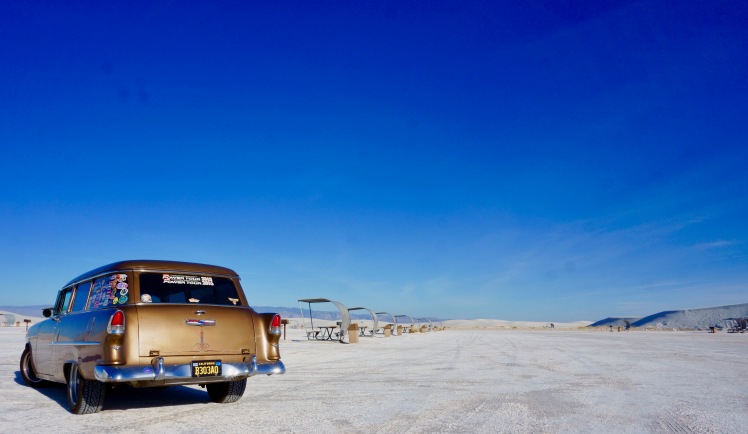 So 50’s.
So right.
We drove back to Las Cruces and spent the night.
Back on the road again early the next morning, we drove on The 10 south and made it into Texas, but traffic wouldn’t let me stop for a picture at the state line.
After a few miles into Texas we turned off onto 375 and went up a little pass thru Franklin Mountains State Park.
I spotted another cool rest stop but we were moving so I wasn’t stopping.
Once we got on highway 180 we were stopped for another boarder inspection.
They sure are thorough around here.
I had gone well over 200 miles since my last fill-up, and the sign after the boarder inspection station read 120 miles until the next services.
Looks like I’m finally gonna put the CPP 29-gallon fuel tank & the Holley Sniper EFI to the test.
We made it to Guadalupe Mountains National Park.
Number 14.

And I finally got my Welcome to Texas picture.

At the entrance to Carlsbad Caverns National Park there was a gas station.
But I didn’t fill up.
30 miles up the road in Carlsbad was a Phillips 66, so I went up to tour Carlsbad Caverns.

It is unreal.
Pictures don’t do it justice.
If you haven’t been – you need to go!!
Oh yeah – number 15!
From Carlsbad Caverns it’s about 30 miles into the city of Carlsbad.
If I’m getting 15 miles per gallon it’ll take me two gallons to get there.
We made it with three gallons to spare!!
Back into Texas we stopped by the Andrews Motor Inn. We spent the night in Abilene, then we were off to Dallas early the next morning.
We made great time into DFW.
But, Dallas, as it turns out, is its own photographic journey.
I’ll post it next.
Now get out there and drive it!
I hope to see you out on the road.
#idrivea55

Today would’ve been my moms birthday.
Any other @uspostalservice fans out there?
On my way back from the Hot Rod Power Tour I was treated to a spectacular lighting show in Oakley, KS.