After the Street Machine Nationals in DuQuoin, I left Illinois and headed northwest towards Des Moines, Iowa.
The Goodguys 31st Speedway Motors Heartland Nationals was happening the next weekend and I was scheduled to be on the autocross mic.
I had never been to their Des Moines show.
I’d heard it’s their biggest and best show of the season so was looking forward to seeing it for myself.
On my way up to Des Moines I thought I’d see some sights.
Like the the Soulsby Service Station in Mount Olive, IL right on old Route 66.

It was built in 1926 – the same year Route 66 was commissioned – and it’s listed on the National Register of Historic Places.
It’s super cool!!
From the Soulsby Service Station I drove north to the Shrine of Our Lady of the Highways in Raymond, IL.
It’s a shrine that was built back in the 1950’s to protect travelers.
I neglected to get a picture of it but I did take a video that I’ll post a link to.
From the Shrine of Our Lady of the Highways I made my way to the Brick section of Route 66.
Yes… Part of Route 66 was made out of bricks – and it survives to this day!!

It was built in 1931 and is a little over a mile long.
Again – it’s like stepping back in time.
Check out the video of the Route 66 brick section, the Soulsby Service Station, and the Shrine of Our Lady of the Highways here:
https://youtu.be/SNPfMxI0eZ8
I headed west towards Quincy and I found this Batwing that’s now being used as Rex Battery. 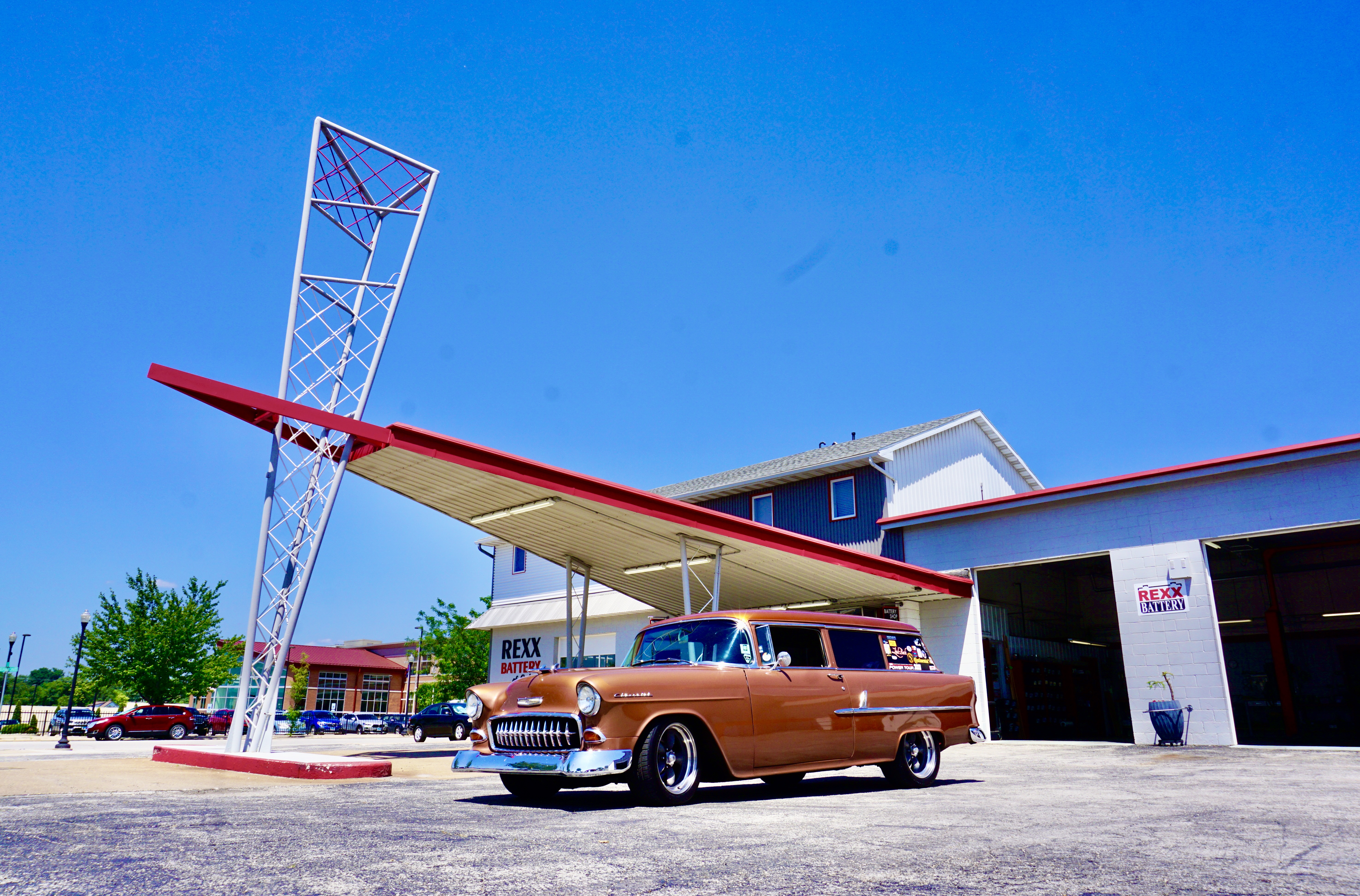 Then I drove up the Great River Road – another Nationally designated Scenic Byway.

I found this cool Post Office in Hamilton, IL. 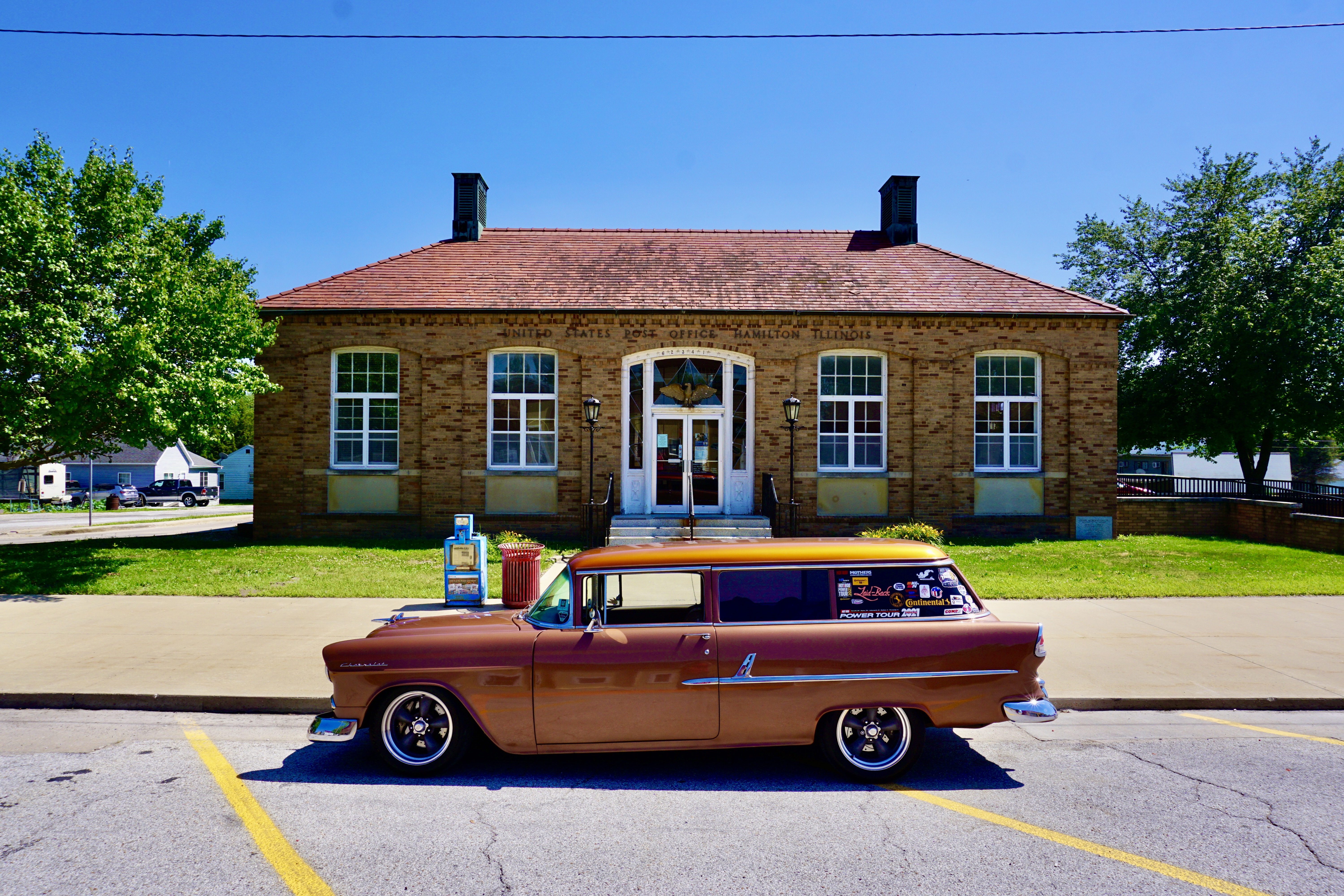 From Hamilton I crossed the Keokuk-Hamilton Bridge and I was in Iowa.
Not even a mile from the state line I found another Batwing now being used as Keokuk Auto & Exhaust.

As you know… I love these old batwings.
Not even a mile down the road the Arrowhead Bowl stopped me in my tracks!! 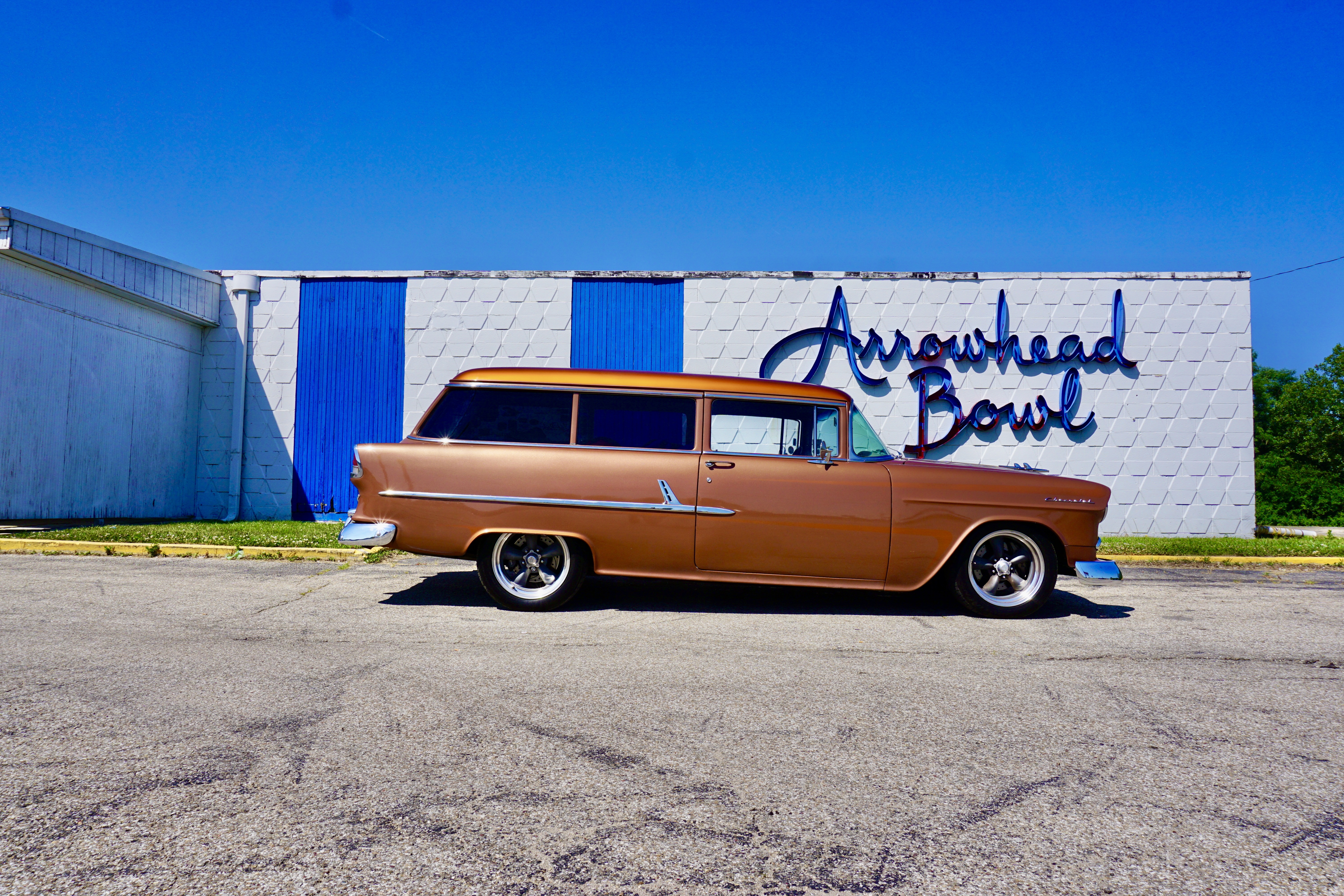 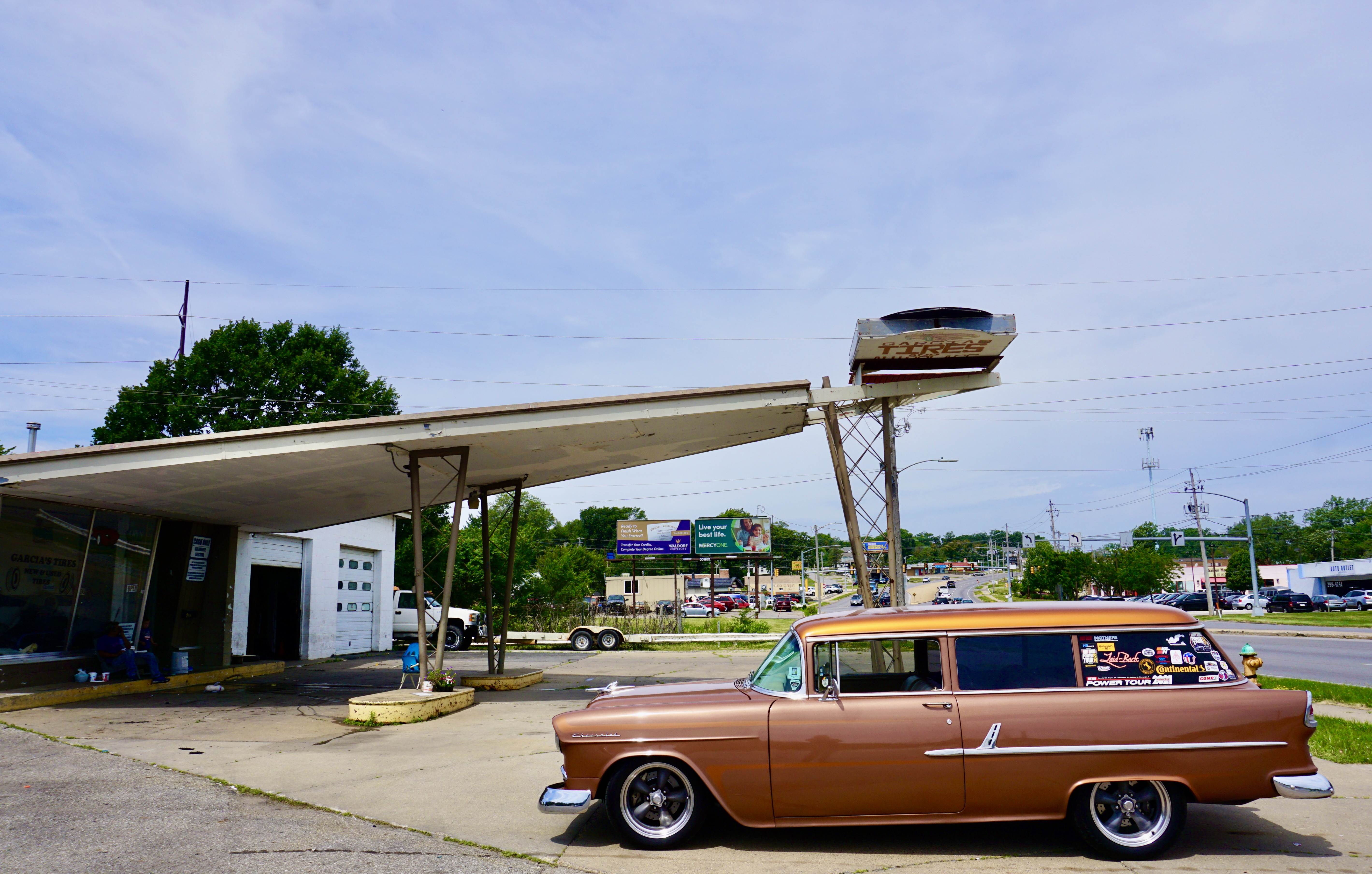 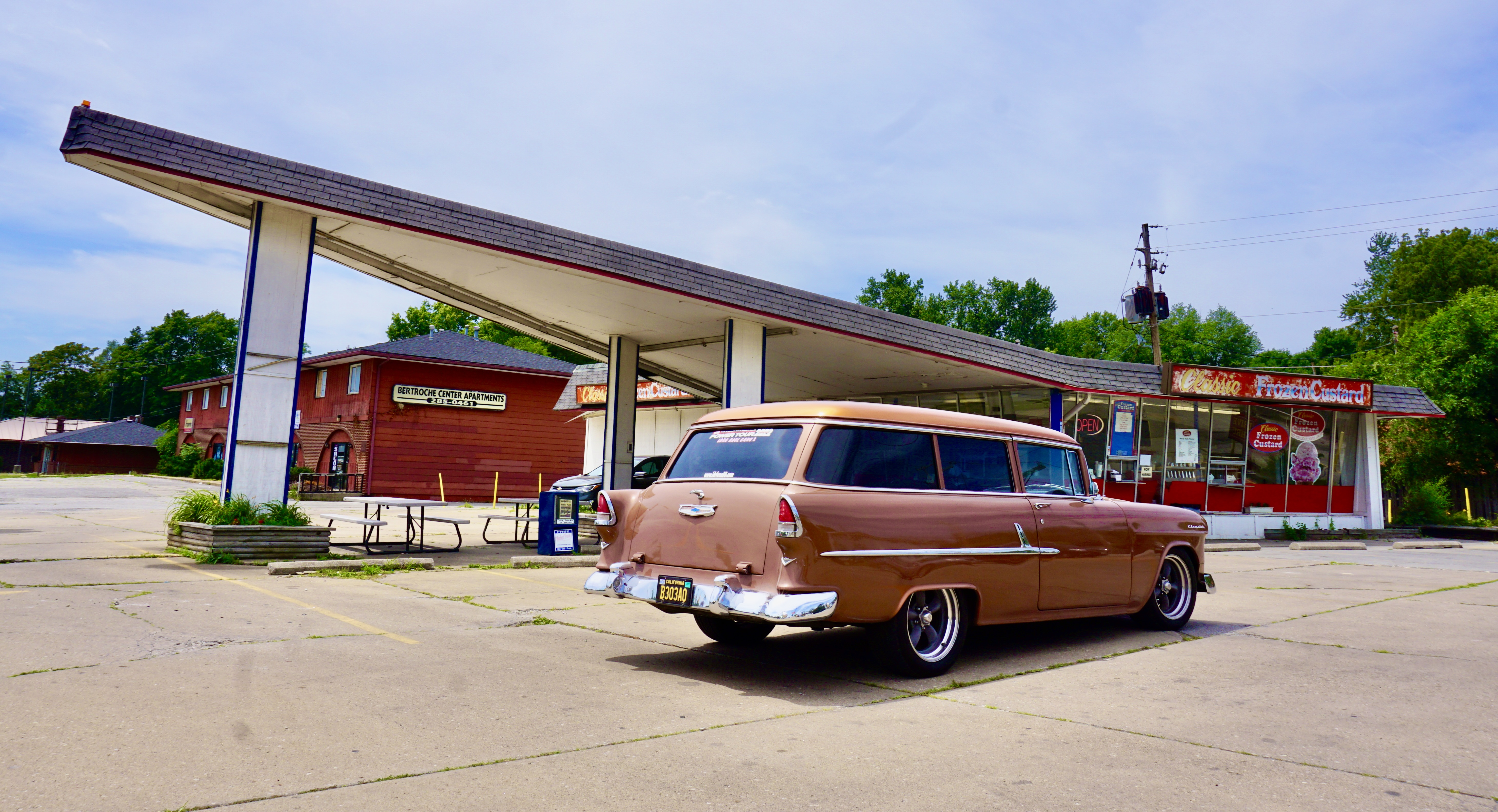 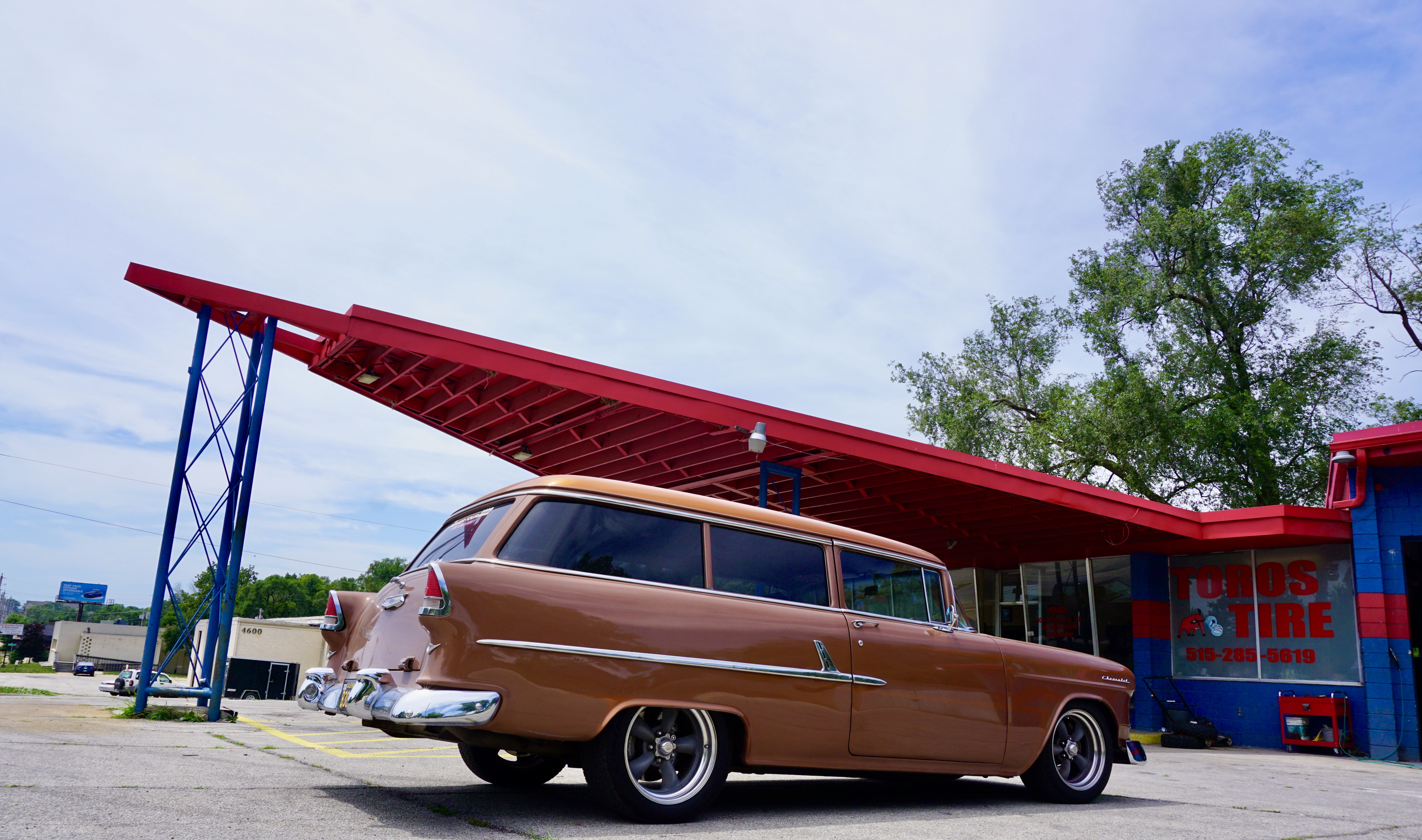 The Goodguys show is held at the Iowa State Fair Grounds and it did not disappoint. 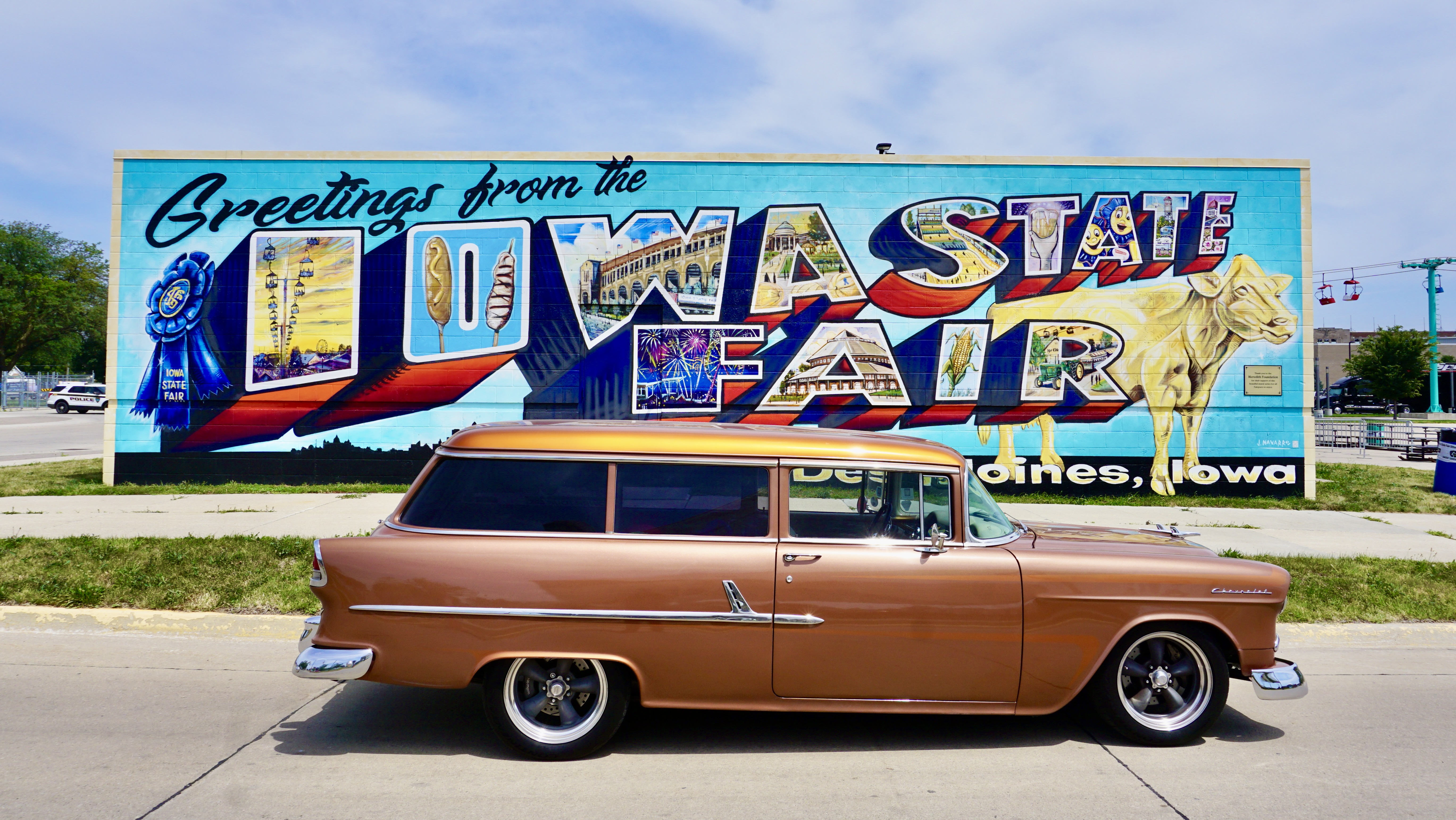 It’s a fantastic show!!
The fair grounds are awesome and so are the cars.
I heard there were over 5000 cars registered there!!
Amazing.
If you like Autocross – check out the Duel in Des Moines Autocross shoot-out here:
https://youtu.be/Xhfx-9-WiVQ
After Des Moines I was headed to Columbus for the Goodguys 24th Summit Racing Nationals.
On my way I stopped by the Brooklyn Service Center in Brooklyn, Iowa.

The Brooklyn Service Center was built in the 1930s and is still selling gas and offering repairs.
And it still has its original Standard Oil lettering.
How cool is that?
I continued east to Joliet.
The last time I was there I didn’t get the shot I wanted…
Remember “The Blues Brothers” movie?
It’s one of my favorites.
I had to go back and get the shot of Joliet Jake getting out of prison.
Here’s the original:

“Well thank you pal – The day I get out of prison my own brother picks me up in a police car…”
Here’s the video I did of Old Joliet Prison:
https://youtu.be/kXpM4eOlqYM
From Joliet I went east to Gary, Indiana.
I found some cool places on the internet in Gary, IN – but I wasn’t prepared for what I saw when I get there.
The last time I went through Chicago my GPS took me to a gas station in a not-so-nice part of town.
Not-so-nice that as I was fueling-up a policeman drove up and asked what I was doing there.
I told him I was going to see the Reverend Cleophus James at the Triple Rock Church.
He didn’t know what I was talking about but he did tell me I shouldn’t be in this part of town.
That part of Chicago was kinda sketchy…
Gary, Indiana was post-apocalyptic and super sketchy!!
It looked like it was a scene out of a movie or like a bomb had gone off.
My first stop in Gary was Walt’s Fine Food and Cocktail Lounge.

That cool sign is still standing, but I couldn’t find Walt anywhere…
I continued down the street and came across the Palace Theater. 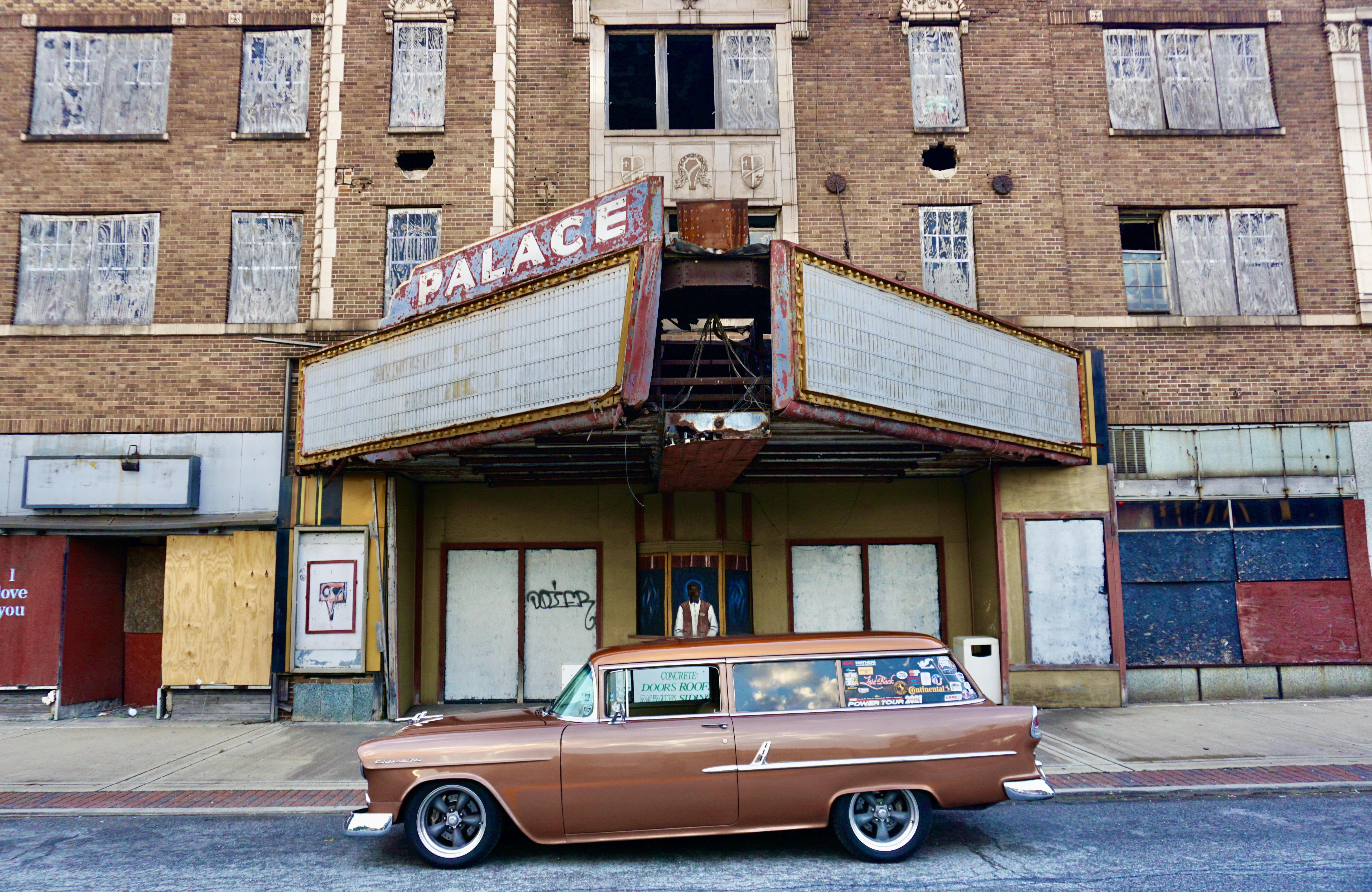 Gold!!
It’s completely abandoned with all of its windows boarded up and it’s super-cool.
Directly across the street I spotted this and I couldn’t resist.

Down the street is this beautiful building – Jack’s Loan Office.

Check it out on Google Maps – they’re using this picture.
I wanted to drop off some laundry at Smith’s Cleaners but they didn’t look open… 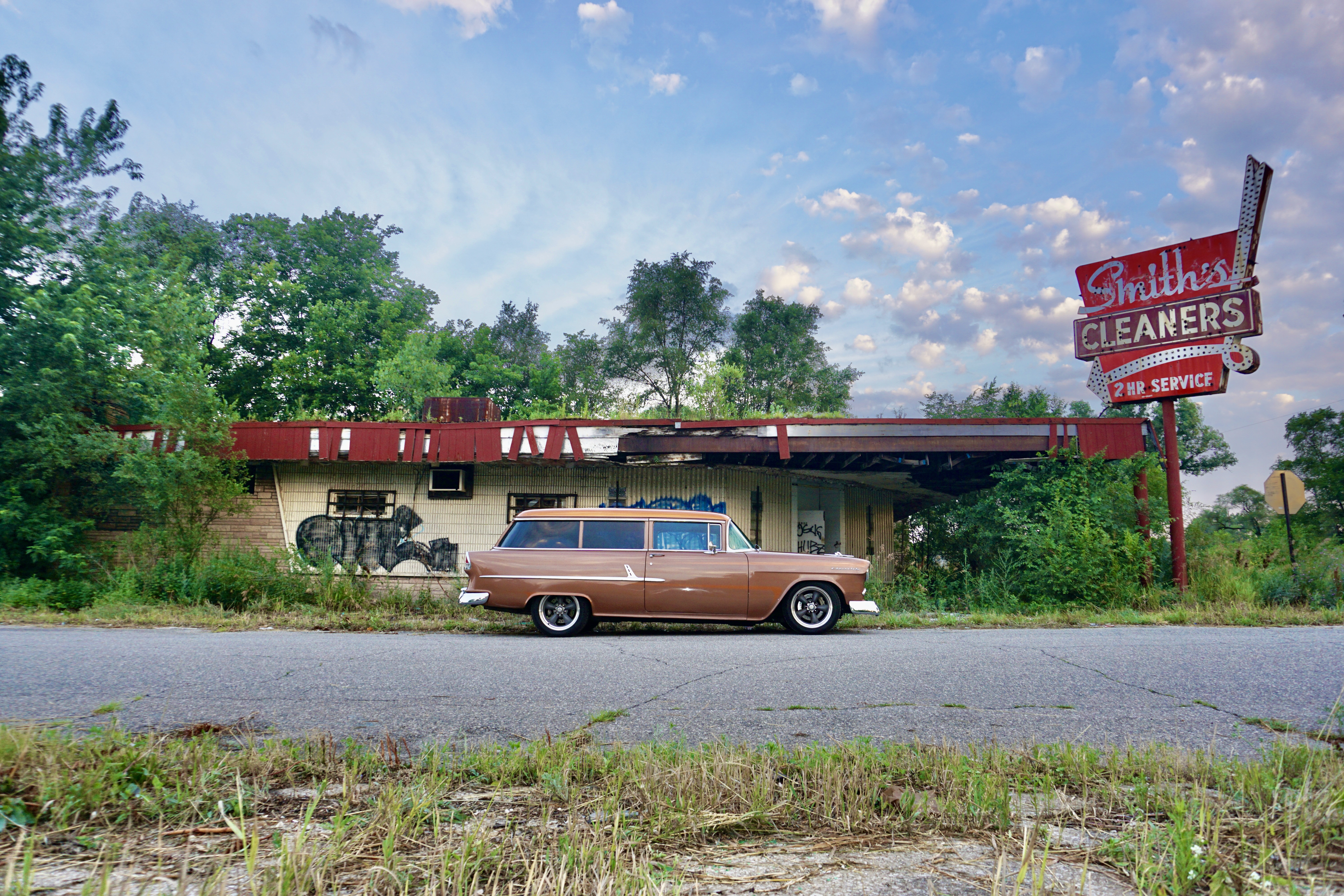 But look at that amazing sign!!
I passed right by Michael Jackson’s childhood home and went straight to another Batwing.

This one was pure gold.
I wish I had stayed longer and got more shots of it, but I didn’t want to overstay my welcome in Gary, Indiana so I got outta there while the getting was good.
I got back in The 55 and headed to Lima, Ohio and Mello-Creme Donuts.

Mmmmmmmmmmmmm… Donuts.
After Mello-Creme Donuts I was headed to Columbus.
I got to the host hotel and settled in.

Columbus is where we give away the Goodguys give-away vehicle.
Everyone who has qualified to win the vehicle gets a key.
Then – one by one their names are called and they get to try to start it with their key.
If it starts – they’re a winner!!
This is the give-away truck

These are all the keys 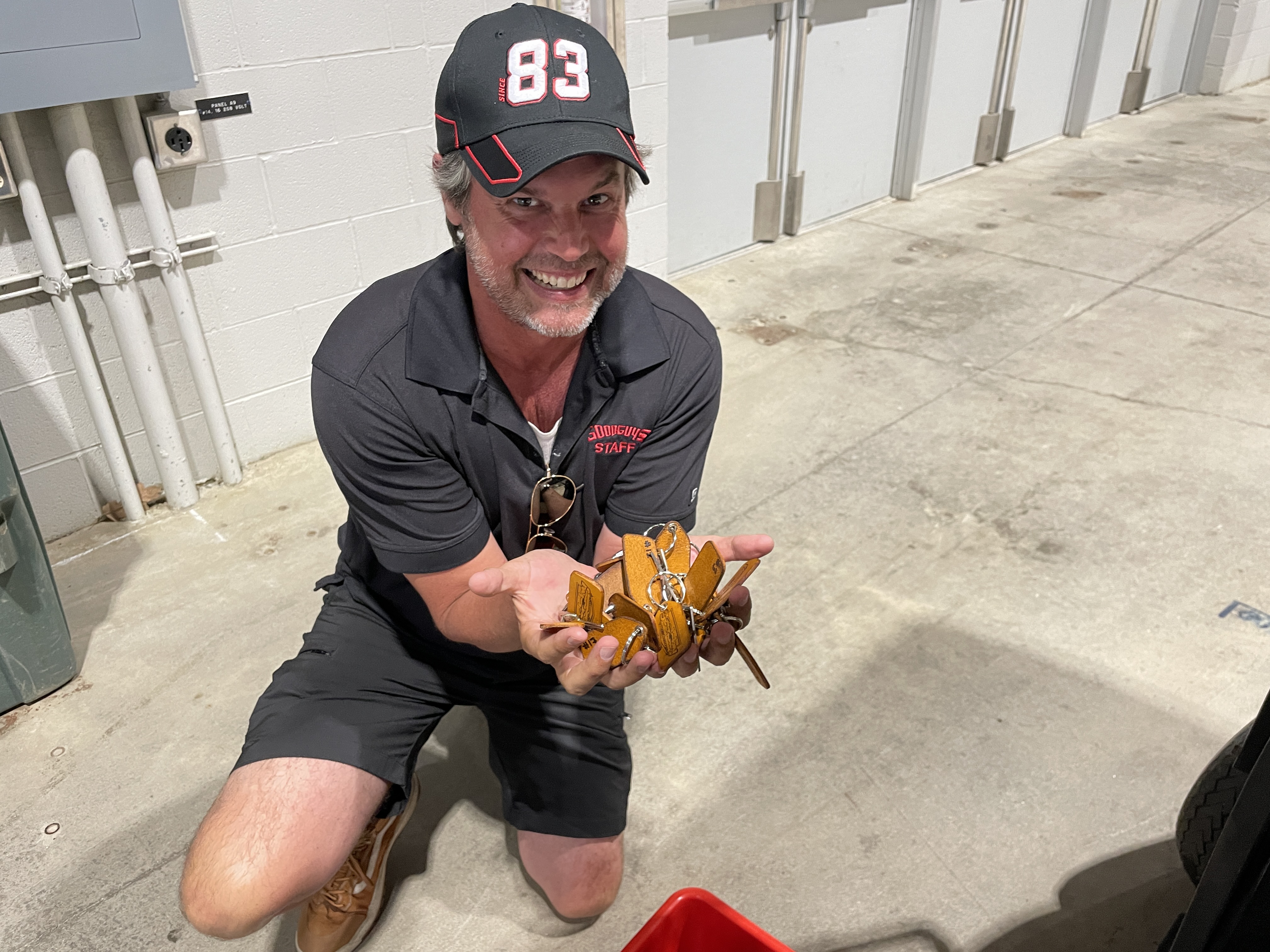 After the show everyone goes to the host Hotel.
And when I say everyone – I mean everyone!!
It’s crazy in the hotel parking lot – one of the best car shows you’ve ever seen.
And it’s in a hotel parking lot.
And – as an added bonus – I got to see my buddy Chris Baker – Mr. C-10 – and my C-10 Nationals co-host Wynn. 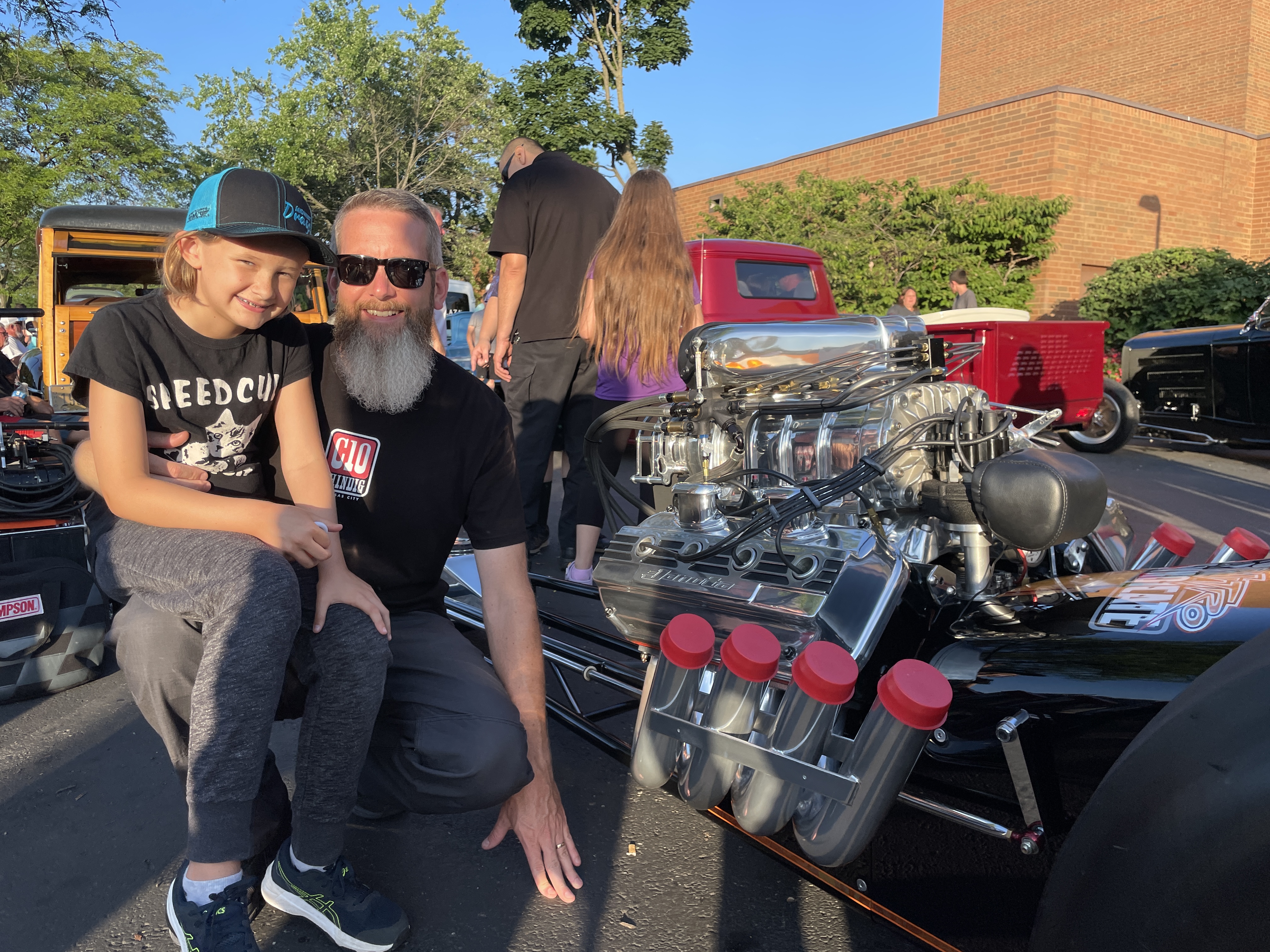 Two great Goodguys shows in two consecutive weekends.
Now I’m off to host the Summit Racing Autocross Week.
It’s just like Drag Week but it’s Autocross.
Thanks for coming along for the ride with me in The 55.
Until the next time.
I’m Jeff Thisted and I drive a 55.
#idrivea55