Monday morning we got up early and hit the road.
It was a grey outside.
Overcast, cloudy, wet and cold.
But we were out on the open road.
“Get the motor running.
Head out on the highway.
Looking for adventure.
And whatever comes our way.”
From the Texas Motor Speedway we took Highway 114 North until we could link up with Highway 287.
At the town of Vernon we turned right and headed north into Oklahoma for the state line photo. 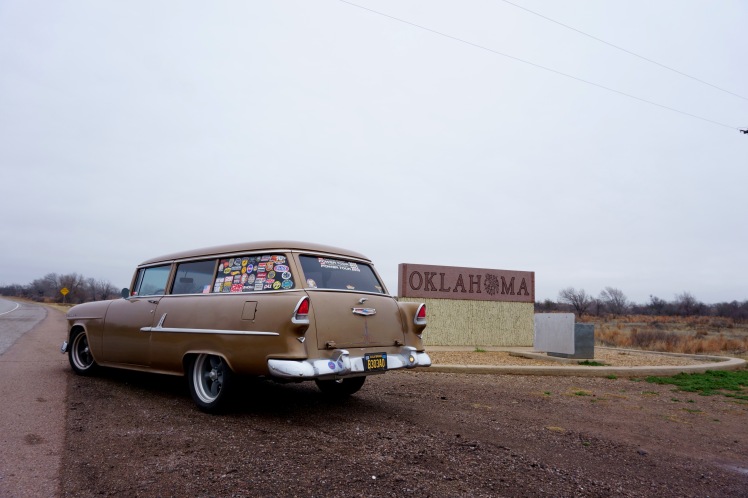 I hadn’t fueled up since we were on the outskirts of Ft. Worth over 300 miles ago.
Using the Unocal 76 fuel app, I found a 76 station in Altus, OK.
They even took mobile pay where you can pay with a credit card linked to your phone.
And they give you a .10 per gallon discount for using mobile pay
So it’s a win-win.
I refueled The 55 and wouldn’t you know it, there was a WalMart across the street.
I got some Monster Energy Drinks and a box of Little Debbie apple pies.
Great road food.
Leaving Altus we took Highway 62 through East Duke and Gould, OK.

If you’ve got a U.S. Post Office in your little town, it makes your little town legit.
I’ve been seeing a lot of these lately in little towns.
And my plan is to stop at more of these when I see them.
I almost drove past this awesome abandoned gas station in Hollis, Oklahoma. 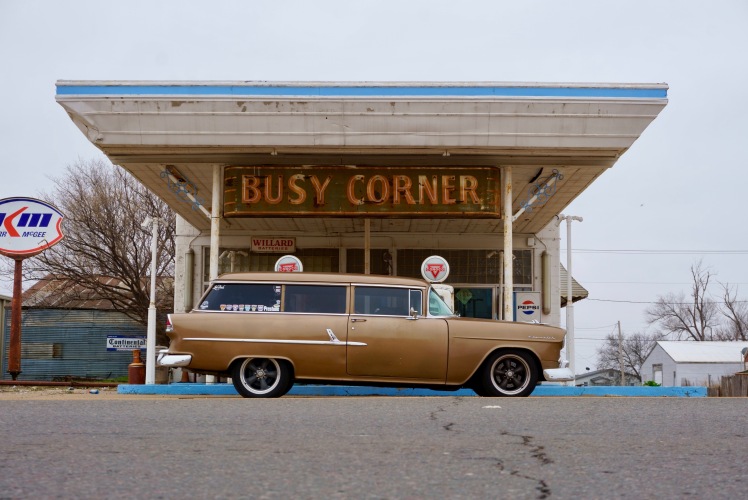 How cool is that?
From Hollis we drove back into Texas  and took Highway 83 North to Shamrock. It was days away from St. Patrick’s Day so the whole town was decorated.
Shamrock, Texas is where Pixar got the inspiration for Ramones Body Shop in the movie “Cars.” 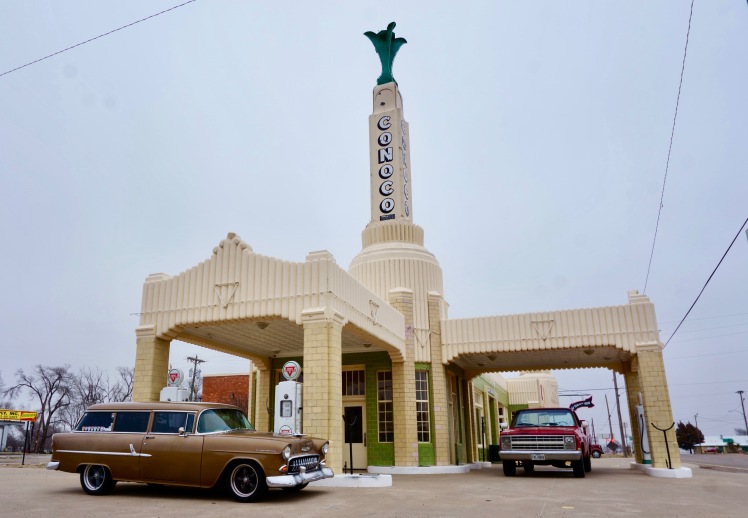 It’s also where Ken Block shot a segment of their Gymkhana 10 video.
It’s at minute 13.
Here’s where he hit the curb and broke the rim on the truck.

Driving thru these towns is like taking a step back in time.
Except for the Wal-Marts and mobile pay…
From Shamrock we got on Interstate 40 and headed west.
I’d heard about it for years, but I had never been there.
The Big Texan Steak Ranch.

Home of the free 72oz. steak…
If you can eat it in an hour.
My buddy Mike tried it and didn’t fare so well.
And let’s be honest, no one like getting the meat-sweats.
It’s a true tourist-trap, with really good food.
On the way out of Amarillo, I had to stop and see Cadillac Ranch with my own eyes. 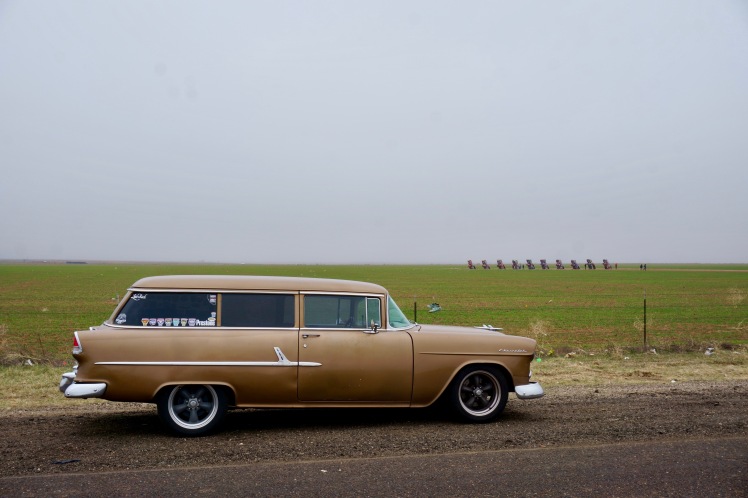 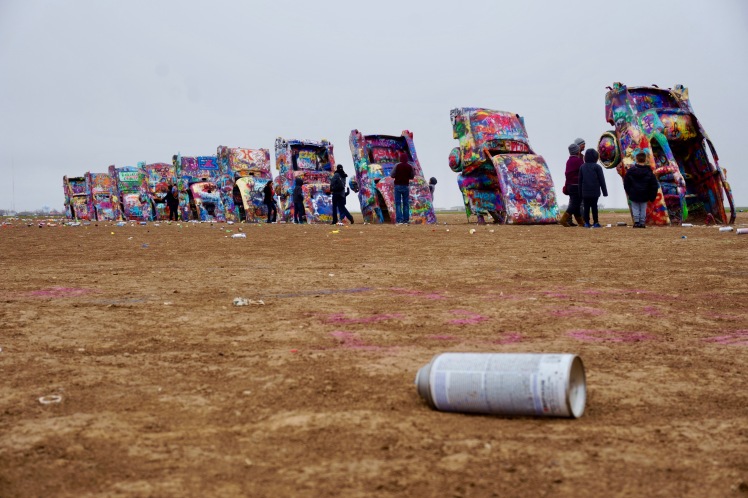 I felt a little out of place…
I was the only one there without any spray paint.
Then back onto I-40 and back into New Mexico 20 or so miles into New Mexico is the little town of Tucumcari.
It’s got a lot of The Old Route 66 haunts the have been mostly left behind to rot.
The most famous is the Blue Swallow Motel 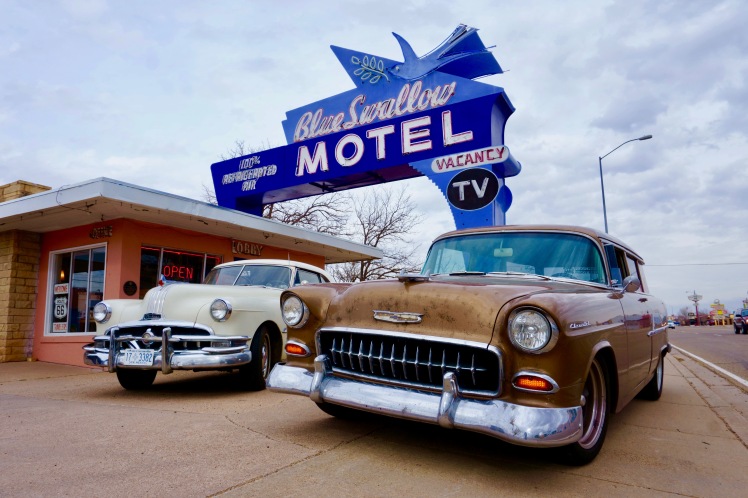 Tee Pee Curios is one of my favorites

And I don’t know if this was a grocery store or what, but it was completely abandoned.

And I thought it was pretty cool
Hey there Buckaroo From Tucumcari we boogied thru Santa Rosa and spent the night outside of Albuquerque.
In my next installment I’ll tell you all about Albuquerque, Petrified Forrest National Park and snow in Flagstaff, AZ.
Now get out there and drive it!
I hope to see you out on the road.
#idrivea55